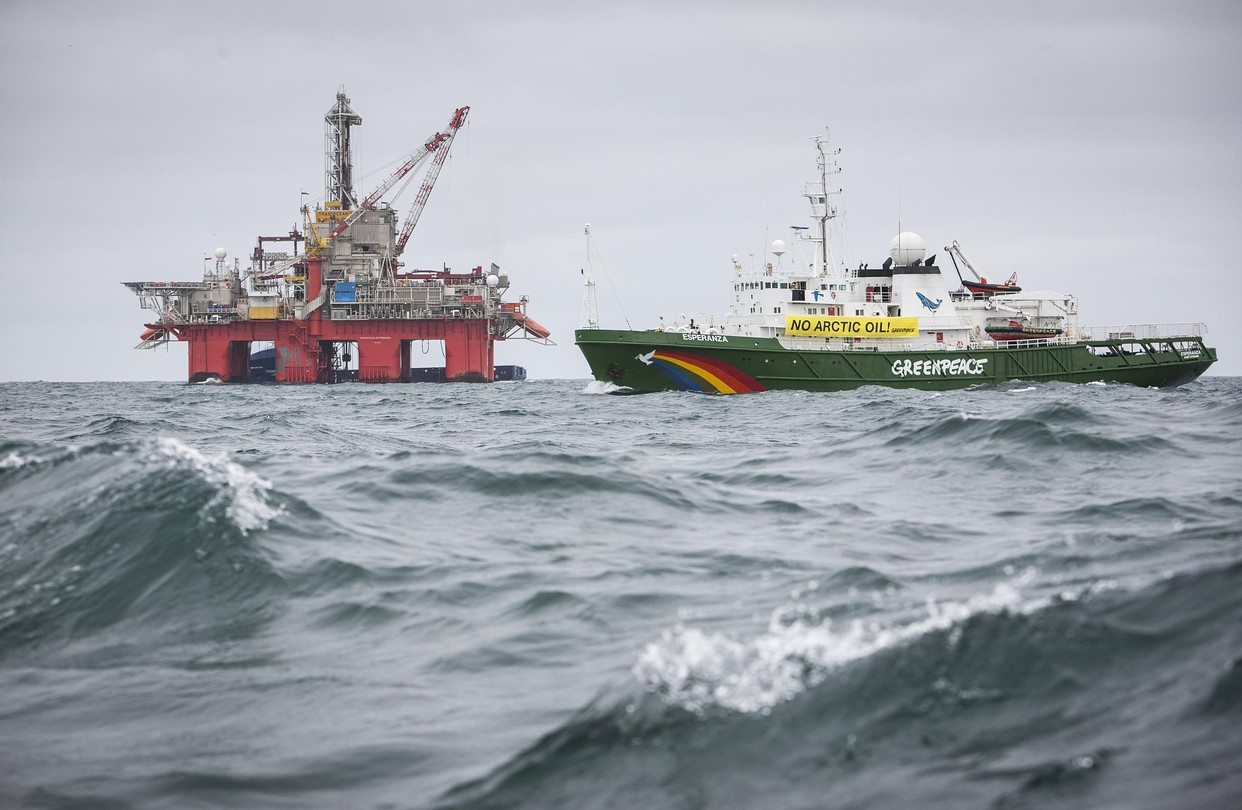 They staged Svalbard’s first-known political protest by seizing the coal pier at the Svea coal mine – then got busted upon departure for having vast amounts of undeclared beer.

They shamed Norway’s government by exposing oil exploration tests in Svalbard that were hastily abandoned. But their seizure of an oil rig near Bjørnøya was laughed off by Statoil since it was dry and abandoned, and drilling had already moved further north.

The distinctive rainbows on the front hulls of Greenpeace ships serve as a greeting from environmental activists, celebrities, researchers and others making frequent voyages to Svalbard on quests for science, politics and publicity. But the colorful sea stories of one of its pioneer polar vessels are at an end as Greenpeace announced Wednesday the Esperanza is being retired after 22 years of operation.

“As the fastest ship in the Greenpeace fleet, the Esperanza was often used to chase high-speed vessels and to confront environmental criminals few others could catch,” Greenpeace declared in a press release announcing the retirement.

The Esperanza’s ice-class credentials allowed those aboard to pursue a multitude of aggressive quests in the Arctic and Antarctic, but it also has “a much larger carbon footprint than other Greenpeace vessels and despite the constant efforts of dedicated crew, technicians, volunteers and supporters to hone and improve the ship’s technical features, its fundamental biology does not allow it to be consistent with Greenpeace’s vision for a zero-carbon future.”

“The crew of the Esperanza launched solar-powered aircraft, helicopters and submarines from its decks and gave the ship many green renovations from the start of service and throughout its life,” the press release noted, “but in the midst of a climate emergency with environmental crimes still being committed all over the world, Greenpeace needs to lead the way on carbon emissions while at the same time finding more flexible and local maritime resources to allow us to take the fight to remote places few can go.”

Greenpeace’s rainbow connection to Svalbard and other destinations for high-profile (and frequently controversial) voyages will continue with vessels such as the Arctic Sunrise, which also has many colorful years of controversial quests.

The Esperanza’s rainbow of Svalbard tales are tinged with hues of inspiration, humiliation, triumph, mockery, jubilation and anger. Those aboard have engaged lawbreakers (or at least those so accused) and broken many laws themselves. They’ve gained global headlines for their efforts to combat climate change and stop Arctic oil drilling, but the coverage often focused on criticism of their ineffectiveness and hypocrisy.

The ship began its life in 1984 as a Russia firefighting vessel known as Echo Fighter before Greenpeace acquired it and put it into service in 2000 (with the crew painting over the Echo’s “h” to give it a new temporary nickname), according to Greenpeace. Thousands of activists in Argentina and other Spanish-speaking countries influenced the organization’s decision to rename the vessel Esperanza, meaning “peace.”

Perhaps its biggest success in Svalbard came in late summer of 2014 when those aboard exposed seismic mapping being conducted in the Barents Sea at the request of the Norwegian Petroleum Directorate. The project that included waters in Svalbard – where oil drilling is illegal, although experts say there’s likely lots of it under the sea bed – was abruptly halted halfway through its planned two-month duration after the media reported Greenpeace’s expose, with the directorate’s official “mission accomplished” explanation believed by pretty much nobody.

But only a few months earlier the oil’s-not-well joke was on Greenpeace when 15 activists aboard the Esperanza boarded a Statoil rig about 175 kilometers from Bjørøya – at the time the world’s northernmost rig – in one of the group’s innumerable efforts to halt all Arctic oil drilling. But while it kept Statoil from being able to move its drilling equipment there for a couple of days until the protesters were removed by police, the company essentially shrugged off the interruption at what was a dry well site as it moved its exploration even further north (a Greenpeace statement celebrated the moral victory that nothing was found at the capped well).

Another success-and-sadness voyage that year occurred when actress Emma Thompson took part in a Svalbard cruise aboard the Esperanza as part of Greenpeace’s “Save the Arctic” campaign. Media coverage of the voyage was massive and largely positive in the sense of reporting her experiences without quoting contrarian sources, but there were nonetheless plenty of skeptics ridiculing the trip by asking how much oil, disposable plastic and other pollution-causing consumables were used by the supposedly climate-concerned celebrities.

Moreover, shortly afterward the Esperanza’s captain was detained and fined 50,000 kroner by Svalbard’s governor  for failing to have a certified pilot aboard during the voyage (and one other within a short time span), the first such violation of Norway’s Compulsory Pilotage Regulations.

More recently the Esperanza achieved one of its most globally notorious – and lengthy – successes in 2019-2020 with a nearly year-long “Pole to Pole” voyage that started in the far north, joining its sister ship Arctic Sunrise in a campaign to promote the United Nations Global Ocean Treaty.

Incidentally, the Arctic Sunrise – a decade older than the Esperanza and in use by Greenpeace four years longer – is the vessel that gained global fame (and infamy), in 2009 when the ship blockaded an 81,000-ton shipment of coal at the Svea pier destined for Portugal. Several people from the vessel also climbed onto cranes at the mine in what was described by officials as the archipelago’s first political protest. The protesters were peacefully removed a day later by police and the Arctic Sunrise departed with no charges or fines imposed – or so it seemed.

In a perhaps not-entire-coincidental twist, the ship was detained in Tromsø by authorities who discovered a large amount of beer aboard not reported to customs. The fine for the violation was 20,000 kroner – the exact amount Svalbard’s governor expected to raise at its annual charity car wash until he and other officials were forced to go to Svea to stop the protest.

(We’ll also note a far more harmonious and attention-getting voyage by the ship occurred in 2016 when it brought Ludovico Einaudi and his grand piano to a Svalbard ice floe for a performance that was viewed by eight million people within two weeks.)

While the Arctic Sunrise will continue showing its colors in Svalbard for the time being, those with Greenpeace are now sharing their fond farewells to the Esperanza by remembering some of its later-in-life successes, including marine discoveries during an Arctic voyage that supposedly has put at least one Big Oil project on hold.

“The Esperanza brought a submarine to the site of Shell’s proposed drilling,” wrote John Hocevar, a marine biologist, in a post on Greenpeace’s website this week. “We found large numbers of soft corals, which did not appear in Shell’s Environmental Impact Assessment. That added to the challenges Shell was already facing, and today the company’s hopes of drilling in the area seem very unlikely to come to pass.” 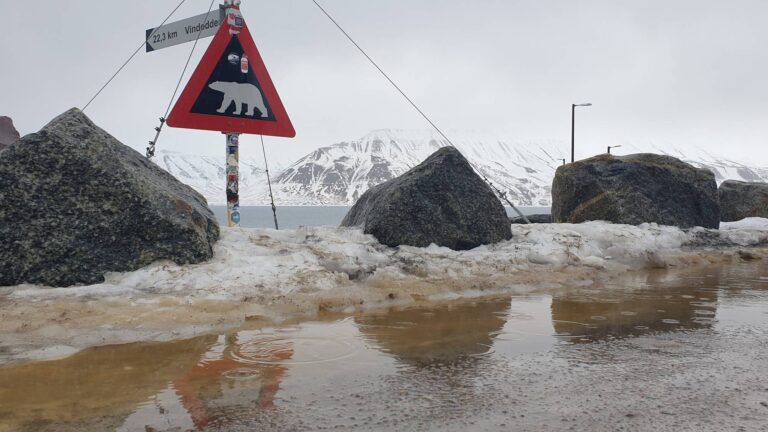 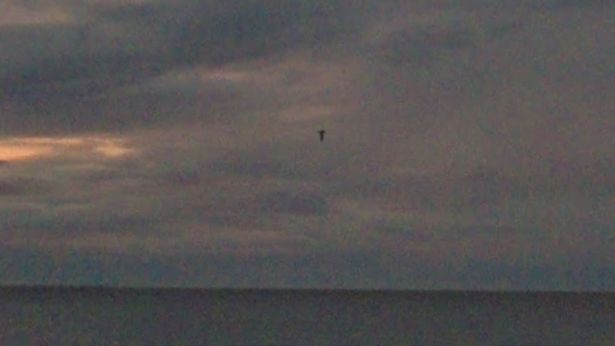 Next post Random weirdness for the week of March 29, 2022: Yet another UFO visits Svalbard, where people and NFTs are fleeing toward to be saved from the sun and pillagers