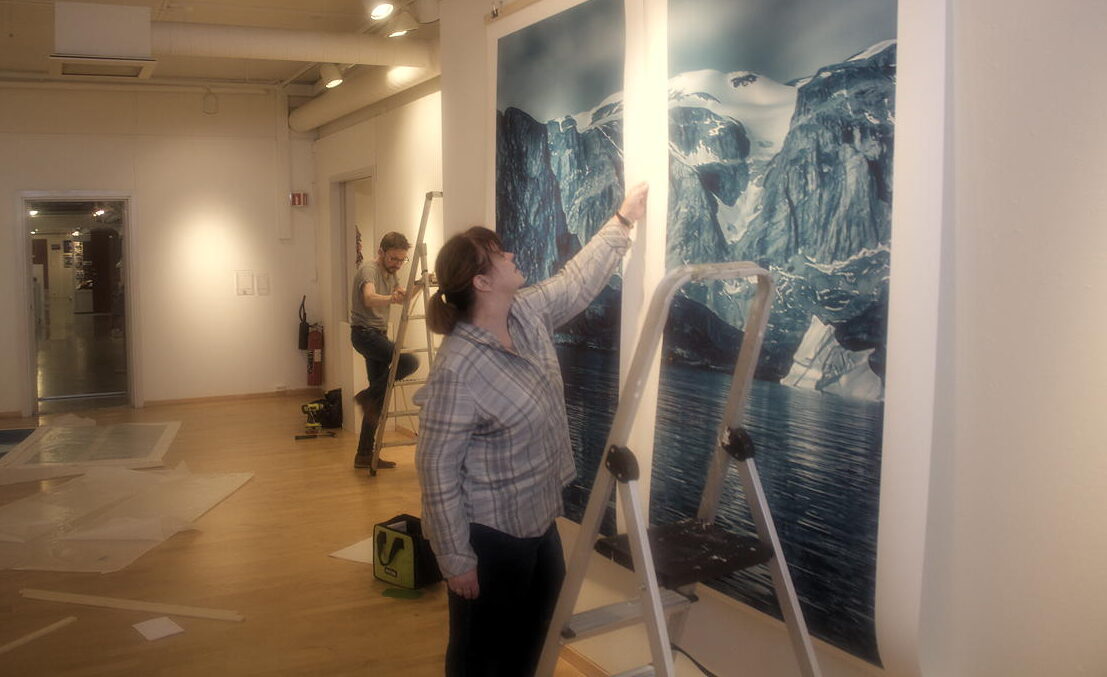 “Running an art gallery in the high Arctic is not a job for most people,” Elizabeth Bourne wrote three years ago in a lengthy feature about Galleri Svalbard when she traveled from her hometown of Seattle to Longyearbyen for the debut of her exhibit at the gallery – or, more precisely, her first exhibit.

She’s had two more since moving to Svalbard a few months after publishing that feature and on Monday she’ll officially preside over the first exhibit as the curator of the gallery building, taking control of from the city which has managed it as a gallery since 1995.

“The intent is to keep the artist residency, the art studios and craft center, and the exhibition spaces open for the benefit of the people in Longyearbyen,” she noted shortly after signing a three-year lease. “We hope to make this a place for locals to enjoy art and craft workshops, exhibitions of both locals and residency artists.”

City leaders closed the building in July after deciding to move Galleri Svalbard – and its vast collection of historic Svalbard works dating back to 1570 – to the upper floor of the renovated Svalbardbutikken building, where other cultural facilities such as the youth center and a movie theater are being housed.

That left Bourne with a very familiar concept – a blank canvas – and she’s opting for a different approach with the building she’s renamed the Spitsbergen Kunstnersenteret/Artists Center. Her predecessor, in the article she wrote during her first visit, talked about needing to balance artists’ needs/desires with those of tourists since the gallery was promoted as a top visitor attraction.

“We have different purposes,” she stated in an online interview this week. “I am not focused on tourists, but on the local community and being a place where they can enjoy coming to. I hope to attract more Norwegian artists to the residency as most visiting artists are European.”

The new focus comes in the wake of 18 months of ailing tourism figures due to the COVID-19 pandemic, but Bourne said that wasn’t the reason for her new focus.

“While I think that it’s wise not to be dependent on tourism in these uncertain times, this is by choice,” she said. “I would like this to be a special place for people who live here. Everyone is welcome, but my goal is building community.”

The gallery building features a variety of rooms and amenities, which in their Galleri Svalbard days included spaces for permanent exhibits (including one where music performances often took place), a large room dedicated to temporary exhibits, a small theater, a long section lined with small artists’ studios along both sides (and a communal/kitchen between them), an upstairs “artists center” with additional studios, and an upstairs residency space with full living facilities including three bedrooms (where Bourne lived while visiting for her first exhibition).

Bourne, who has spent the past couple of months clearing out and renovating the building, said many of the areas will be used similarly as before.

“Nothing is happening with the artist work studios,” she said. “Everyone who is there remains there. No change to their rent. I expect to have four or five additional studios for rent.”

The artists center will also continue to host events, workshops, residency programs and exhibits. The first event will be the official opening of this year’s Arctic Action festival starting at 6 p.m. Monday, featuring performances and discussions by the four international artists scheduled to be featured at the 7th annual festival that lasts until Oct. 19. While most events take place outdoors, “this year we will have an indoor base, an indoor performing space, and a place to meet locals and discuss art and its importance in todays society,” the festival’s website notes.

Bourne, who spent years visiting Arctic areas for her photos and paintings before moving to Svalbard, quickly established a local and social media presence in Longyearbyen. Two more of her collections were featured at the gallery, and she won numerous awards and exhibition placements for her mostly Arctic works that tend to be heavy on bluish hues and icy landscapes.

She became one of the very few people in Svalbard to earn a living independently through sales of her paintings, calendars and other works. But when the city announced plans to close Galleri Svalbard and offer the space to bidders she was among a very few who expressed serious interest.

But in addition to questions about whether to try luring tourists to the building about three kilometers from the center of town, there’s also issues posed by the ageing building itself. When Bourne interviewed her predecessor, Jan Martin Berg, he said the gallery director’s job included a lot of tasks not typically included in such titles elsewhere.

“When I was writing my master’s (thesis) in art history, I never imagined my workday would include sporting full snowmobile attire as I lay on my back in the snow using a blow dryer to unfreeze the bathroom plumbing,” he said. “This job comes with challenges. The building is old and needs maintenance.”

Bourne said that while she is doing extensive renovations to the space, the kind of work Berg described isn’t part of her workload.

“I have a good relationship with (the city) and they have been supportive about this venture,” she said. “I cannot possibly fix a broken pipe or repair the heating system. That has to be done by someone who knows the system.”

The work needed on the ageing building is part of the reason the new artists center at present doesn’t hold promise as a long-term project. Another major concern is the future of Nybyen is in question due to increasing threats to many of the structures there from avalanches and landslides, which has resulted in numerous evacuations in recent years including one of most structures that lasted most of this spring. While the artists center is outside the highest-risk range, city officials are expressing reluctance about investing in the building given that most other structures may be declared uninhabitable.

Bourne said plenty of work remains to be done before her vision of the new center is completed.

“In January when all the work is done, we will have a party,” she announced on Facebook.