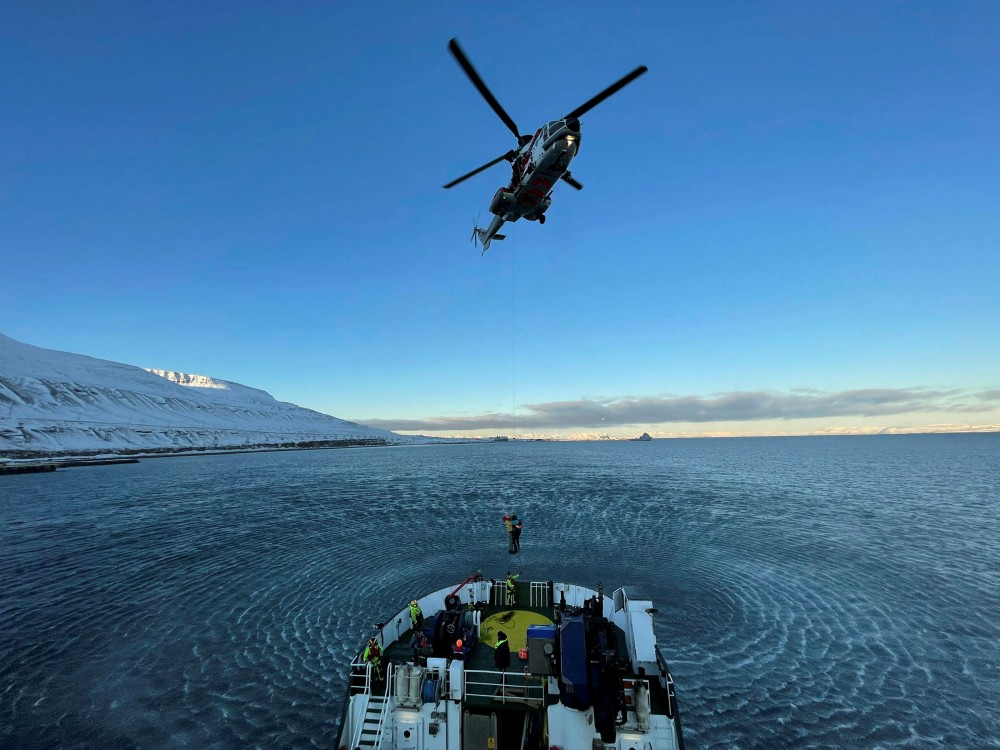 Simulated News Service – At least four people were killed and dozens injured by a fire aboard a cruise ship about 60 kilometers northwest of Longyearbyen on Friday morning, triggering a massive rescue operation to airlift the roughly 200 people aboard by helicopter to temporary emergency facilities hastily built in -10C conditions on a nearby snow-covered shore.

Officials said favorable conditions prevented a worse disaster due to shortcomings exposed during the remote Arctic rescue, which “would not have gone well” if a larger ship with thousands of passengers was involved…

Such was “reality” for about 500 rescuers, volunteers role-playing as victims and others participating in a day-long exercise to test and evaluate Svalbard’s emergency preparedness for a scenario officials see as increasingly likely as ship traffic to the archipelago continues to increase over the long term. While numerous upgrades in equipment and technology have occurred in recent years, as with other large-scale drills deficiencies continue to be revealed.

“The ship today had only 200 passengers, which we see is manageable,” Svalbard Gov. Lars Fause told TV2. “It would be a very difficult situation on board a larger vessel. If it had been a cruise with several thousand passengers we already know how it will go if there is a serious fire on board. It would not go well.”

“But no matter how we practice it will not be like another real crisis. Today the weather was very good (and) at the same time as we were not exposed to the enormous information needs the mainland would have had. In any case, we are far wiser tonight than we were this morning.”

That, for better and worse, is essentially the same assessment resulting from a series of annual exercises dating back several years that have included scenarios such as oil spills as well as passenger rescues. The governor’s rescue capabilities have been upgraded during that timespan with a new service vessel designed for Arctic operations and two Super Puma rescue helicopters with greater capacity/capability compared to previous aircraft, but some inadequacies are seen as inevitable even with new technologies becoming available for all rescue agencies.

“We will never be able to have a 100 percent rescue preparedness around Svalbard,” said Bent-Ove Jamtli, director of the Joint Rescue Coordination Centre of North Norway, following a simulated cruise ship rescue in 2019. He said at the time cruise operators should carry life-saving equipment for mass evacuation in cold climates (new polar code are already requiring better standards for lifeboats, rafts, and “surveillance suits” to protect and help locate passengers and crew).

The “alarm” for Friday’s exercise, the second-largest ever next to one in 2014, occurred at about 9 a.m. when the governor’s office was alerted to the fire that immediately killed four people aboard the ship 60 kilometers from Svalbard, although the ship was actually much closer to town to make it easier for the passengers to be removed by helicopter. Besides the governor, participants included the Norwegian Coast Guard, Joint Rescue Coordination Centre of North Norway, Lufttransport, Barentswatch, The University Centre in Svalbard, Norwegian Air Force’s 330 Squadron (rescue helicopters), drone operators with UAS Norway, local authorities and Longyearbyen Red Cross.

Dina Brode-Roger, a Longyearbyen resident who volunteered to be a victim for the exercise, said in an online interview they were briefed on the roles they would play during a briefing the previous evening before meeting at Longyearbyen Harbor starting at 7:30 a.m Friday so they could be brought by zodiac to the Coast Guard vessel serving as the “cruise ship” they’d be rescued from.

“We were hoisted up 2 x 2 (super efficient, non-verbal explanations, since helicopters make a lot of noise),” she wrote. “From there, flown to Revneset where the Red Cross had already set up four yellow tents to sort people. We were given arm bands according to degree of injury and assigned to a sorting tent.”

Brode-Roger, a “lucky” victim in the minor/no injury category, said she was then transported to Svalbard Airport around 1:15 p.m. “where we were then once again checked for injuries and sent to Svalbardhallen where we were registered and then offered soup, coffee, showers, emotional and psychological support. In the ‘play’ scenario, I was able to ask for and get info about a friend who had been taken to the hospital. The exercise was over at around 5:30 p.m. with a debrief at 6 p.m. at UNIS.”

Her assessment was much the same as the governor’s and from previous exercises.

“I felt it went very well and Longyearbyen would be able to respond – of course we were 200 and if it was 2,000 that would be another question,” Brode-Roger wrote. “One helicopter came up from Tromsø; that took time (as did prepping the helicopter here for rescue, removing seats, etc.) and it would in real life, too. I think they are ready to respond, but we have limited infrastructure for a huge event (mass tourism kind of thing). Boats with thousands of people to deal with in trouble would be a whole different scenario.”

The persistent difficulties likely to be encountered in a large-scale rescue were revealed in the governor’s official assessment of the area’s largest exercise in 2014. It found Svalbard generally has well-trained emergency rescue and medical personnel, but their relatively low number and lack of equipment is a significant vulnerability if a large-scale disaster occurs.

“(The passengers) are therefore at the mercy of getting quick and comprehensive medical professional assistance from the mainland,” the report states. The evaluation also criticized official responses to media inquires, noting that while the initial stages of a crisis are are often chaotic, there was a “strikingly poor ability to confer the status of health status on the second day of the exercise.”

Many of the same emergency agencies, as well as rescuers working for the Russian state-owned company Trust Arktigugol, participated in yet another large-scale exercise this week in Barentsburg. The purpose of the exercise on Tuesday and Wednesday was to test “cooperation between state resources and private resources established in the archipelago” in responding to a large oil spill at sea, according to a statement by the Norwegian Coastal Administration.

“We are particularly pleased with the interaction between our own task force and other resources, both on land and on board several vessels,” said Trond Hjort-Larsen, leader of the exercise for the Norwegian Coastal Administration. “A joint exercise like this provides valuable experience to take with you into a real event.”