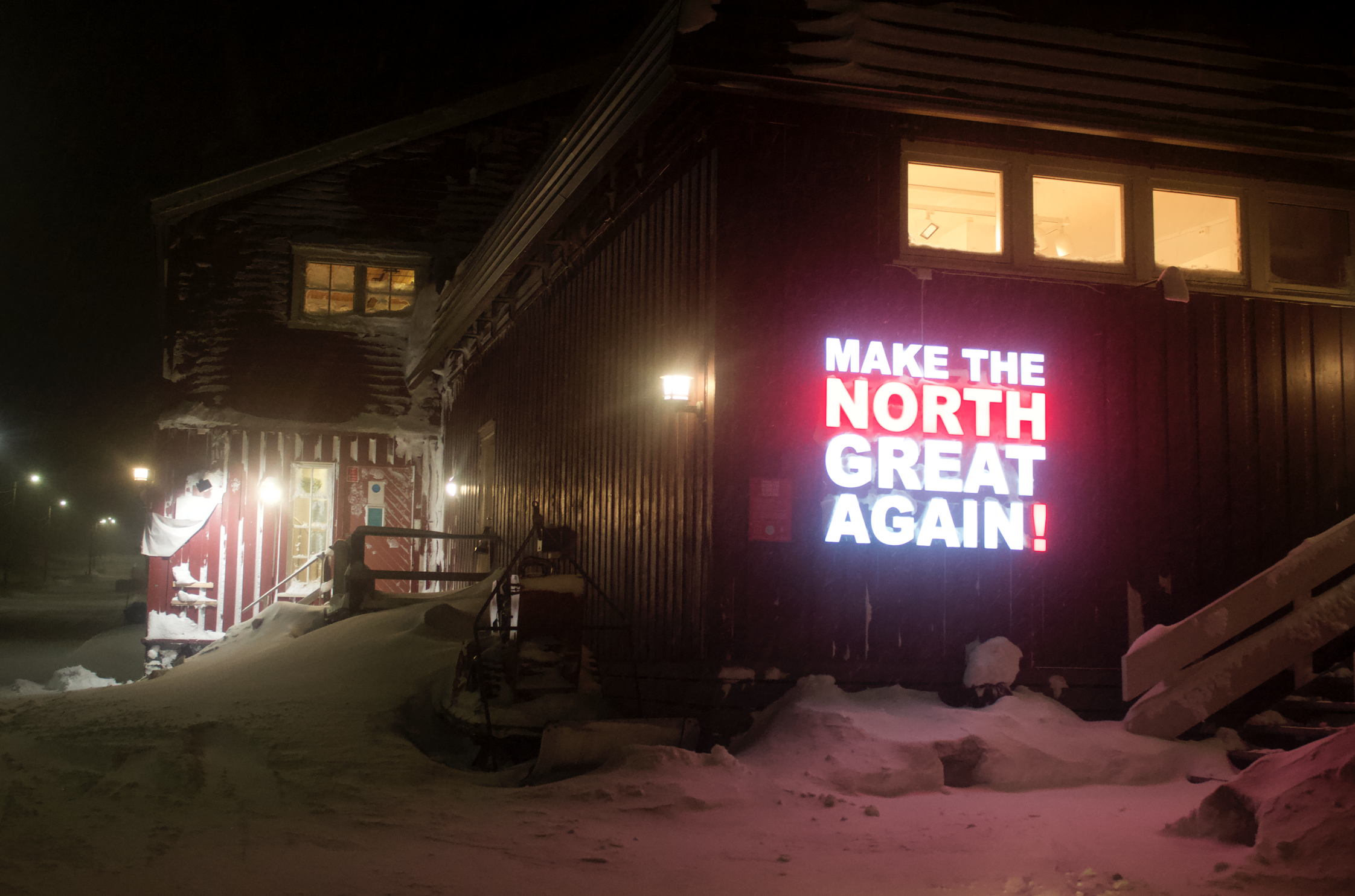 During one of the darkest days in the history of the United States, a shining light on a hill invoking President Donald Trump’s aura continued illuminating the polar night in Longyearbyen.

And like the man blamed for the mob that stormed the U.S. Capitol, opinions about the neon sign that is already a decisive loser in the popular vote among locals got a lot darker in the wake of the wreckage.

Two of the signs, one at Galleri Svalbard and the other next to The University Centre in Svalbard, were illuminated in November as part of a project by the socio-political group Nordting. Created by Amund Sjølie Sveen and promoted by the gallery in association with The Northern Norwegian Museum of Art, the stated intent was to use the “well-known election campaign slogan to turn the balance of power upside down” in a way to bolster tourism in northern Norway.

Longyearbyen residents, albeit a decided minority of those offering opinions, said during the unveiling the controversial and obvious association with Trump made the sign and project a worthwhile artistic endeavor. Like the rest of the world, many locals watched the riots at the U.S. Capitol overnight Wednesday and shared thoughts mostly expressing dismay and disbelief on social media.

While some residents are still supportive about the signs and project– or “meh” about associating them with Trump and the riots – the denunciations of it are being expressed in stronger terms.

“We saw yesterday in Washington that words have physical consequences,” wrote Dirk Rasmussen, who splits his time as an expedition guide between Longyearbyen and his hometown of Leadville in the U.S. state of Colorado, responding a question about the sign posted by Icepeople on a Longyearbyen community Facebook page.

“While the spirit of this Nordting and Nordnorsk Kunstmuseum collaboration was well intentioned and rooted in promoting discourse surrounding the Arctic, the geopolitical context has has fundamentally shifted,” he wrote. “Like it or not, the words ‘Make […] Great Again’ have been wholesale co-opted. Riding the coattails of extremists, insurrectionists and white supremacists that promotes extreme nationalism is unsophisticated and ugly business.”

Among those expressing no problems with the sign is Jamal Qureshi, who moved from New York several years ago to start a premium bottled water business  in Longyearbyen.

“I still think it’s just funny and nothing to get so worked up about,” he wrote. “Unless we have a right-wing militia starting training sessions up here?”

There was, not surprisingly, also some heated pro/anti-Trump exchanges.

“As an American this represents all of the hate and divisiveness created by the MAGA movement and has no place in Svalbard,” wrote Josh Wing, a chef who moved to Longyearbyen from Montana.

“Typical tolerance of leftist,” wrote Adam Andrews, an Oslo resident, in response to a critical comment that included a “middle finger” emoji. After a subsequent exchange of a couple of dozen comments he added “those who accepts the sign do it either because they support DT or they do it because it’s FUNNY. I like the sign because it’s funny.”

While sign by the gallery is still shining, the one by UNIS has been dark in recent weeks, due to at least one vandalism incident and some technical malfunction. Sveen, in an online interview, stated he believes the current outage is due to technical problems.

“The electricians have been busy/on holiday and the weather isn’t all that good for lifts and outdoor work at the moment, so we’ll have to wait over the weekend to have it up and running again,” he wrote.

The signs are scheduled to be displayed until March.

Sveen stated he doesn’t think Wednesday’s riots are surprising “for anyone who’s been paying attention for the last four years” and they underscore how “artworks dealing with day-to-day political reality are of course unpredictable because the context will never remain unchanged.”

“That is part of the joy and the challenge; things change, our perception of things change, the sign makes us think of things today that we didn’t think of yesterday,” he wrote. “And in a couple of weeks, we’ll think of something else.”

Do the riots make the signs “more evil,” as Sveen put it rhetorically?

“Should we fear that the local citizens of Svalbard will be inspired and take the sign as a call to dress up in reindeer antlers, march to the Sysselmannen’s office and seize power over the North?” he wrote. “And if that happens, would it be a failure or a grand success?”

Jan Martin Berg, manager of Galleri Svalbard, wrote in an online interview “this is not a question anyone should try to answer with easy flippantness.”

“No utterance, artistic, political or otherwise, stands alone, nor can it pretend to rise above its contemporary or historical context,” he wrote. “It’s a bit like lifting something caught in a fishing net – or a sticky cobweb, if you like. The surroundings tend to weigh them down or want to follow upwards.”

“For example, the age old swastika originally was considered a symbol of luck and tends to exist in several cultures worldwide where they worshipped the sun. Today, at least in a Western context, it will always remind us of the atrocities of WW2 and using it for other purposes today is virtually unthinkable.”

Berg stated the slogan might be an example of someone “taking derogatory terms used about them and using them with pride – a form of positive cultural appropriation, if you like,” as has happened with some terms meant to be derogatory to homosexuals.

“I believe it will in time become clear that behind the veils of populism on the surface of Nordting, there is a deep concern for the North, and a sincere wish to debate the structures of power that influences life in the North,” he wrote. “And appropriation of a slogan invented for more ‘sinister’ purposes may actually prove to be a good thing.”

One thought on “TURN OFF THE DARK? Opinions about controversial neon ‘Make The North Great Again’ signs in Longyearbyen get more incandescent following Trump-fueled riots at U.S. Capitol” 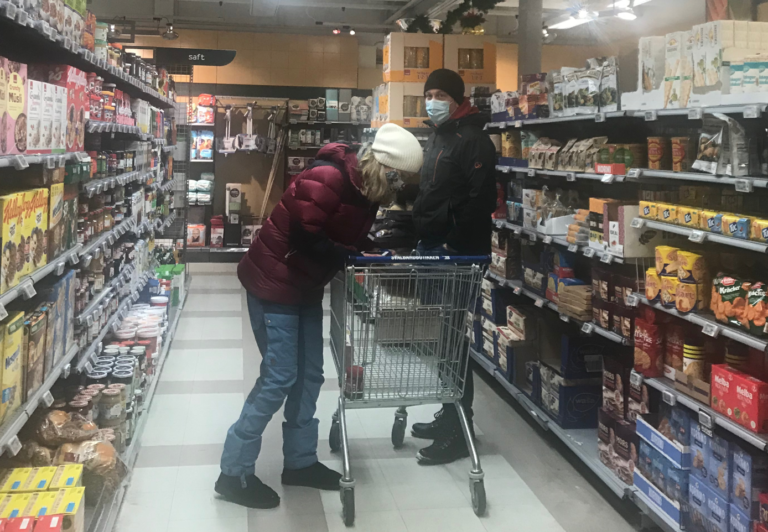 Previous post MASK MOVEMENT: Longyearbyen residents, many of them maskless during much of the COVID-19 pandemic, now covering up due to warnings and returning travellers 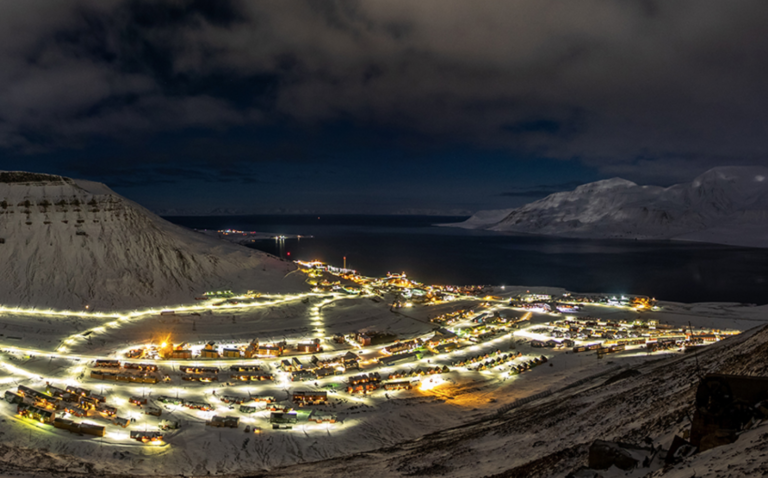 Next post TOURISTS QUARANTINED AT HOTEL: Visitors were in contact with COVID-19-infected person on mainland; all have tested negative and are asymptomatic so far