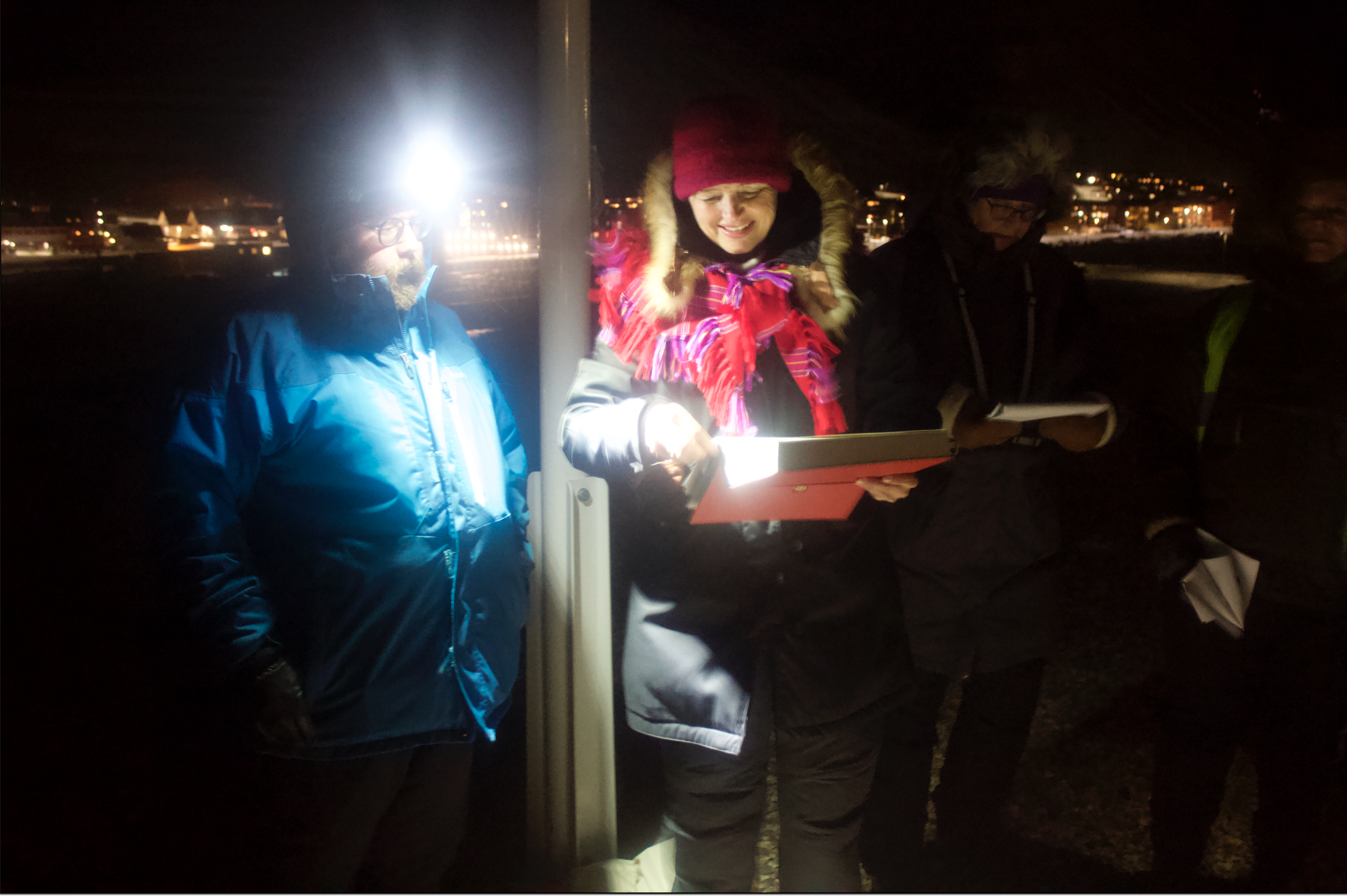 A VERY SPECIAL COVID CHRISTMAS IN SVALBARD: Outdoor Mass w/ 10 residents reading/singing in their native languages and a Christmas Eve harkening back to old times set the spirit

While a chill has been put on many Christmas celebrations worldwide due to the COVID-19 pandemic, in the world’s northernmost town Priest Siv Limstrand found warmth in venturing outside her closed church and inspiring her world of congregants to speak and sing in tongues.

Limstrand, priest at Svalbard Church since 2018, found herself in the literal cold due largely to a large-scale renovation of Svalbard Church, although strict COVID-19 regulations complicated using an alternate indoor facility. Instead, she came up with a first-time-ever concept so remarkably “Svalbard” it’s something of a holiday miracle it took a pandemic for it to occur.

Ten local residents were chosen from among the more than 50 nationalities residing in Svalbard to sing “Silent Night” and read the “Word Became Flesh” passage from The Book of John in the languages of their native country at noon at the hilltop Skjæringa memorial overlooking town. Among the reasons the site was chosen is a bell placed at the memorial when the church was built during the 1950s was traditionally used for the ringe jul (call to Christmas), which Limstrand rang as the gathering started.

The “Silent Night” lyrics were printed in each language for those spirited enough to sing “in tongues” phonetically.

Limstrand said the gathering was inspired partially out of necessity due to the church closure. But there was also a heartfelt desire for a Christmas celebration cherishing the international diversity that makes the unique small Arctic island community even more one-of-a-kind.

“The idea was to invite ten people to read here,” she said. Attempting to do more – let alone aspiring to an all-inclusive offering from representatives of all the countries with residents in Svalbard – would have meant shorter readings and moving indoors – especially with near-gale winds and a temperature of 1ºC.

The nationalities selected by Limstrand included some intriguing omissions and inclusions. Russia, the largest non-Norwegian presence in Svalbard was absent (a planned reading in Ukrainian, representing who the Russians largely hire these days, had to be nixed). There also weren’t any readings in languages from Norway’s Scandinavian neighbors (most notably Sweden, one of Longyearbyen’s largest groups of foreigners), but a different neighbor was present with a reading in Southern Sami.

“There actually quite a number of people here with Sámi roots, some of them also present on Christmas Eve in their traditional costumes,” Limstrand explained. “Jovna, our church musician, is a Southern Sámi himself, so it was natural to ask him to read in his mother tongue.”

“We were working on this the last few days and we couldn’t go into long deliberations as to what languages would be more important,” Limstrand noted. “But we contacted people we knew were here for Christmas. Next year we’ll have these experiences in mind and I’m sure the diversity will be even broader.”

The gathering ended with everyone reciting The Lord’s Prayer simultaneously in their native tongue.

A warmer and better-sounding gathering occurred the day before during an indoor Christmas Eve Mass.

Limstrand’s sermon (in a room lit only by candles during those minutes) about the millennia-old message of bringing a light to the darkness and a new spirit of hope was remarkably here-and-today. So was the fact that due to virus restrictions. she had to deliver it thrice instead of the usual twice.

The setting also harkened back to old tradition since this year’s Mass took place in the theater at Huset which, besides being the gathering point for other community activities, was Longyearbyen’s place of worship until Svalbard Church was consecrated in 1958. The current construction at Svalbard Church meant moving the Mass and, while in theory the theater has more seats, only 150 people were allowed in at a time due to COVID-19 restrictions.

That meant a Mass marathon for Limstrand, with an extra service at noon in addition to the traditional afternoon services at 2 and 4 p.m. She said about 60 people attended the noon service, making the larger crowds for the subsequent Masses more manageable.

“We had about the same number of people who would have had for two services at the church,” she said.

On another old-time note, the music was performed on the old organ long used at Svalbard Church which, after being replaced and moved to the mainland, was donated to Huset when it was brought back for a special concert by the Longyearbyen Mixed Choir.

“(That was) something I was really happy to hear,” said Anne Lise Klungseth Sandvik, a resident of Longyearbyen for more than 45 years who was the “greeter” at the Mass (which included handing out numbered “capacity” tickets along with the worship programs) and leader of numerous musical projects including the choir concert.

But in a contrary element of audio/video fellowship that has become a “tradition” the past few years, the 4 p.m. service was livestreamed  to the Troll Station operated by Norway in Antarctica via a two-way connection set up by a Norwegian Polar Institute leader living in Longyearbyen.

The bottles of hand santizer didn’t outnumber the candles, but they’d have consumed a largely slice of a pie chart comparing their numbers. And while the Polargospel children’s choir sang songs familiar to anyone here in past years, other traditions such as Limstrand wishing each of the congregants a Merry Christmas as they departed after the Mass instead was another departed in itself.

Limstrand, incidentally, opted to skip the usual visit to a communal Christmas Eve feast at one of Longyearbyen’s hotels after the extra-long , since breaking bread with others for the occasion also typically involves yet more sharing of spiritual nourishment as well.

“I’m going to have a quiet evening at home alone,” she said.

She and other church members, along with The Governor of Svalbard, will resume their holiday mission on Dec. 26 with a helicopter visit to Ny-Ålesund to deliver a Mass and share a holiday meal. Such visits to all of Svalbard’s settlements occur during the holiday weeks and will conclude in Barentsburg on Jan. 7, the date the Russian Orthodox Church celebrates Christmas.