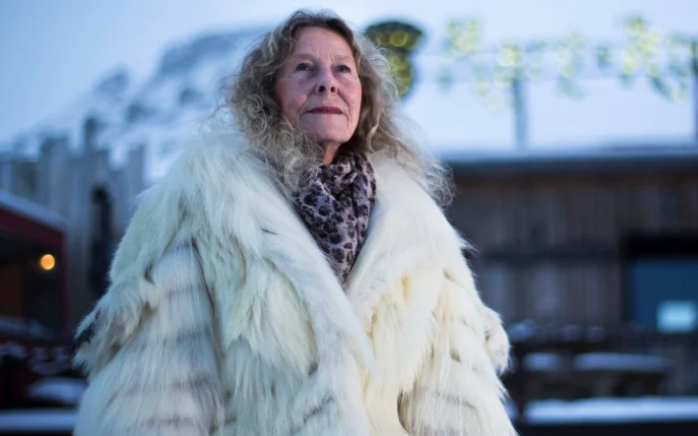 ‘WHAT AN ADVENTURE OF A LADY’: Mary-Ann Dahle, legendary owner of Longyearbyen’s most eclectic lodge (and coat) dies

Mary-Ann Dahle was a dear. And a fox. And a bear. And she kept the penis bones of the aforementioned Svalbard animals and more in a glass case at her bar to place as swizzle sticks in customers’ drinks.

Dahle, 72, died Saturday after a long battle with cancer. She was as well-known for her range of always-intriguing personas as her rustic lodge that attracted famous and adventuresome threadbare alike – and of course her long polar bear coat with the head still attached (“the national coat of Svalbard…it’s very heavy”).

“Today we say goodbye to the one of the strongest woman we’ve all ever known – Mary-Ann,” her family and colleagues wrote in memorandum on her Facebook page. “The woman who had indescribable energy and power to create her own world around, stay positive and able to get through any difficulties she would face on her way.”

A candle and memorial will be outside the lodge’s Vinterhagen restaurant starting at 4 p.m. Sunday for those wishing to pay their respects.

Dahle, whose mainland hometown is Lenvik, moved to Longyearbyen in 1997 and the one-time cleaning lady (who continued to do the “dirty work” as a boss) bought the former miners’ barracks that she transformed into Mary-Ann’s Polarrigg in 1999.

“At first they said that I should not go up to the icy wasteland there,” she told Svalbardposten in a profile feature in 2015 (English version). “But a year after I was there. That was in 1997, and I was only going to be a short time and saving up the money.”

But converting the ageing and somewhat oddly connected structures into what eventually did indeed become one of Longyearbyen’s most-profitable lodges definitely wasn’t a short-term effort, especially at first.

“These were dilapidated barracks and everyone thought I was crazy,” she told ABC Nyhteter in 2016. “Every time a guest opened a window I had to go out with the hammer to repair it.”

In additional to numerous polar bear “furnishings” such as heads on walls and pelts on floors of the lodge are other various other touches such as accessories from old coal mines and a red miners’ bus in the parking lot outside that serves as a smoking shelter. (She also harbored longshot hopes of turning the parking lot into a “soundstage” she she could lure musical “idle” Bruce Springsteen to Longyearbyen to perform a concert which, of course, never happened.)

In addition to the “definitely Svalbard” drinks at what translates in English to her “Penis Pub,” the restaurant’s menu Dahle mostly cooked herself for years is the closest thing one might find to traditional trapper’s/hunter’s fare with whale, seal, reindeer and more served as steaks rather than the pate/smoked/sausage/burger and other “consumer-friendly” forms commonly seen elsewhere.

“They love it. It’s very pure,”she told the Sydney Morning Herald in 2016 during one of her countless international media interviews. “I think this whole year I have had three or four persons who didn’t like it because they thought about what they were eating. It’s very important not to fry it too much because then it tastes like leather and it’s no good. Seal and whale you can eat raw; you don’t even have to fry it. When you fry it you have to be very careful.”

As for those (in)famous swizzle sticks?

“When nice ladies come and sit in the bar and they come to be a bit pissed I put these in their drink,” she told the Australian paper with a laugh. While she has most native Svalbard animals with sufficient schlong to swizzle “reindeer, they haven’t bone in the penis so I asked (a friend), ‘Can you dry one reindeer penis for me?’ He was laughing.”

But the restaurant’s setting – true to its name that in English translates to “winter garden” – is anything but traditional due to its lush greenery and greenhouse-style windows along most of the dining area – entered through a replica mine shaft and featuring yet more trophy-room items on the walls.

The 73 beds are divided into rooms as diverse as everything else inside and out – 17 singles, 20 doubles, four family rooms, a suite, and one- and two-bedroom apartments. There’s also a sauna and massage facilities.

The Telegraph of London, in a 2011 review, scored it a 9/10 for style/character (“eccentric Arctic hunting lodge”), 8/10 for service (“informal and helpful,” singling Dahle out for her personal attention) and the rooms 6/!0 (“small and simply furnished”…although the headline assures they are “perfect for Arctic nights”).

The mixes scores, as with everything about Dahle, ranged all over the map during her years in charge, but generally reflected the luxury/service vs. historic/authentic expectations of arriving travellers. But the generally high scores from professional reviewers were consistent, including a “restaurant of the month” feature in June of 2018 by Scan magazine.

“What began as a cluster of shacks, once used as housing for construction workers and miners, has grown into a grand accommodation and restaurant hub that reflects the local history and atmosphere” the article states.

While Dahle claimed to work 16-hour days for months on end without a day off – and her family/friends expressed concern about her long hours – she also had plenty of away-from-home Svalbard adventure stories to share.

“I went out on the ice when it was -50C once and the cold got into my eyes and I had problems for two years,” she told The Guardian in a 2010 interview. “We don’t have problems with the cold; the tourists do. (But) -10C? That’s not cold at all.”

Dahle was introduced to worldwide TV audiences when she was one of ten residents followed for eight months for the BBC reality series “Ice Town – Life on the Edge” (liveblogs by Icepeople of all ten episodes, including a couple while watching with her and others in the bar).

She moved to the mainland and turned over operations of the lodge to her daughter, Iris Dahle Bjørkmann, after being diagnosed with cancer a few years ago. Although she spent months receiving treatment she emerged during the final years of her life in photos showing her enjoying everything from travels to knitting at home last Christmas.

Her daughter, in an tribute posted the day after Dahle’s death, expressed love for “letting me walk in your shoes for a while” and appreciation in that “your driving force is absolutely unique…and it also demanded to sacrifice a lot.” But now, as Bjørkmann and those at the Polarrigg experience what might their biggest crisis ever due to the coronavirus pandemic that has brought Longyearbyen’s tourism industry to a total halt expected to last for many months, Dahle’s memories are offering both those at those lodge and those who would be guests inspiration and hope for the future.

“Yesterday we experienced having more bookings than cancellations,” Bjørkmann wrote. “We wonder if you had a finger in the game there. And when I read all the greetings from previous guests and guests who had to cancel due to the corona, I’m convinced that we have a future here. They are coming back.”

This story will be updated throughout the weekend.