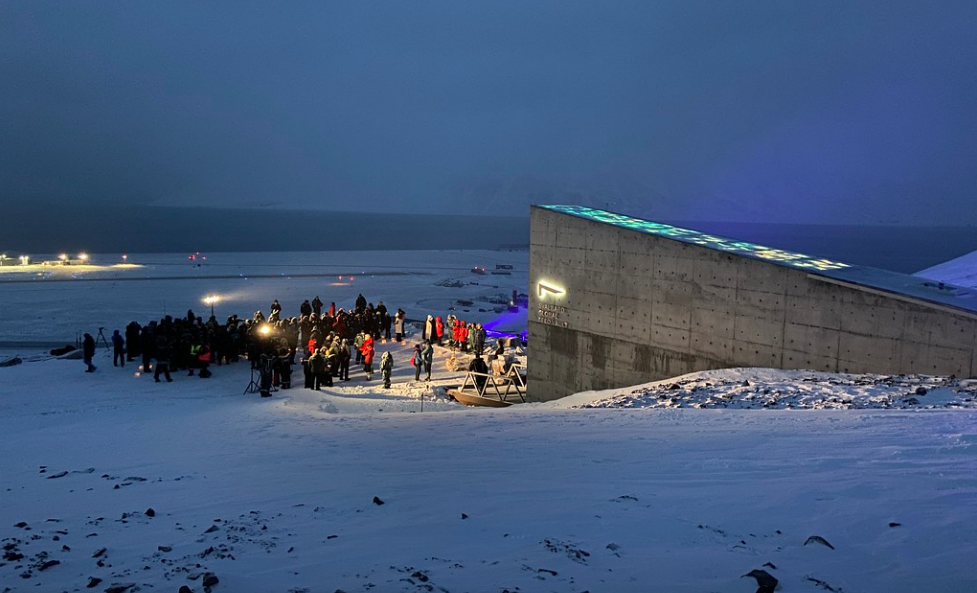 The Svalbard Global Seed Vault celebrated a huge repair job with a huge deposit of seeds on its 12th birthday Tuesday, as representatives from 36 genebanks on all seven continents and world leaders gathered at the so-called “ultimate failsafe” facility for a ceremony that resulting in the total collection surpassing one million seed samples.

As with many things involving the vault, it was a bipolar event as drastic hopes and concerns were raised about growing threats to the world’s food supplies, the vault’s role in potentially helping address them, the paradox of storing crops threatened by climate change in the place where change is happening faster than anywhere on Earth, and newly raised controversies about Norway’s sovereignty over Svalbard at time when the archipelago is considered one of the country’s top national security risks.

Clustered around the vault’s rebuilt entrance in the steadily increasing darkness and snowfall of late afternoon, depositors carried boxes from a nearby truck to the door of the access tunnel as their names were called out. Dozens of media cameras captured every moment as the depositors then received handshakes and framed ceremonial certificates from Norwegian Prime Minister Erna Solberg, all to a low-volume crooning hum by the Store Norske Men’s Chior standing to the side of the entrance.

“The collaborative effort that is being shown here I think is also a very good example to all of us about how we can tackle our common problems across the globe,” said Ghana President Nana Akufo-Addo, co-host of the event along with Solberg.

Solberg, in an interview after the ceremony, emphasized a message repeated by many other attendees that while the vault fulfils a vital role on safeguarding food sources against catastrophic situations, it cannot be the only emergency backup resource.

“First of all, I think we should have multiple vaults like this,” she said. “We should have vaults all around the world. Different countries should take responsibility for making sure they have gene banks. I don’t think we should just have one sole one, but this is the copy. This is the place you can leave a copy that is outside your territory, and make sure that if something happens in your territory and you need to get back your grain it’s here.”

Acclaim for the seed vault includes its ranking 10th on a list of the 50 most influential projects of the past 50 years, as judged last year by the Project Management Institute. But the vault has also been fertile ground for skepticism since its inception from voices ranging from scholarly to far-fetched conspiracy theorists, and comments posted on mainstream media coverage of Tuesday’s event suggests there’s an abundance of naysayers unlikely to be swayed by the striking images or arguments raised by experts.

The 60,000 crop varieties deposited in about 170 boxes Tuesday include wild emmer wheat from Israel, potato varieties from Peru, onions from Brazil, guar beans from central Asia, and wildflowers from a meadow at Prince Charles’s home in the UK, candy roaster squash from the Cherokee Nation in the United States and many others. The vault now contains about 1.05 million seed samples being stored at minus 18 degrees Celsius, with a total capacity in its three storage rooms of 4.5 million.

The deposit and three days of gatherings as part of a “seed summit” strived to highlight progress and goals in addressing global food security under threat from vast changes in climate, political and economical instability. But it also called attention to the controversies of the “Dooomsday Vault” itself, since the deposit was the first major event after design flaws exposed by climate change resulted in a complete rebuilding of the entrance portion and tunnel that cost about 20 million Euro, more than twice as much as the original nine-million-Euro cost of the facility.

The flaws were caused by permafrost failing to refreeze due to warmer than predicted temperatures, resulting in water seepage into the entrance tunnel due to inadequate hillside draining and sealing of the vault’s entranced door. While numerous media articles declared the “Doomsday Vault” was itself doomed due to “flooding,” the seepage never came near or was a threat to the seed storage rooms 130 meters inside the mountain.

The upgrades included drainage ditches around the entrance, a new administrative building near the entrance to control certain automated functions and host visitors, thus reducing their access/time in the vault itself, and moving a power transformer that shorted out due to leakage from inside the vault. The tunnel itself was also rebuilt to protect from leakage.

“In February of 2018 the Norwegian government launched a 20-million-Euro euro project to create a new waterproof tunnel for the vault,” Norwegian Minister of Agriculture and Food Olaug Bollestad told media and other visitors during a brief tour extending about 20 meters inside the entrance before the deposit ceremony. “This is the new tunnel. Waterproof.”

The leakage is among the numerous sensationalized articles about the vault since its opening, triggered in large part to the “doomsday” nickname generally disliked by experts affiliated with the facility.

“The seed vault is not about the world ending,” said Hannes Dempewolf, senior scientist and head of global initiatives for the Global Crop Diversity Trust, the vault’s administrators. “It is not about the apocalypse. It is about the very real challenges gene banks are facing.”

Those challenges were highlighted in 2015 when the first withdrawal from the vault occurred to help replace seeds lost when a major seed bank in Aleppo was destroyed during the Syrian civil war. But experts at Tuesday’s summit said there is a vast range of other critical problems affecting all countries regardless of their economic, political and/environmental security.

Simran Sethi, an ecological sustainability journalist who was the summit’s keynote speaker, said there has been a drastic decline in the variety of foods grown and consumed globally, noting the United States has lost more than 90 percent of its fruit and crop varieties since 1900. She said Svalbard’s seed vault is a vital resource – but not the only one – for preserving future crops and reducing global hunger in the wake of climate change since “we cannot put all of our eggs in one basket.”

“In this ice desert of Svalbard, 800 miles from the North Pole, the seeds are frozen, safe and stable – but not evolving,” she said. “That’s why also need seeds preserved on farms.”

Svalbard was deemed an ideal location for a “failsafe” seed facility not just due to its remoteness and cold seed-preserving climate, but because of its presumed political security due to factors such as the international spirit of access and cooperation conveyed by the Svalbard Treaty, which reached its 100-year anniversary on Feb. 9. But that presumption is under attack as Russia is using the treaty’s anniversary to challenge Norway’s interpretation of its authority in the archipelago, and similar concerns have been raised in recent years by the European Union and other entities.

Furthermore, Svalbard has for years been officially classified as one of Norway’s top national security risks due to the ease of international access and vulnerability of critical infrastructure such as digital communications with the outside world. Russia has also conducted multiple full-scale simulated military invasions of Svalbard in recent years and the Norwegian government has issued reports declaring its military and allies are ill-suited in the event of such an attack.

Solberg, in her interview Tuesday, said she doesn’t believe the current-day treaty, security and sovereignty issues will affect the seed vault’s role or safety in the wake of local and global disruptions during the near and distant future.

“That is something different than having the authority and responsiblity over this territory,” she said. “And of course it will not affect the vault. The vault is still here. It’s going to be safeguarded by the fact we’re trying to have very low tensions in the Arctic areas militarily.”

Published in Svalbard and Planet