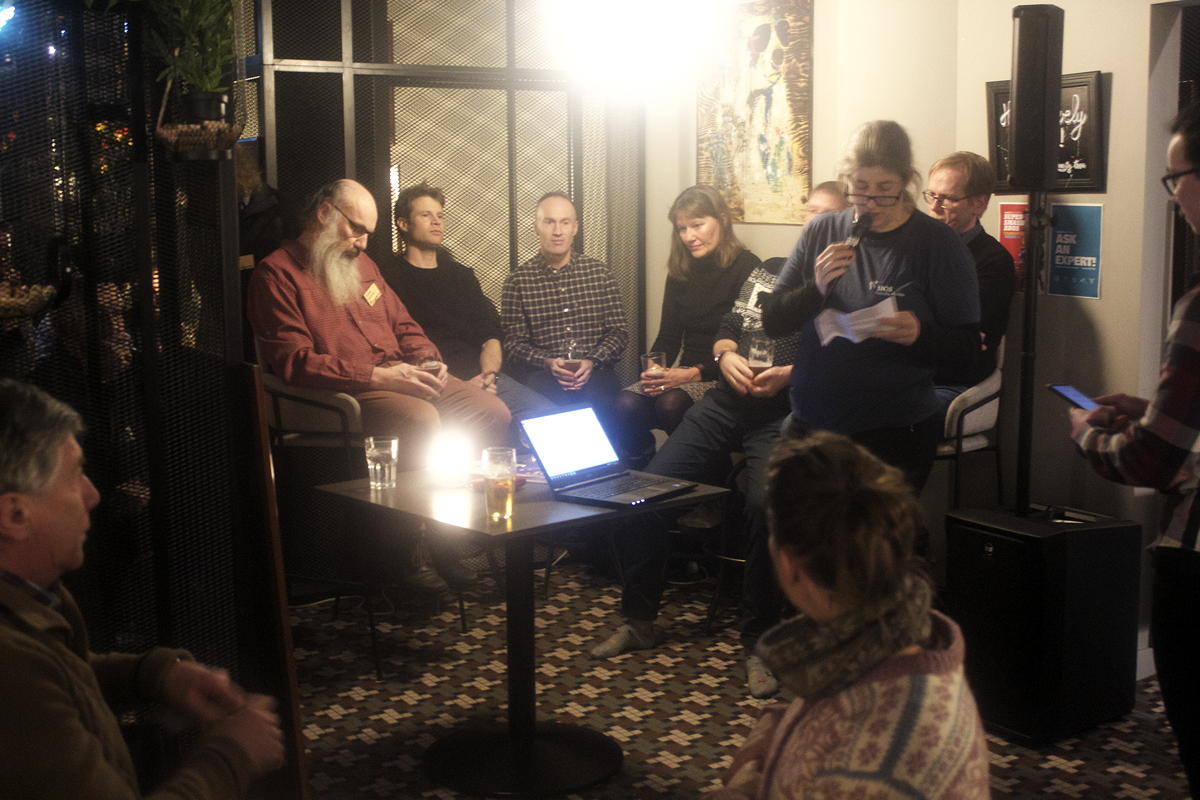 When it comes to popular Svalbard topics like climate change and zombies, there’s unquestionably a lot of non-expert nonsense out there.

So in the spirit of “there’s no such thing as a stupid question,” a group of experts in various scientific fields converged Thursday to answer some of the dozens of questions submitted online in recent weeks by Inquiring Minds ranging from the seemingly obvious to the seemingly complex to the seemingly absurd. And even in the case of the latter, they did their best to provide their best objective information in a straightforward and (mostly) straight-faced manner.

That said, the mood at the gathering at Barentz Gastropub, coming near the end of a weeklong conference where hundreds of experts are discussing the state of Svalbard research, was suitably casual for the setting.

Thomas So, emcee of the session hosted by Svalbard Integrated Arctic Earth Observing System (SIOS), introduced the experts by noting their qualifications beyond academic largesse (“the most athletic professor you’ll ever see,” “very silky smooth voice,” “one of the few politicians who doesn’t scare me”). Audience members asking a few spontaneous questions about things like Donald Trump’s climate change skepticism and whether dead people/animals are flown to the mainland since they won’t compose if buried got some of the more verbose replies.

The following are highlight Q&As from the session. Responses to questions not presented during the evening will be posted at SIOS’s website during upcoming weeks, according to organizers.

Q: What does SIOS stand for?

A: Svalbard Integrated Arctic Earth Observing System which, according to spokesperson Christiane Hübner, “works on everything…in order to study this Earth’s system.” (The online submission for questions, by the way, also answers this and notes SIOS consists of 25 research institutions.)

A: “The short answer is ‘the ocean’ and ‘yes,'” said Frank Nilsen, an oceanography professor at UNIS.

“The bit longer answer (is) 60 kilometers outside Spitsbergen you’ll find a very warm current. It’s the last leg of the Gulf Stream before it enters the Arctic system. This current has increased by 1C in the last 30 years. That’s an enormous increase for an ocean mass.” He also noted wind is a factor by bringing warm air to Svalbard, and pushing the ice northward and altering waterflow.

But Nilsen said the current winter may help reverse those changes.

Another “normal” year and Isfjorden “can get back to being an Arctic fjord again,” Nilsen said.

Q: Will there be another ice age?

A: “That’s a very interesting question considering the conditions we have in Svalbard at the moment,” said Hanna Christiansen, a professor who is the foremost permafrost expert at UNIS. She said inter-glacier periods between ice ages historically have lasted 10,000 to 20,000 years and “I would say we’re about 10,000 to 12,000 into the current one. Under a normal time period we could have several thousand years” until the next ice age.

(So we’re fine for another year at least,” So quipped.)

Q: Why do Arctic terns have to fly all the way to Svalbard?

A: While common terns breed in mainland Europe and migrate to Africa, “the Arctic tern is adapted to the cold,” said Maarten Loonen, a professor at the Arctic Centre of University of Groningen in The Netherlands. “The birds need to find a place where they are well-adapted and other birds can’t fly.” Which is why they make an annual migration from Svalbard to the Antarctic and back.

Q: How much mircoplastic is present in Arctic sea ice and how about nanoplastics in marine organisms?

A: -“If you go on the beaches during the summer you see lots of plastic; those are are macroplastics,” said Kim Holmén, international director of the Norwegian Polar Institute (who was selected as an atmospheric expert, but was initially asked about oceans). There is also a considerable transport of substances to Svalbard because it’s at the end of the Gulf Stream.

“We actually find quite a lot of microplastics in the ice and in the marine life around here,” he said. “We also find nanoplastics in snow; it turns out it is also transported by air and deposited with snow…this is a new discovery we haven’t really analyized yet and it probably makes it into the food chain.”

Q: Why aren’t scientists able to communicate the crisis of climate change to the politicians and communities around the world?

A: “Actually, I think we have quite a focus on these things in Longyearbyen because we’re living where we are,” Christiansen said. “We probably have a special possibility because of where we are…often it’s my feeing we can educate the different people coming…I think that is already what we are doing.”

Q: How can we persuade Trump?

A: “I will be in Washington in two weeks’ time,” Holmén said. “I believe in sharing information. I do not believe they will listen if we scream and yell. In the end facts, knowledge and credibility is very important. If you’re standing face-to-face they cannot call you names.

Q: What is the oldest rock in Svalbard and how old is it?

A: A study from 2001 revealed a rock in north Svalbard that’s 2.709 billion years old, give or take 28 million years, said Malte Jochmann, a PhD student in geology at UNIS. “That’s quite young when you consider the Earth is four to six billion years old.”

But rocks now being brought from Finnmark to control the flow of the river in Longyearbyen exceed those naturally found here because they’re nearly three billion years old, he sa

Q: Do you think Svalbard would be a good place in case of a zombie apocalypse?

A: “I don’t know so much about zombie personalities,” said Holmén, who is frequently pictured in a lavishly colorful hat that would might other creatures with unorthodox appearances feel more at ease. “They are quiet, they grunt a little and they are interested in feeding. There is not so much food up here for zombies, so maybe it’s not a good place for them.”

On the other hand, “there are a lot of introverts in Svalbard so maybe they could find good company,” he said.

Q: Is Spitsbergen a convenient place to store nuclear waste? (“There are not so many people,” the questioner quietly added to a companion in a remark unheard by the panel).

A: “You need very stable conditions and you need rocks that leave the heat in a good way and “I would say in a very long perspective…if you make a very, very, very deep hole in the ground I would say yes,” Jochmann said. But overall “there are many earthquakes here. I would say we don’t know enough about the geology here.”

Q: If bodies are not decomposing, what do you do with those bodies? Also, what about animals. Do you fly them to the mainland?

A: Christiansen, while not quite answering the full question directly (no, dead animals aren’t flown to the mainland…among other thing their carcasses are a critical food source for some wildlife), noted that if a body is buried deep enough it actually becomes part of the permafrost. But Holmén added “it turns out digging in permafrost is difficult (and) there is decomposition,” and a study during the 1990s discovered pathogens from buried bodies were preserved.

Also noted during the discussion is there are about 900 graves in Svalbard, including mass graves from whalers who “believe one day that there would be a resurrection and if they wanted to be a part of the resurrection they couldn’t be left at sea.” That meant even those who died aboard ships en route were buried here. Today erosion and climate change is exposing some of those graves, and clothing as well as bones as being found since the process of decomposition is extremely lengthy.

(Not mention during the session is that while bodies can no longer be buried in Svalbard – hence the commonly repeated “illegal to die here” myth – people’s ashes have been buried here after obtaining official permission to do so.)