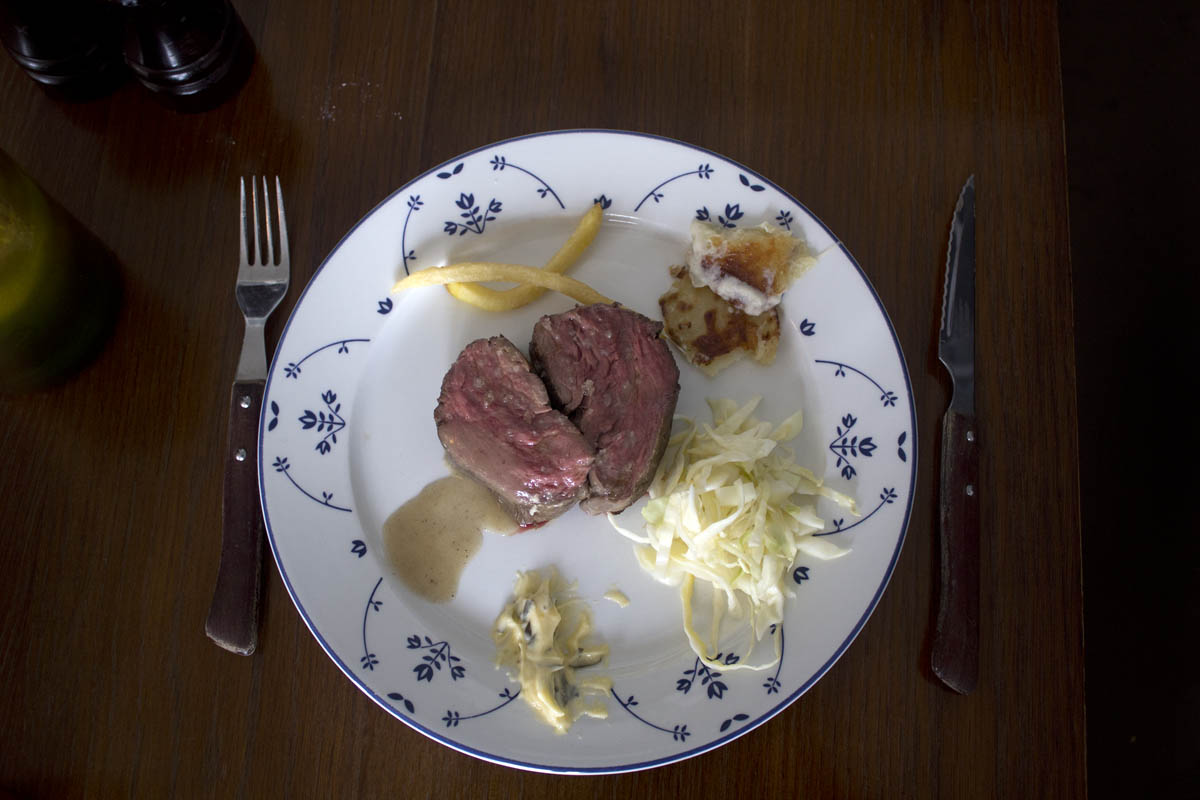 LORDAGSBIFF AT HUSET: A review of Svalbard’s most iconic mining-era meal

(Editor’s note: This review, written in the spring of 2018 as the opening of a planned ebook that remains unfinished, is being published in advance of the 60th birthday celebration of Huset on Saturday, when lordagsbiff will be served from 2-6 p.m. for 60 kroner.)

This is what it’s like to eat the ultimate traditional community meal in the world’s northernmost town.

You enter an unremarkable and isolated building near the foot of a glacier three kilometers from the town square, well past the walking range of tourists paying more than ten times as much to eat a tasting menu in the famous formal restaurant in an adjacent room. You take a quick left into a casual bistro just past the no-attendant (and thus no-tip) coat room, where a half-empty assortment of booths and tables with a bar against a long wall next to the kitchen awaits.

It’s somewhere between early and late afternoon on a Saturday – hardly peak dining hours (most locals on this spring weekend are likely taking snowmobile trips to their cabins or elsewhere). Decades ago the dining area was mostly filled with salty-tongued coal miners; now a couple of kids playing hide-and-seek among a couple of sofas near the entrance will be watching cartoons on smartphones when they join their parents at a table when the food arrives.

Tables are occupied by groups reflecting a remarkable shift in the community’s diversity in recent years: a few of the last remaining coal miners at one, a couple of retired women who cooked and cleaned decades ago for miners at another, a young group of tourism workers taking advantage of the unlimited side dishes (and lots of beer) with vigor after a strenuous expedition outdoors, a family spanning three generations whose collective resumes are a mini-history of the town.

The first order of business is ordering – and what has been a long tradition here is now the height of trendiness in oh-so-many places at latitudes far to the south. Think “fast casual” (order food at the register, which is delivered by a server). A savvy polar promoter might plug the experience as the world’s coolest steak frites in the spirit of the famous French chain Le Relais de Venise (cheap meat and potatoes with extra helpings available). But here the order is lørdagsbiff (“Saturday beef” in English).

By Norwegian and Svalbard standards it’s a remarkable bargain at just over USD$20, roughly equal to the French chain in its homeland and far below what the chains in Europe charge. But the experiences are so vastly different direct comparisons are useful only in illustrating how the different ways uniqueness can enhance an otherwise ordinary dining experience. (In short, to get Le Relais de Venise out of the way quickly, people wait in long queues to eat the mysterious butter-based sauce covering fairly ordinary meat, accepting quirks such as the fact there’s no ketchup for the decent fries and the maddening inability get your meat cooked medium-rare).

Servers at Huset bring plates with two inch-thick discs of entrecôte fillets that are almost the perfect definition of a proper serving size (a.k.a. a deck of cards). Paired with a small mound of shredded small cabbage (eventually I hope to learn why) an unaware visiting diner would likely give the sparse plate a one-star Yelp review for the ages. If, however, said review was willing to wait a minute after seeing said plate delivered to a neighboring table they’d grok the real appeal of the meal.

Diners take their half-empty plates to an obtrusive corner of the bistro – seriously, unless you know about it you might miss it – where a table with two sauces (herbed mayo and a basic brown gravy during this particular week) and two or three types of potatoes (french fries and sliced German pan-fried on this occasion) await. Glasses and water are also provided, as is free coffee most diners linger over when the food is finished.

The bad news about the buffet: the fries have never been more than meh despite many samplings, ranging from chewy when just out of the frier to nearly rock hard after cooling for a time. Still, like pizza it’s not like folks won’t be willing to finish off a pile of them, often doused in those sauces. The sliced-and-baked potato dishes fare better, especially if you can snag the crisped top portions.

As for the sauces, as someone who’s eaten beef of all grades rated OK for humans (and some only for livestock) all over the world, I tend to shun toppings in favor of appreciating the qualities of the meat (dry rub on barbecued cuts being a massive and obvious exception). The choices here are an unremarkable thin brown sauce and a thick bearnise/mayo that’s actually an ideal compliment for nearly everything else on the plate – it turns the cabbage into coleslaw, is a good dunker for the fries and would be a fine part of a steak sandwich if they served hard-crust rolls.

Now, to meet the meat.

It’s of decent, but definitely not prime quality. Fillets, due their low-fat content, tend to trade tenderness for less flavor, which justifies why the sauces are used by most eateries. The default doneness is medium and, while somewhat bloodier beef is best when it comes to many other cuts, experience over a few dinners suggests that’s the best way to go here. The cuts lacks the fat content (and flavor) to be a smooth chew when the centre is lukewarm, but All things considered the flavor of the naked cut is better than expected. The fillets at Huset are wisely seasoned with a restrained amount of large-crystal salt that in itself was an item of discussion at one nearby table. It’s enough to make eating the cut naked a preferred option – speaking as someone firmly on the side of those arguing that if you’re into the sauce covering a meat get a burger or Walmart-quality cut.

So we’re talking about OK, but unremarkable food and service. So let’s talk about the third element of most major reviews: ambiance.

Over the four meals for this review I’ve had life-inspiring encounters with people lasting three hours and in-and-out ingestions of 30 minutes while listening to miners at the next table chat about local gossip.

While it might be overlooked as a common courtesy at casual diners and most-expensive experiences everywhere, consider that the near-universal habit of lingering over cups of coffee that a “trendy” bistro might make major per-mug money on is a seemingly invisible part of the evening.

So what’s the bottom line if you’re a newcomer looking for a review? Roughly the same if you go into a big-city biker bar and base it on its gourmet burgers or the experience (although you’re much less likely to have your lungs collapsed while fighting dozens of outlaw bikers in a See-Em-Dead-Zoo-Bar-And-Grill-Massacre at the humble hangout at Huset).

Which means, on four-star scale used by The New York Times where one star rating of “good” is supposedly cause for nice neighborhood places to celebrate, a likely zero-star rating of “satisfactory” compared to the Prime/Kobe slabs of dry-aged flesh (a.k.a. where lots of weeks-old mold is shaved off just prior to cooking) grilled at 1,800ºF for the low, low price of US$300 or so (creamed spinach extra). Which to be honest, much as they’re easy to mock, are indeed tasty mounds of muscle and fat.

But that’s an insane comparison – although admit I’d consider a vegan dining review here a decade ago just as insane, although expectations have changed massively since then. Still, this a very specific meal where the “ambiance” factor used by most pros is off the charts. So unless you’re not inclined to approach/dine with coal-loving savages who’ve been eating meat-and-potatoes plates for decades (or cold-hearted bureaucrats who moved here last year),