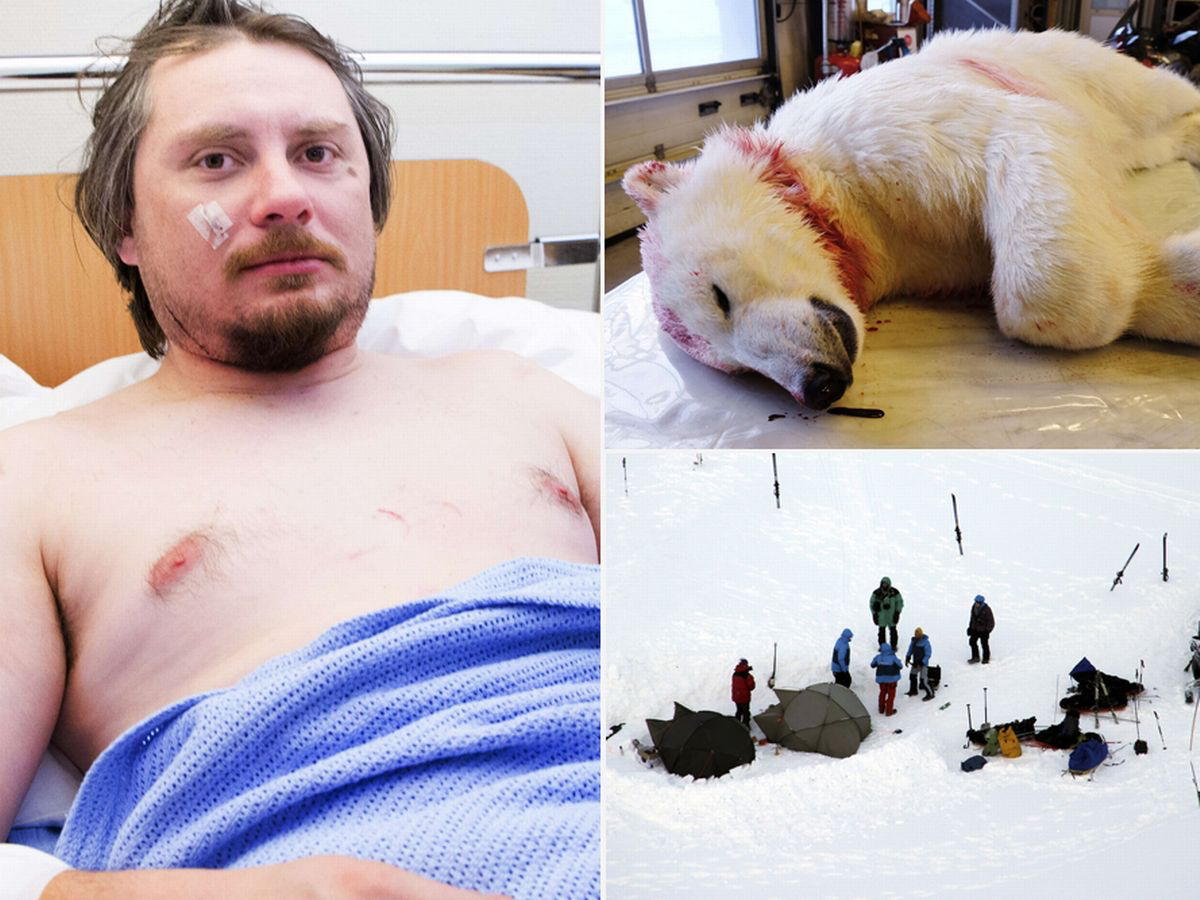 Ammosexuals get off on another Svalbard fantasy involving polar bears, Bjørnøya addicts gets a re up of their drug of choice and (maybe) hookers selling themselves for a fix, and the recent failure of our shinny new research ship is blamed on Those Dark People.

The photos above are an example of a successful defense using a handgun again a polar bear attack in Svalbard – or so says the big-caliber brains at ammoland.com. An article headlined “Handgun or Pistol Defense Against Bear Attack: 73 cases, 96% Effective” features a lengthy incident-by-incident recap of attacks by location, type of handgun, etc. Two are from Svalbard, including the 2015 attack on a Czech group camped about 60 kilometers from Longyearbyen. Here’s Ammoland’s version: “On Thursday, 19 March, 2015, a woman with a .44 magnum stopped a polar bear from attacking Jakub Moravec, 37, in the Svalbard archipelago. Polar bear attacks are expected there, and tourists are not allowed unless they carry a high powered firearm. In this case, the rifles were left outside the tents, but inside the protective alarm wire. The armed woman, mother of Zuzanna Hakova, shot the bear three times with the revolver.” As the link above to one of our stories about the incident show, in reality 1) the group ignored many reports of sightings of the mother and her cubs nearby in the previous days, 2) the tripwire alarm system was set up wrong, 3) nobody was standing guard when the bear invaded the tents, 4) one man was hospitalized with injuries that turned out not to be too severe, 5) the group delayed officials and then continuously misled officials about what happened, 6) the leader was prosecuted for negligent violations of Svalbard’s environment protection laws and – what most knowledgeable folks cared about – 7) the wounded bear had to be tracked down and killed by officials (and the cubs had to be killed too because they couldn’t survive on their own). Oh, by the way, everybody here official and/or with knowledge says a handgun is a poor or completely useless alternative to a rifle – even the utterly clueless fictional “Fortitude” made it comedy scene at the beginning of their first episode. So, to invoke the famous phrase of a political lefty the ammosexuals love to still use as target practice, in this case it definitely depends on what the meaning of “effective” is…

You might think people living at a place named “Bear Island” wouldn’t need chemical stimulants to ensure they’re alert. But the brains at the Bjørnøya Meteorological Station apparently each go through the equivalent of 800 “eight balls” of their drug of choice a day. So reports The Local Paper of Recreational Stimulants about the arrival of the boat delivering essential supplies to the nine station occupants, noting that while the shipment includes a full year’s worth of diesel and toilet paper, the 50 kilos of coffee is likely to only last two months. The wordsmith warriors across the street estimate that at that rate the station goes through liters of brewed coffee a year, or 1.5 liters per person a day. Like all junkies, a justification is offered by those at the station, noting folks have to be on 24/7 watch and they’re always giving away free tasters to those dropping on what’s essentially a very chill open-air market indoors. Of course, since annual shipment of stuff can’t cover all that there are several smller re ups of coffee and other stuff, although of course seeming essentials for others like fresh food don’t seem to be quite as high a priority. “We are still eating yogurt with an expiry date May 12, 2019, and still drinking milk with expiry date of June 12,” said Maiken Vassel, a meteorologist at the station, when the big shipment of stuff arrived last week. Which meant, according to the official newspaper’s account, the strawberries with the shipment were most welcome. Not that we’d accuse the mainstream media of not being streetwise, but there’s no mention if we’re talking about the actual fruit or (as Vice puts it) “females who trades sex for crack or money to buy crack…”

Since nationalism is having another period where it’s all the rage, so to speak, at least Svalbard can feel inclusive thanks to the always non-PC Resett which published a column this week demanding to know why Norway is allowing Italy to build ships for our nothernmost waters after the embarrassing maiden Arctic expedition last month by the Kronprins Haakon. The 1.5-billion-kroner research vessel with icebreaking capabilities, which performed fine in Antarctica and a test run late last year in Svalbard, suffered significant damage and had to abandon its mission when it encountered thicker-than-expected ice it still should have been able to cope with. “Our politicians should be ashamed: Russia is the world leader in the design and operation of icebreakers and Finland is the world leader in the construction of icebreakers,” the column notes. “Norway was to have long ago used Russian and Finnish expertise and built reliable icebreakers and then acquired the necessary experience to operate them.” It also asserts the government screwed up not too long ago by relying on a Spanish shipmaker that make five vessels without icebreaking capabilities, probably to save money. Not terribly terrible in terms of a typical The Way Things Ought To Be declaration with no constructive advice. But the Real Patriotism comes in the 70+ and counting reader comments (tip: by clicking on the usernames you can get their full worldview with remarkably similar rants on all subjects) as they attribute Sending Our Jobs Elsewhere to motives such as a shipbuilders’ preference to welcome more Dark People (“lifeboats to the Mediterranean to provide for more immigrants”) to mocking Climate Alarmist Scientists (“it has been ice-free at the North Pole for a long time now, according to the climate models”). 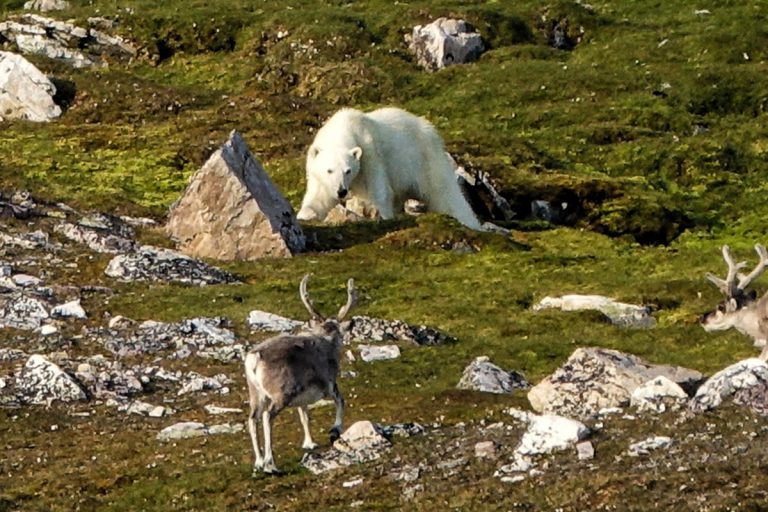 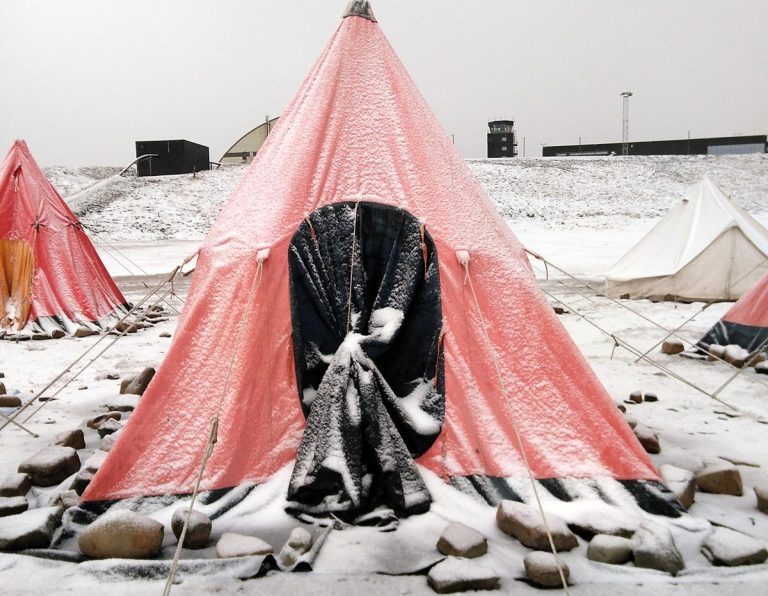 Next post FIRST SNOW IN LONGYEARBYEN: OK, not the first ever, but locals get mid-August preview of the coming winter as much of the world bakes