Researchers at Station Nord, a military installation at 81°43’N that’s the northernmost permanently occupied spot in Greenland, are hoping a solution is in place that will allow direct flights to and from Svalbard, according to Altinget. Denmark’s Ministry of Foreign Affairs and Integration has approved designating the station a border crossing point for the Schengen area, which is necessary for direct flights since Svalbard is outside that zone. At present researchers are forced to make costly and lengthy flights to Schengen checkpoints far to the south in Greenland before flying to Svalbard.

The number of guest nights at Svalbard hotels and lodges declined 4.2 percent in June compared to a year ago, according to Statistics Norway. The number of guest nights rose steadily from about 12,000 in 2013 to about 16,900 in 2018, but dropped to about 16,200 this year. The umber of foreigners has risen consistently during that span while Norwegian visitors are declining. This year’s figures are at odds with the rest of Norway, which as a whole saw a record number of hotel guests, although there were considerable variations by region with west Norway recording the biggest increase.

Longyearbyen, which for many years had only an occasionally visiting veterinarian for the town’s many dogs, now has a much enhanced lone veterinarian office as a grant is allowing the hiring of a full-time duty watch caretaker for when the lead veterinarian who owns the business is not available. “It is a milestone for us and absolutely necessary to run a good veterinary clinic,” Astrid Vikaune, who started Svalbard Vet six years ago, told Svalbardposten. 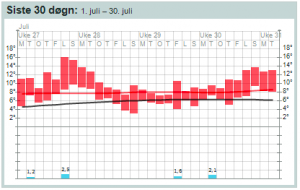 • Wednesday, July 31: 104 months of above-average temperatures in Longyearbyen (but that’s nothing compared to…)

July’s average temperature of 8.4 degrees Celsius at Svalbard Airport is 2.5 degrees above the historical average, making it the 104th month in a row Longyearbyen has been warmer than normal, according to the Norwegian Meteorological Institute. But the statistic that will burn in the minds of most people is July will be the hottest month recorded in history – beating only the same record that was set in June.

• Tuesday, July 30: The Dream of Open Borders Is Real—in the High Arctic
Svalbard has been open to citizens of the world since 1920. But don’t call it a utopia. There’s a dismal symmetry at play: As climate change renders the rest of the planet as hostile to human life as the far north, we too must make the choice between throwing up walls and letting them down. Svalbard’s geopolitics provide an imperfect but alternative vision of how places can be governed, whom they can accommodate, and how communities can form.

• Monday, July 29: Leading climate change denier: ‘Abundance’ of polar bears, ‘shockingly thick’ sea ice defy mainstream science
A blog that’s the primary source for 80 percent of blogs and other publications rejecting the scientific consensus about man-made climate change reports the sea ice between Svalbard and the North Pole is “shockingly thick” (in contrast to current headlines of record heat wave and ice loss in the Arctic), and there are an “abundance” of 39,000 polar bears worldwide (claiming mainstream scientists refuse to do such a count). Susan Crockford, editor of the denalist blog Polar Bear Science, asserts there are between 26,000-58,000 polar bears globally, compared to about 10,000 during the 1960s. She also reports expeditions using icebreakers north of Svalbard are being delayed or thwarted by first-year ice up to three meters thick, which by traditional definition, should be “impossible.”

• Sunday, July 28: Bjørnøya staff join the many Svalbard coastal cleanups – but need someone to take out trash

Employees at the Bjørnøya Meteorological Station joined the growing number of people and organizations cleaning trash from Svalbard’s shores by taking a dayboat trip to Nordhavna on the island at the southern tip of the archipelago, collecting three large bags of waste they say now needs to be removed by somebody willing to do so. “Many of the beaches on Bjørnøya have large quantities of plastic,” wrote Erling Schjølberg, a technician, in a post at the station’s blog featuring photos of the cleanup. “We try to do something about the problem when we have the time and the opportunity…There were three full sacks in just a short hour.” Staff have contacted The Governor of Svalbard in the hope of arranging for the bags to be picked up.