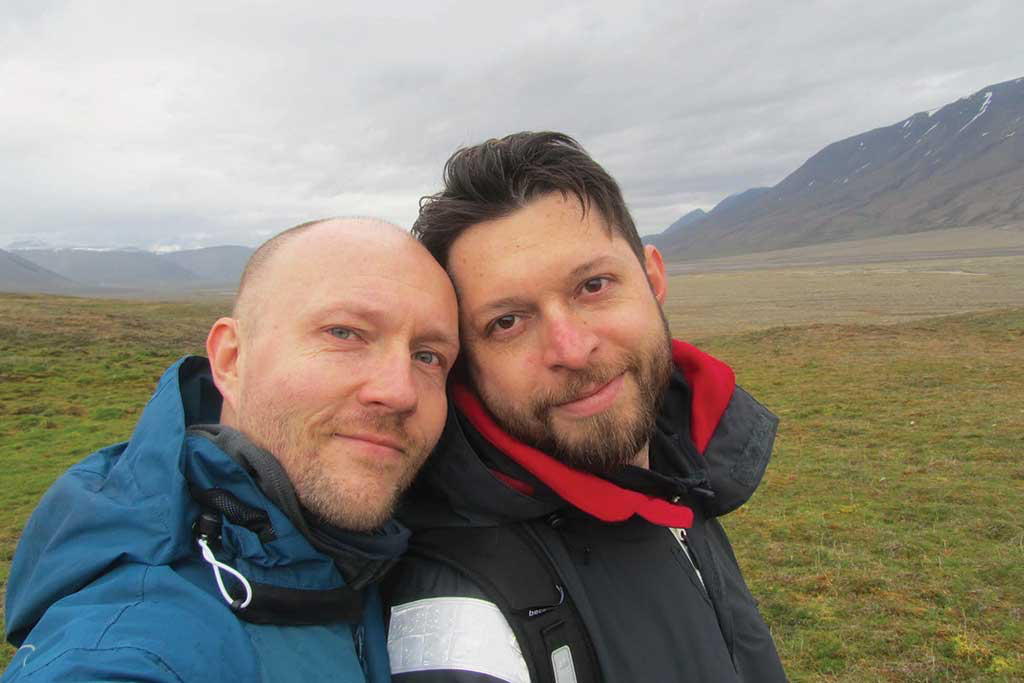 If a polar bear is charging, it seems unlikely even the most hardcore homophobe is going to care if the guide with the gun is gay.

In more everyday matters, nobody seems to bat an eye when gay couples hold hands sitting at cafes or walking down the street in Longyearbyen. There’s no known stories of people losing jobs/homes because of their sexuality. No known place people flock to for fast food because of its embrace of “traditional values.” Some outsiders even suggest “Santa Claus’s stomping grounds” offer “an eye-opening reverence for bisexuality.”

So why are local folks hosting the town’s first-ever Pride event, featuring a parade and evening of entertainment, shortly after the cruise ship season ends a few weeks from now?

“Pride is about showing support to the LGBT community,” even though the (known) number of such residents is “very small,” said Lene Jeanette Dyngeland, an art workshop business owner organizing the Longyearbyen Pride event on Aug. 17. “There are not too many against LGBT in Longyearbyen, but we want to show that our town is diverse and includes all. No matter who you are, or who you love, you are welcome in Longyearbyen.”

LGBT rights from marriage to blood donations are pretty much “green lighted” across the board – although conversion therapy is not banned. It can also be argued they have special rights because “homosexuals serving openly in the military in Svalbard” is legal, at least according to a global database site whose programming code apparently doesn’t take into account military activity itself in the archipelago is severely limited.

Of course, since being out of the closet looks a whole lot like being in it here, clearly nobody’s felt the need to engage in the protests and awareness campaigns seen in other countries where homophobia ranges from legalizing death to policing bathrooms (although the recently installed mixed-sex bathrooms at Lompensenteret – one large room with stalls for male/female/handicapped – are provoking some head-scratching among visitors unclear protocols for peeing). And Dyngeland is calling her event a party rather than any kind of political/protest event.

The event starts at 4 p.m. with a parade proceeding from Svalbardhallen to the Radisson Blue Polar Hotel, which is described as just-show-up informal (flags will be available at the starting point). Events at the hotel will include music and speeches in the parking lot followed by a party inside at Barentz Gastropub (including a best clothing competition), with the evening ending at with a DJ nightclub patry at Huset (free buses from the Radisson will be available).

Dyngeland said the city is providing technical equipment and placing rainbow flags on flagpoles around town, Mayor Longyearbyen Arild Olsen will be among the speakers after the parade, and several local businesses are contributing services for the event.

There are no plans at present to expand Longyearbyen Pride or local LGBT awareness beyond the event itself.

“If this event becomes a positive thing, with lots of participants, it will be bigger next year,” Dyngeland said.

As of this week the Facebook page for the event shows “27 Going • 143 Interested.” While it’s safe to assume most of the participants will be local since the event was deliberately scheduled after the last large cruise of the season departs, at least one previous Svalbard visitor experiencing the “scene” here suggests it’s likely to be among the gayest happenings he can imagine.

Joseph Pedro, in a 2016 article for the LGBT-oriented Passport magazine, began his explorations by hooking up (platonically, as if it need to be said) with the Arctic Husbands known as Jorge and Stian Kristiansen. Over drinks Pedro notes there’s brief mention about Gay Pride Week in Pedro’s hometown in New York and “I assure them that the first-ever Longyearbyen Pride will trump any celebration in the States.”

Beyond that, the whole homosexuality thing merits one other paragraph in an article a few thousand words long.

“My assumption is that the blue-collar heavy, mining town must not be the best place for gay people,” Pedro wrote. But his hosts tell him “the community here is very open and our sexual orientation has never been an issue in our jobs or in the social life. For example, last Christmas we attended the respective Christmas parties from our companies as a couple and people were very welcoming.” Afterward, the writer adds, “we stampede through town, basking in the midnight sun, and celebrating our impromptu ‘pride.'”

Jorge Kristiansen, who was working as an executive consultant at The University Centre in Svalbard, said he and Stian moved back to the mainland about ten days ago after living in Svalbard for nearly six years simply because it was time to “start new plans, adventures and challenges.” Since they’re starting new jobs next month they won’t be at Longyearbyen’s Pride event.

Pedro’s visits to the Russian settlements of Barentsburg and Pyramiden involve adventures such as a female bartender giving him “a hardy grandma pinch on the cheek” when he refuses a shot of Russian vodka, after which “she quickly uses her crane-game hand to pull me forward and pour it down my throat” (OK, now that’s a potential controversy).

But the Russian politics that infiltrate the settlement did have a moment involving homosexual hostility in 2013 when a German visitor identified only as “Martin” distributed assorted pro-gay memorabilia, plus calls for a boycott of the 2014 Winter Olympics in Sochi, throughout Barentsburg as a “creative protest” to Russia’s new law making homosexual “propaganda” illegal, according to the website queer.de.

“Some local people have looked at me funny and began to call,” but nobody halted his efforts, he told the website queer.de. “As for the political impact, Barentsburg plays a very important geo-strategic role for Russia and the action could, if photos are circulating through the Internet, receive much attention (from people) in Russia.” (The law remains in effect and a similar one adopted in China.)

Other writers for LGBT publications have managed to marvel at Svalbard’s openness – and not just in the usual “open borders” and “amazing vast environment” ways.

“From openly gay mushers and seal hunters in Svalbard to Tromso’s prolific Prince Harry doppelgangers to Stockholm’s show stopping Viking pedigree, Santa Claus’s stomping grounds are a land of beautiful people and unwavering tolerance,” a 20122 article in Out magazine headlined “Gay Life Around The Arctic Circle” asserts. “The polar bar scene unites all demographics and desires, including an eye-opening reverence for bisexuality.”

For those seeking specific travel tips in Svalbard, Barentz Pub gets a specific mention in the article as “the principal watering hole for the island’s student population, those in the biz, and visiting tourists, with no shortage of rugged yet open-minded locals downing MACK Arctic Beers and sucking on fresh glacier ice cubes.” More recently, Michelle van Dijk, owner of Longyearbyen Camping and a crew member aboard ship expeditions around Svalbard, notes the pub remained the gay hangout spot of choice for visitors seeking/offering recommendations (although it underwent a complete overhaul last year and thus might be drawing in something of a different crowd).

But, much like mothers who openly breastfeed kids in cafes during the day without raising the ruckus that seems to occur elsewhere, it’s not like those taking part in the scene are much of a scene, so to speak. Job Kootte, an Amsterdam resident who was the campsite’s manager in 2018, offers nary a mention of his sexuality or anything related during his summer blogging here. In fact, the only reference at all seems to be a stop while hitchhiking here where he wraps up a post by declaring “now I’m off to find a nice gay bar to have another beer and hopefully see a drag queen get in a fight with a drunken sailor. Flensburg is, after all, a town off sailors and brewers.”

For the many folks stressing about public schools “indoctrinating” kids about things like non-traditional gender stuff, it’s probably best to avoid anxiety about the impact of the Longyearbyen Pride event since it seems the teens here during the four-month-long polar night are already “woke.” More than 70 Longyearbyen School students were involved in staging a version of Peter Pan where all the main characters were female, giving extra meaning to the Peter/Wendy thing and Captain Hook’s companions (not to invoke a different stereotype, but why do you think they call them mates).

But for perhaps the ultimate Svalbard fairy tale (non-PC, we know, but it makes for a nice transition), the current-day series of hardcore gay “romance” novels by TT Kove can’t be beat (OK, maybe we won’t touch that one). The first “T” stands for Tina, but most of her work including her Svalbard-based novels involve men.

Reviews, if they matter, seem clustered around three (out of five) stars, with two distinctions: 1) some state the prose reads like English is the author’s second language and 2) she does a decent job of converying the Svalbard scene – especially those very long polar nights.

“I found it interesting to a point that I keep thinking I need to visit during the polar nights so I can see the Northern Lights,” wrote “Joyfully Jay” on a a blog of that title focusing on “LGTQ romance reviews and more.”

Previous post Briefs from Svalbardposten for the week of July 23, 2019 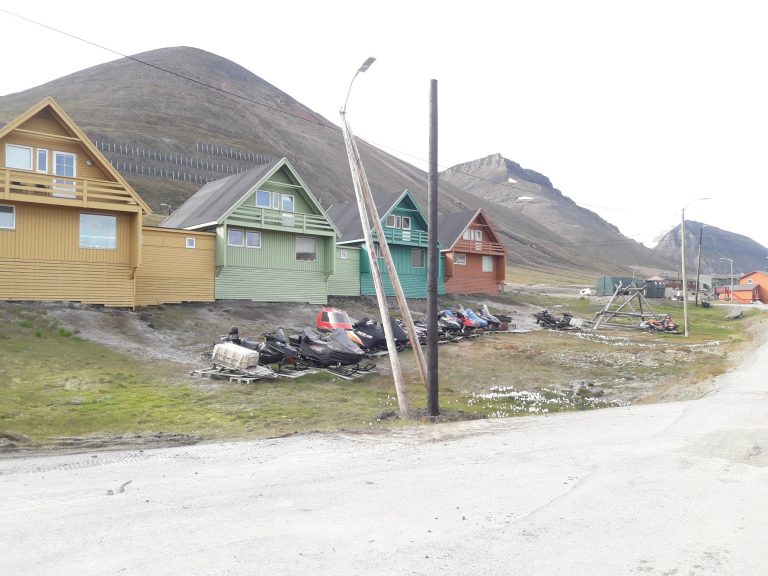 Next post DESTROY AND REPLACE: Three-week excavation at Vei 232, snowmobiles at Vei 230 must go by Sunday for city projects