A man and woman who departed from the Hornsund research station for a weekend trip were found dead Sunday after being caught caught in an avalanche and swept virtually the entire length down a steep mountainside, according to The Governor of Svalbard. 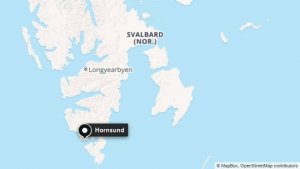 Personnel at the station began searching for Anna Górska and Michal Sawicki after they failed to return as scheduled Sunday morning. The couple was found in a difficult to access avalanche prone area of the mountain Kamkrona east of the station after being swept down the mountainside by the avalanche, according to a press release issued Sunday evening by the governor’s office.

“In connection with the breakage in the forest they fell about 600 to 700 meters,” Gov. Kjerstin Askholt told NRK. The mountain is 770 meters high and Askholt said preliminary indications suggest the avalanche occurred Friday night.

“We sent a helicopter with a doctor and police from the governor’s office to investigate what has happened and to follow up with the other employees at the base,” Gov. Kjerstin Askholt said Sunday evening. “The deceased are now bring brought to Longyearbyen.”

“It is a great area with good views, and so it is a place folks looking to go out on excursions,” she said.

Górska was a meteorologist at the station whose tasks included the ongoing monitoring of atmospheric phenomena at the Hornsund, where aurora activity changes rapidly, according to Polish media reports. Her photos from this season, which date back to last summer, are among the most published in the monthly newsletters published online by the station. She is a former employee of Poland’s Institute of Meteorology and Water Management at the Department of Ground Remote Sensing.

Sawicki was working his fifth season at the station as a geophysicist. His activities have included the Earth’s magnetism, ionospheric research, seismology, and physics and optics of the atmosphere.

The Polish research station about 130 kilometers south of Longyearbyen is typically occupied by 14 people.

“It is with great regret that we were informed that two participants (at the station) were killed during a trip to the mountains in the Hornsund fjord area,” the statement notes. “We are shaken by this tragic death of two young people, and we convey our deepest sympathy to the parents of Anna and Michal, as well as to their families and relatives.”

The Polish research station about 130 kilometers south of Longyearbyen is typically occupied by 14 people. Station Manager Włodzimierz Sielski told NRK employees at the station are in shock and he had emergency meetings with Polish polar officials Sunday night. Askholt said her office is doing what it can to offer comfort.

“Those who work at the station live very close together throughout the winter, so one can only imagine how they have it now,” she said. “We have now organized it so that a Catholic priest and a psychologist from Poland will come to assist those who are left.”