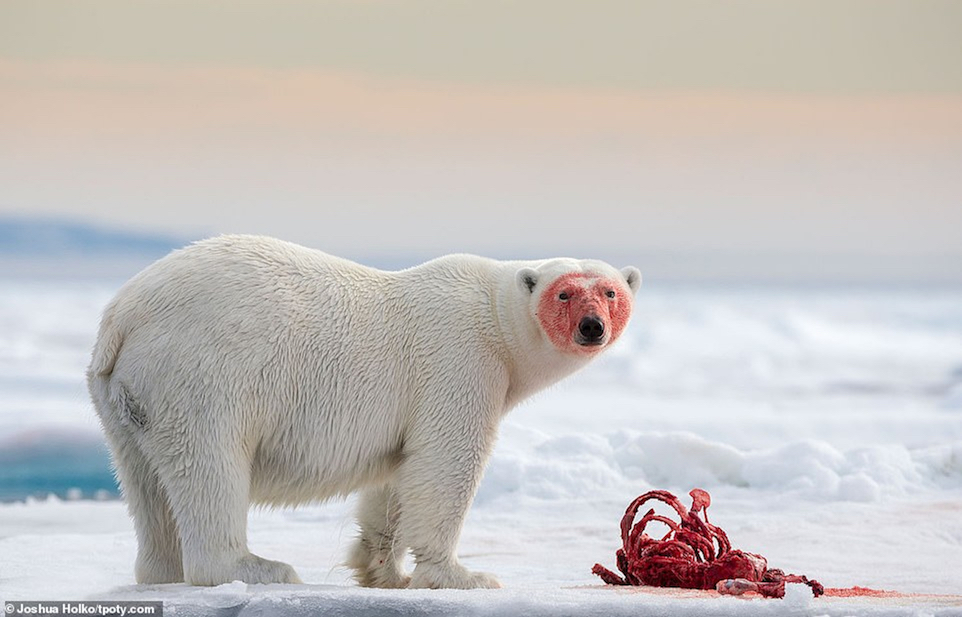 It’s always an honor (cough) to publish yet another award-winning photo in a “Travel Photographer of the Year” contest in this space, this time featuring a polar bear consuming its prey “80 degrees north of Svalbard.” Uh, wait…what?!

OK, maybe Tommy Simonsen, who’s been shooting in Svalbard and other Norwegian areas north for quite a while, really earned that award given the apparently extraterrestrial expedition endured. His photo shows a polar bear eating what appears to be some kind of alien creature (maybe laying in wait for an invasion in some secret dimension above the North Pole). Or it’s possible it’s just an odd bit of seal carcass and a testament to the vital importance of proper comma placement the Daily Mail of London seems to lack in this instance (full caption: “A polar bear looks at the camera with a bloody face after tackling a seal on the ice, 80 degrees north of Svalbard in the Arctic”)…

Speaking of mysterious warps in Earth’s latitude, it seems Longyearbyen is no longer the world’s northernmost city at 78°13′N. Rather, the honor belongs to Honningsvåg at 70°58′43″N, or so says The Epoch Times in what appears to be one of those endless “hosted” trips paid for by tourism companies to coincide with when people are making their summer travel plans. And it’s not a matter of theirs being larger than ours, since the article notes “Honningsvag hardly qualifies to be called a “city” with a population of only about 2,500 inhabitants, but it was declared one in 1996 and has kept the designation.” For those thinking maybe it’s just a matter of a certain missing word, it can’t even technically be called the northernmost city on the mainland since it’s on the island of Mageroya. And furthermore, the author is fully aware of a mysterious higher presence since he notes while taking in a view from the famous North Cape that it “is the very point where the Norwegian Sea, part of the Atlantic Ocean, meets the Barents Sea, part of the Arctic Ocean. It’s said to be ‘Continental Europe’s final frontier,’ with just Svalbard—a Norwegian archipelago located north of mainland Europe—lying between continental Norway and the North Pole itself. But nonetheless 70>78. Maybe it’s because the claim is verified by the always accurate collective known as Wikipedia, which for whatever reason classifies Honningsvag as the northernmost city and Longyearbyen as a settlement (the latter officially became a municipality in more than a decade ago, but what does the government really know?)…

But wait – there’s more! Normally reader comments, that finest of all possible forums for intelligent and reasoned discussion, are merely tacked onto the end of such stories. But this one from guy with the handle @Micolunar merits his own space for this bit of sheer prose: “There’s going to be 13 families that are still alive and saved from mass extinction from Death from assassination from Massacre Valentine’s Day Massacre because it was going to set it up on Valentine’s Day that’s how I knew it was a Valentine’s Day Massacre in the svalbard global.” Wow. actually, we’re kind of town between using the rest of this space to ridicule the guy and hiring him because, really, how could he make things worse? …

And it’s not just the latitude that’s in another dimension this week. Riddle me this: On April 17 there wasn’t a sunset in Longyearbyen. On April 18 there was. How is this possible? Hint: sometime after the second sunset the sun rose a final time to begin the nearly four-month-long polar summer. The answer: The final sunset until the end of August occurred at 12:01 a.m. April 18, followed by sunrise at 1:49 a.m.

Finally, since we’re dealing with the SAS strike that’s keeping so many people from getting to Svalbard because they think it’s the only way to/from the mainland, we present this final item challenging the conventional knowledge of where we are on the map: Andreas Wærstad, 36, began a 22,000-kilometer skateboard trip from Svalbard to Antarctica earlier this month, which will taking a rather indirect route though Europe, the United States, Central America, South America and Argentina. He’s cheating a bit by using a motor-powered board capable of traveling up to 30 km/h, but so far it hasn’t exactly been smooth skating, encountering snow and slippy surfaces the first few days that screwed up his circuits (and the board’s as well, presumably). Of course, the big question on our minds and all those folks at the airports is how exactly did he skateboard to the mainland and did he encounter any more Russian spy whales along the way?

Wait…what?! (For the second time in this week’s virtual real estate, no less). In yet another instance of stupid (animal/Russian/military) tricks, a beluga whale spotted with a harness along the northern mainland coast is suspected of being trained to spy for Russia. Fishermen near the small Norwegian fishing village of Inga told NRK last week the whale wearing a strange harness was harassing them by trying to pull straps and ropes from the sides of their fishing boats. And since the Soviet Union was using dolphins for war purposes back in the 80s and Russia is now obsessed with the Arctic – and harassing everyone else seeking a claim to territory there with everything from taunting tweets to border flybys with nuclear bombers – well, of course that’s what first came to find. There is, however, an alternative theory the whale escaped from a captive training facility in the U.S. state of Florida, in part because it’s extremely tame. In fact, locals say the whale seems reluctant to wander far and are now claiming the mammal has defected from Russia. What does any of this have to do with Svalbard? Well considering Norway considers the area maybe it’s most vulnerable target for espionage and there is a long running series of increasingly hostile and bizarre clashes in the area between the two countries, it seems natural to think the creature might just be biding his time until the ice thaws and whale watching tours begin here this summer. God help us if the Russians have also trained some of the seabirds who flock here by the never-ending thousands in a month or two.

Published in Svalbard and Random weirdness