The overhaul of the mall took considerably longer than planned, caused merchants some dark feelings due to forced temporary store closures and new rent policies, and had many locals feeling dim about the gloomy black-painted hallways. But much like the sunlight outside roaring back to nearly continuous during the past few weeks after the polar night, a mad rush of final decorative days inside Lompensenteret culminated in bright atmosphere and attitudes during its official “reopening” on Thursday.

“I think it’s very nice,” said Espen Klungseth Rotevatn, who is about to be one of the mall’s most prominent and unusual tenants as the headmaster of a new folk high school on the building’s second floor. “Before it looked like a rural place. It could be any place in Norway. That can be charming. But now it’s very professional.”

“I admit at first I was skeptical because it was very dark for a long time, but then I saw the lights and the decorations and it’s very nice.”

From the outside, the shopping center in the middle of Longyearbyen doesn’t look much different – indeed, the most-seen side along the main pedestrian walkway is arguably worse since part of it consists of a featureless wall instead of the storefront windows and a prominent entrance that used to be there. But inside is a literal white-to-black switch along the common area walls, along with rustic wood benches covered with (very securely nailed down) animal pelts, simple cushioned stools, Arctic-themed murals, and plank-lined ceilings from which fluorescent lights and lamps hang.

“Everything is done by locals,” said Trond Strugstad, the shopping center’s leader, referring to the furnishings and artwork.

The reopening ceremony was well-timed commercially since hoards of visitors are crowding into town for the spring tourism season after the slow winter months (which some merchants said seemed even slower than normal this year as part of a wider spending local spending slump). But it was several weeks later than scheduled – and even that came after the multi-year project encountered a long series of various delays and unexpected complications.

“I guess the most challenging case was doing a lot of different work from different avenues year after year, layer after layer,” said Strugstad, who spent much of the reopening day serving cake and champagne to guests after frantically helping other workers with the finishing touches. “There were a lot of things we weren’t aware of. Also, to have the stores open while we were working.”

Tearing apart existing spaces meant dealing with what was behind the walls as they were exposed and the materials to build the new spaces frequently took extra time to arrive – a problem common to nearly all local construction projects since most materials arrive by boat.

“The logistics to the island is really difficult,” Strugstad said. “If you miss one day it can be one month up here.”

Among the mishaps was a cracked ceiling pipe that flooded much of the interior space and forced nearly all stores to close just a couple of weeks before the reopening occurred. During those final two weeks before the reopening “people have worked night and day to get things done,” and there is still some additional currently planned work remaining, although even after that adjustments and fixes are likely to continue on an ongoing basis, Strugstad said.

Nearly all of the center’s merchants are still in the same spaces, although the pharmacy was forced to move from its prominent space next to the now-missing entrance into a less-visible portion of the center of the building. A sports shop with two spaces on opposite sides of each other in one hallway now occupies a single larger space – including the area vacated by the pharmacy.

“I’ve got everything in one location, so that’s nice,” said Gry Sneltuedt, owner of the sports shop and tenant in the mall since 1997. “It makes it bigger, which is what I wanted last year. We’re really happy about the way it is now.”

As for the center’s overall appearance, “I think everything happening the past few days has made it very nice.”

A new merchant occupying a smallish renovated space at the center intersection of the mall (where the small of the sports shop’s spaces was) is Skinnboden, which opened a branch of its main store and hired one extra employee for the new space where animal skins and other relatively exotic merchandise is sold. Signe Mørk, the shop’s general manager, said they debuted in the new space three week’s ago after they were solicited by Thon Eiendom and, while they’re still waiting for a sign abov ethe entrance and traffic so far is slower than the main store, they’re happy with the decision.

“It’s taken a long time because the opening of the center was delayed,” she said. “But now it’s OK.”

As for the mall’s new look?

The overhaul is one of many since Lompensenteret was first completed in 1985. Initially coal miners gathered there to change into work clothes and left them there to be laundered, and they often ate simple and large meals at a cafe at one end of the building. It was converted into a shopping mall in 1997, with various parts of the space occupied by a rotation of retail, office and public entities. a large empty space where the folk high school is expected to debut this fall, for example, previously was home to Longyearbyen Library for several years. Before that it was used by Svalbardbutikken to sell electronics and other non-grocery merchandise. 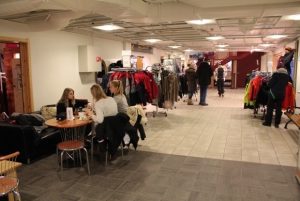 The purchase of Lompensenteret by Thon Eiendom, which manages more than 70 other shopping centers in Norway, became official on Jan. 1, 2014. Some concerns were expressed locally about the company’s plans to update the complex’s appearance and policies to its malls on the mainland, tenants said they were encouraged after an initial owner/tenant meeting later that month. Marit Kristine Melby, head of Lompensenteret’s tenants’ association at the time, said the new owners promised improvements in the common areas “reasonably quickly” and pledged not to interfere in the operation of shops in the center.

But an overhaul that took more than five years to complete probably isn’t what anyone assumed “reasonably quickly” meant and Amfi did indeed issue some decrees that significantly affected some merchants – or forced them out of business altogether.

Sushi KITA and Taste of Thai were given only a few weeks notice they were being evicted from the center to make room for a new restaurant that turned out to be Stationen (which is reviving a few nostalgic elements of the long-ago miner’s cafe that occupied the space). While the decision clearly made economic sense, since the new restaurant with its large gastropub menu is thriving whereas the two Asian eateries were struggling, numerous people complained the evictions worsened Longyearbyen’s lack of diversity in terms of dining options and the town didn’t need “just another” restaurant serving crowd-pleasing pub food.

The new owners also imposed new rental terms on merchants in the center as existing contracts expired that based part of the rent on sales, prompting some to complain (without being willing to be named, due to worries about provoking hostilities) the result meant higher payments that could endanger their ability to operate profitably.

Another change announced during the early reconstruction phase was merchandise racks and other items in the hallways of the mall would be restricted or eliminated. While such items are not banned entirely in the new layout, they have been significantly scaled back with a line about a meter from the walls of the interior defining a “boundary.” While that has allowed some improved rest seating in common areas, it also in the case of Fruene means losing two long tables with sofas and chairs outside the entrance that could accommodate about a dozen people when the cafe is full to capacity as is often during the case during peak tourism periods.