Svalbard is already 4°C warmer (7.3°C during winter) than 50 years ago with devastating and fatal consequences, and will be a total of 7°C to 10°C warmer by 2100 without drastic action. 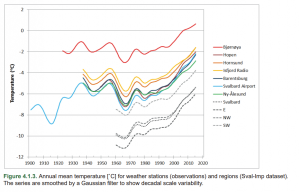 Those are the stark findings in a few simple numbers and words of a “Climate in Svalbard 2100” report released Monday that essentially summarizes an avalanche of data climate scientists here and elsewhere have collected in recent years. While the findings are known to experts – and plenty of policymakers who’ve chosen to accept or ignore various findings – the report’s authors are hoping the plain-language draconian warnings will shake up people impervious to complex and detailed studies.

“It is rare that I use words like this, but what is happening in Svalbard is extreme,” said Ellen Hambro, director of the Norwegian Environment Agency, in a statement about the report at the agency’s website. “The temperature is rising faster here in the Arctic than anywhere else in the world, and climate change has already had major consequences for nature, animals and the community on the island group.”

The report, prepared for the agency by Norwegian Climate Service Center, was unveiled during a presentation Monday night at The University Centre in Svalbard, where three of the contributors work. It projects climate gas emissions comparing the years 1971–2000 to 2071–2100. A separate climate profile for Longyearbyen was also presented.

The Svalbard reports states the archipelago’s annual mean air temperature will increase by 7ºC under a medium “no-change” scenario to 10ºC under a “high” scenario by the end of the century. Annual precipitation is projected to increase by 45 percent in a medium scenario to 65 in a high scenario, with events involving heavy rainfall being more intense and occurring more frequently.

In a scenario where emissions are reduced after 2040, the increase is estimated to be about 6ºC degrees.

The projected temperature rise will thaw the frozen ground underpinning many buildings, roads and airports, cause more avalanches, “slushflows” and landslides, melt glaciers and threaten wildlife such as polar bears and seals that rely on sea ice to hunt, the report states.

Average temperatures in Svalbard have increased 3ºC to 5ºC since the early 1970s. Changes during mid-winter have been the most drastic, increasing 7.3°C during the past years compared to a global increase of 0.87°C. Isfjorden hasn’t been ice-covered mid-winter for the last 10 years and Longyearbyen is nearing 100 straight months of above-average temperatures.

“Winter warms four to five times as fast as summer,” said Lars Henrik Smedsrud, a professor in polar oceanography at University of Bergen and report co-author. “We have lost roughly about two months of winter on Svalbard since the 1970s. If we carry on with business as usual, we will lose two months more before 2100.”

Svalbard is warming at up to three times as fast as most of the planet, according to a “climate catastrophe” report by the United Nations released last fall.

Longyearbyen has been hit by shocking and deadly disasters attributed to climate change the past few years. A major avalanche in December of 2015 killed two people and destroyed 11 homes, and another nearby in February of 2017 destroyed two apartment buildings.

Those and other major storms resulted in experts declaring large parts of the city near mountainsides are exposed to unacceptable avalanche and landslide risks, and as a result about 250 homes and students dorms are scheduled for demolition beginning this fall. In addition, buildings in “safe” zones are facing problems due to softening permafrost that may make them uninhabitable.

“When visiting Svalbard damages like warped doors in houses is common,” said Anne Britt Sandø, a report co-author who is a scientist at the Institute of Marine Research and the Bjerknes Centre.

Among the most high-profile and costly impacts is a massive 100-million-kroner reconstruction of the entrance to the Svalbard Global Seed Vault (nearly three times as much as it cost to build the vault) due to water leakage caused because the permafrost isn’t refreezing during winters as experts predicted only a decade ago.

The impacts have also been devastating to wildlife, from polar bears rapidly losing the sea ice that is their hunting ground to reindeer unable to forage after rain turns to ice to marine species being rapidly wiped out by invaders from warmer waters.

Climate projections for ocean areas under a medium emissions scenario include an average warming of surface waters around Svalbard of about 1°C and a substantial decrease in sea ice concentration in the northern Barents Sea by 2070. But in a contrast to rising sea levels threatening to submerge a significant portion of major coastline cities, due to large land uplift and reduced gravitational pull the mean sea level around Spitsbergen will probably decrease.

The report, as with many others worldwide stating drastic and rapid action is necessary to keep severe consequences that are already inevitable from becoming far worse.

“A 10 degree warming, with the implications for Arctic nature, ice-dependent species, will be devastating,” Climate and Environment Minister Ola Elvestuen told Reuters.

“No one is doing enough” to limit greenhouse gas emissions,” Norwegian Climate and Environment Minister Ola Elvestuen told Reuters. “We have to do more…the use of oil and gas has to go down.”

But at present Elvestuen’s opinion is at odds with the actions of the Conservative-led Norwegian government, which is expanding leasing of oil parcels in the Arctic further northward in record numbers. The most recent parcels include sea right on the edge of the “Svalbard zone” within plain eyesight of Bjørnøya and the government projects waters to the sides and north of the archipelago are among the most oil-rich in the region.

A just-appointed minister in charge of Svalbard policy, Ingvil Smines Tybring-Gjedde, is a longtime oil industry advocate who argues Norway’s push for more Arctic drilling is a positive contribution to combating climate change because it has “average low emissions compared to the production in other parts of the world.”