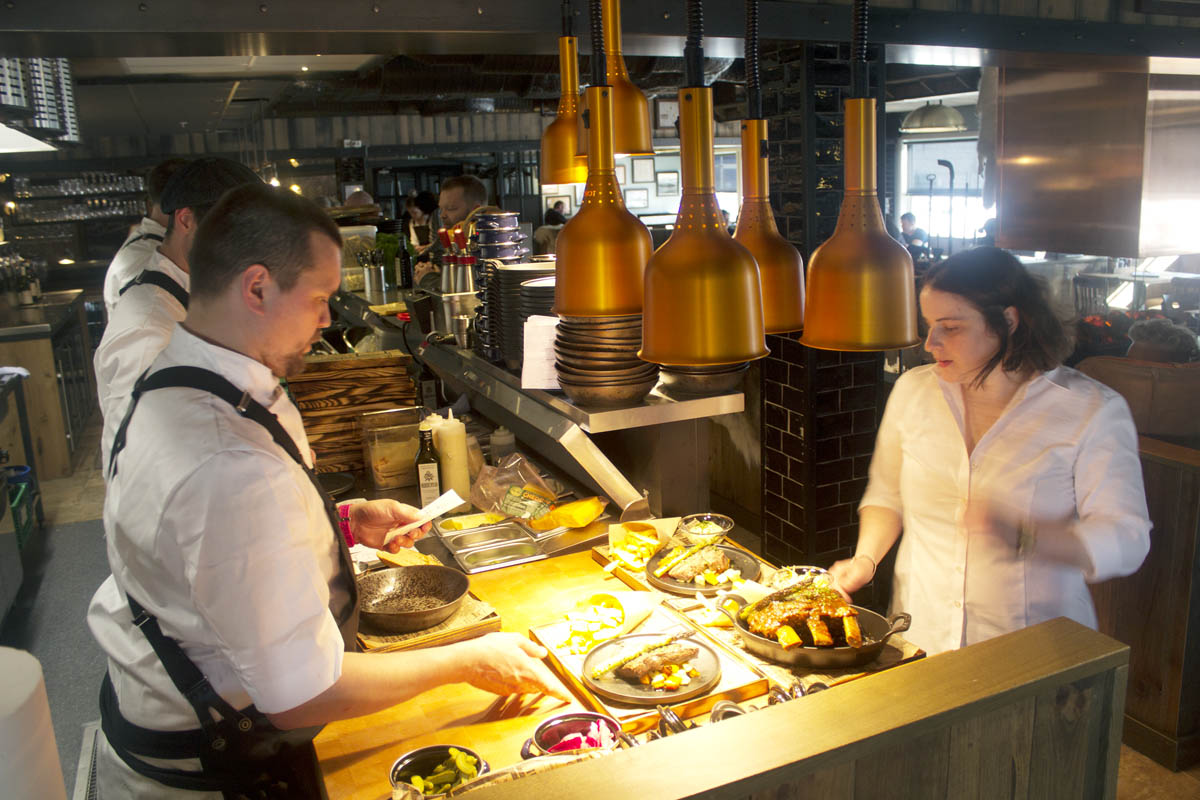 Svalbard’s newest eatery gets big rollout, menu – does it live up to locals’ hope of not being ‘just another restaurant’

It’s a historically significant space in Longyearbyen’s dining scene and longtime locals were vocal about not wanting “just another restaurant” similar to the overlapping menus of nearby comfort-food pubs. The managers eschewed a barrage of advice in favor of listening to their chefs and, while the result is arguably a menu that’s more large than unique, it’s clear locals are largely ready to fiercely defend the results.

The 125-seat Stationen in Lompensenteret debuted Friday to overwhelmingly positive comments about its food and a historic theme focusing heavily on Svalbard’s whaling era – and the stray diners offering even limited criticism online touched off a furry of responses.

The reason isn’t hard to figure out: Co-owner Steve Daldorff Torgersen is immensely popular (he also owns the adjacent Karlsberger Pub that’s another local landmark, as well as the mining-themed Gruvelageret restaurant in one of the town’s oldest structures), and one of his priorities was incorporating elements from the days when the space was a simple “miners cafe” with the modern realities involved in reaching a far more diverse and demanding crowd of local and visiting diners.

“I’m thinking it was incredibly nice to come ‘home’ to ‘Busen,'” wrote Anne Lise Sandvik, a resident of more 40 years, in a Facebook post referring to the name of the cafe that closed a decade ago. “New concept, new people, new menu, but still ‘home.’ Thank you Steve for your genuine commitment – and for your ‘drive’ – which takes care of the city’s soul.”

Among those who’s first experience at the restaurant wasn’t as stellar was Stephan Linden, an employee at Svalbard Bryggeri, who described the deep lounge chairs at two-person tables as “comfy as (expletive).” But he said the veal entrecôte he ordered was “not worth the wait,” adding “let’s blame it on the first day” and he plans to return.

That touched off a flaming discussion between those who said their experiences were “absolutely amazing,” that posting such critiques publicly was in poor taste (especially on opening night) – plus a few who either agreed with Linden’s impressions or at least defended his right to express them.

Busen closed in 2009 after some rough final years (its final chef was a fan of chill-and-reheat techniques differing little than prison kitchens), after which portions of the space were occupied by Thai and sushi eateries. When those were forced out last fall as part of a large-scale remodeling of Lompensenteret by its new owners Ampi, which owns a chain of mainland malls, some saw it as a loss for the growing groups of foreign residents the eateries represented.

But Torgersen, who said he first thought about taking over the space in 2010 with a concept similar to Busen, said he’s thankful Ampi was willing to ensure it remained under local control.

“If we had not made this place I can say for sure a chain from the mainland would be in this space now,” Torgersen said a few minutes after Stationen opened at 4 p.m.

Whether or not that prediction is accurate, by the time Torgersen formally announced his plans last fall to take over the space via a company he formed with a partner in Tromsø the vision for it had expended significantly. While plenty of locals offered advice (and a bit of inaccurate speculation), he said the final results are essentially those he first envisioned.

“I knew from the beginning what I wanted,” he said.

Torgersen said a historic theme was central from the beginning – in particular the roughly 300 years of history that occurred before the before the first issue of Svalbardposten began offering an ongoing record of happenings in 1948. That meant an era dominated by whaling, hence the new restaurant’s name.

“Not so many people know about that history of Svalbard, so I thought ‘let’s make a station,'” he said.

The historic decor – which is still not complete – exists in various forms that may or may not be immediately noticed. Arriving tourists set foot on a “seriously (expletive) expensive” compass made of historic precious metals near the entrance because, as Torgersen put it, the first thing most want to know is which way is north. Diners guided to large tables and booths with window views pass a set of whaling tools replicating those used here hundreds of years ago, along with images/texts on the walls of historic tidbits. For couples and/or those wanting to cuddle with their phones, two-tops with deep lush lounge chairs line interior sections.

As for the until-now closely guarded menu? Whale is hardly a scarce local dish, but here’s three different preparations. Ribs aren’t rare either, but a platter of three bison ribs here makes a towering impression above its porky peers (no smoke purist would take them seriously, but so it goes with anything else local claiming to be barbecue). And Manager Linda Åberg, when asked what makes the menu different than the competition, cited the burger – a seemingly baffling choice since it’s as common an item as there is.

“You have to be a little more inventive,” Åberg explained.

As for that menu, she said plenty of locals offered advice after she was named the manager.

“Everybody’s been wanting to know the menu,” she said. “We’ve been extremely secretive about it.”

How much did the input influence her? Not much.

“We have a bunch of really talented chefs,” Åberg said. “They know what they’re doing.”

Still, there are touches locals might notice that visitors overlook, including a separate menu of fixed daily Busen-like specials, and a plan to revive that cafe’s offering of a 10 percent discount to residents using their alcohol ration card.

But overall the menu, much like the setting, appears to strive for “mass appeal” in an era where there’s far fewer miners and far more tourists than a decade ago.

“It’s much more wider,” Torgersen said when asked to compared his menu to others in town. “People want to choose from more than just a few dishes.”

The restaurant opened about two weeks later than originally planned due to construction and logistics delays, although many workers and managers said they were working 16 hour days the final few weeks. Exterior work is still ongoing and expected to take another two weeks.