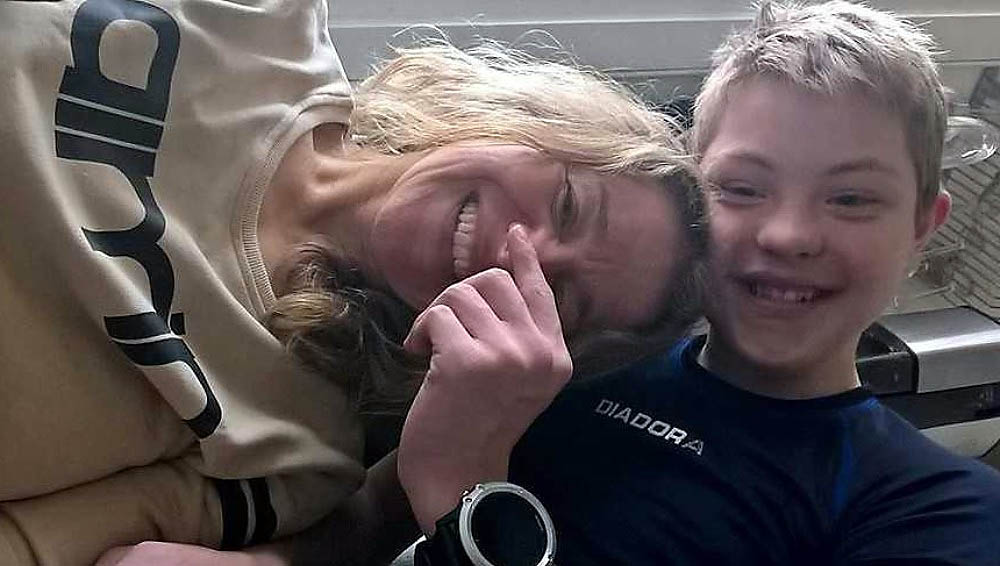 ‘How does a mom explain?’: Trym Aunevik, 16, lifelong Longyearbyen resident and champion swimmer, told he must finish school on mainland because he has Down’s Syndrome

Trym Aunevik, 16, is a national champion swimmer who a month ago proved fit enough to be one of four teens representing Norway in next year’s Special Olympic World Games. But the government has decided he is not fit to continue attending school in his lifelong hometown of Longyearbyen because he has Down’s Syndrome and the school lacks a special education program.

It’s a decision his family long knew might happen because public school resources – among other social programs – are far more limited in Svalbard than on the mainland. But for the last several years suitable arrangements have been worked out with local officials, and the hope was he could finish school where his friends and familiar teachers are.

“Yes, we may have been a little naive” wrote his mother, Tove Beate Eide, in a post on her Facebook page announcing the decision earlier this month. “How does a mom explain that Trym cannot go to school this fall?”

Media coverage of the plight occurred shortly after and in sharp contrast to when Trym made nationwide headlines in May for becoming one of 7,000 athletes from 170 countries who will take part in next year’s World Games in Abu Dhabi. He’s won three gold medals in previous national disabled swimming competitions, but this is his first trip to the global stage.

For city officials who know the family well and expressed their decision in regretful terms, the explanation is a student’s hometown on the mainland is legally responsible for the student’s education if Svalbard’s limited offerings are insufficient.

“This shows the dark side of official Svalbard policy,” Longyearbyen Mayor Arild Olsen told NRK. “And it is one of many cases where families have chosen to break up with the community in Svalbard because the offerings are insufficient.”

The impacts of a move will affect more than just a family that’s lived here for 20 years and Trym’s peers. His mother is the owner and founder of Fruene, an iconic cafe she opened in 2003 and might have to sell, while his father Terje is a highly active business leader as the chairman of the Svalbard Chamber of Commerce and Managing Director of Pole Position Logistics.

While many of Trym’s parents’ remarks to the press and on social media suggest a move to the mainland is all but inevitable this fall, Terje said “there is always hope.”

Right now that hope is seeing if school officials in the Troms district – where the family’s mainland hometown is – will agree to a work-study program through an affiliate agreement with Longyearbyen School. Trym is now working at Fruene, which his family hopes might continue during the school year.

“The main issue for us is not that he gets his formal education,” Terje said. Still, “he is still very young and could benefit from having more education.”

Terje acknowledges his son cannot operate alone and needs an assistant at school, and told Svalbardposten “what Trym ‘s siblings must hear five times, he must hear five hundred.” But Erik Ekeblad, 16, a classmate of Trym’s, said his limitations aren’t an impediment to the classroom – although he isn’t always present while getting individual help.

“There’s no slowdown when he’s there,” Ekeblad said. “He does presentations and he’s engaged with what’s going on.”

The possibility Tyrm might be forced to attend school on the mainland first arose in 2012 when Norway’s Ministry of Education decided students in Svalbard are not entitled to special education. That didn’t preclude Longyearbyen’s municipal government from working out a suitable arrangement during previous years, but now that he has completed the 10th grade city officials say Norway’s official policy for Svalbard means it’s not possible to fulfill his upper secondary school requirements.

“(The city) has no ability to make exceptions to laws and regulations that have been made applicable to Svalbard,” City Manager Hege Walør Fagertun told Svalbardposten.

But the situation exposes a conflict between Parliament’s goal of making Longyearbyen an increasingly family-oriented community while continuing to maintain it should not be a “lifelong” one (hence the well-known saying about “not being allowed to born or die” here). Terje said the situation with his son shows “we need to decide what kind of society we want to be” and some flexibility on the side of community is warranted.

“The policy should rather focus on strengthening family communities, rather than problematizing that we should not be a lifelong society,” he told NRK.

Perhaps not surprisingly, the more than 150 people responding to the Facebook post by Trym’s mom are in near-unanimous agreement.

“Longyearbyen should stand up for its own,” wrote Silje Marie Våtvik, who like Trym grew up with her family in Longyearbyen. “You who have built your lives here, become one of the few who live here all year and have become one of the true residents. It’s precisely people like you I want society to have more of.”

Other note disabled youths have been raised here and in some ways Longyearbyen’s uniqueness proved beneficial.

“We moved to Svalbard with three children in 1999, including Vilde who is a wheelchair user and was born with spina bifida,” wrote May Britt Stener Hansen. “There were probably some who thought Svalbard was not the right place for her, but today we see that the upbringing that she (and her sisters) had in Longyearbyen has helped her to be independent, open and positive to new things, has made it easier to get acquainted with new people, and to study higher education in the fall.”

If Trym does have to move he’ll have little time to say goodbye to his friends, since he will spend much of the summer on holiday with his mother and is scheduled to return just two days before the school year begins. For his parents, it would mean the end of a development for him they see as far more important than the type officials are seeking.

“The goal is not necessarily that he will be able to complete high school, but that he can continue the education that makes him ready for life as an adult,” his mother told Svalbardposten. “He can be an asset to the community.”