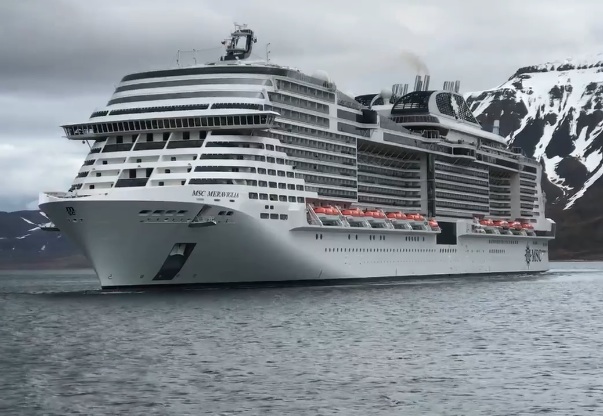 As expected, the biggest cruise ship to ever dock in Longyearbyen meant a day of big crowds, big sales and big discussions. But another big – the wind – nearly made things very small.

The MSC Meraviglia, a 316-meter-long ship with room for 6,036 passengers and crew, faced not being able to dock as it approached Longyearbyen early Saturday morning as winds reached speeds up to 57 knots, said Harbormaster Kjetil Bråten. He kept in frequent touch with the ship’s officers, but a few hours before its scheduled arrival he felt the 171,598-gross-ton ship posed too big a risk to a dock designed for much smaller vessels.

But the winds diminished enough by 7 a.m. the ship was able to tie off along the 25-year-old pier intended to accommodate vessels up to 200 meters long.

“You were lucky,” Bråten told Raffaele Pontecorvo, the ship’s captain, after coming aboard with about 20 locals for a tour of the vessel a couple of hours after it docked. “I had two thoughts: either you moored and took the pier with you or you didn’t moor. Either way I’d be blamed.”

Had the Meraviglia been unable to dock it would have had to anchor at sea and used its 150-passenger tenders to ferry people to shore. While those aboard had about 14 free hours for shore activities, the slow severely disrupted and discouraged

“It would have been a nightmare,” Bråten said later.

Concerns about bigness and limited capacity was also a concern among many businesses and others in a town where the roughly 2,000 residents were overshadowed by a total of about 8,000 visitors during the day. Store managers openly expressed concern about thefts, which have been increasing problem during recent cruise ship seasons, and an apparent lack of public toilets (despite many portable ones being placed around town), resulted in numerous complaints about visitors reliving themselves outdoors.

Part of the influx was absorbed by the coordinated efforts between ship and shore officials to prebook excursions before arrival, something local tour organizers have been focusing on the past few years. Anika Paust, an international sales manager for Hurtigruten Svalbard, said about 2,500 passengers aboard the Meraviglia pre-booked shore excursions. Museums, galleries, stores and other businesses were open extended hours to accommodate the crowds and spread their presence throughout the day.

Still, there was no avoiding the bustle of several thousand people wandering the streets and tundra, although by late afternoon most seemed to have returned to the ship. Besides the complaints about peeing in public, there were other moments of misbehavior such as tourists outside Skinnboden Arctic Products seen pushing a “do-not-touch” sign on a stuffed polar bear aside so they could – wait for it – embrace the bear while posting for photos.

Several tourists were seen posing for such shots within a few minutes, but Signe Kolborg Mørk, the store’s manager, wrote in a reply to a Facebook post mentioning the mischief that employees kept a constant watch on the bear and “today has gone very well,” and the vast majority of people encountered were “smiling, polite, nice tourists” who observed the rules.

For her and other visitor-oriented businesses, it was a lucrative day. Eva Britt Kornfeldt, manager of the Svalbard Cruise Network, estimated those aboard the ship spent three million kroner on tours, shopping, food and transport.

Furthermore, a per-visitor tax generated 673,000 for the Svalbard Environmental Protection Fund. The ship is scheduled to make two more visits this summer. 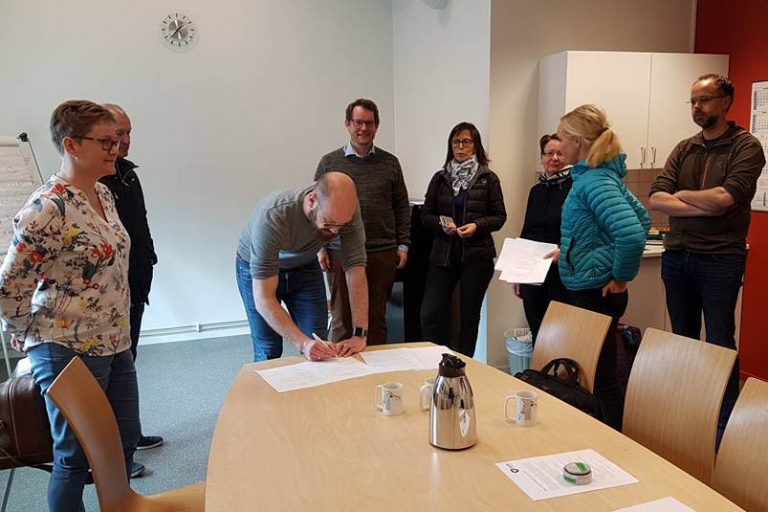 Previous post Briefs from Svalbardposten for the week of June 12, 2018