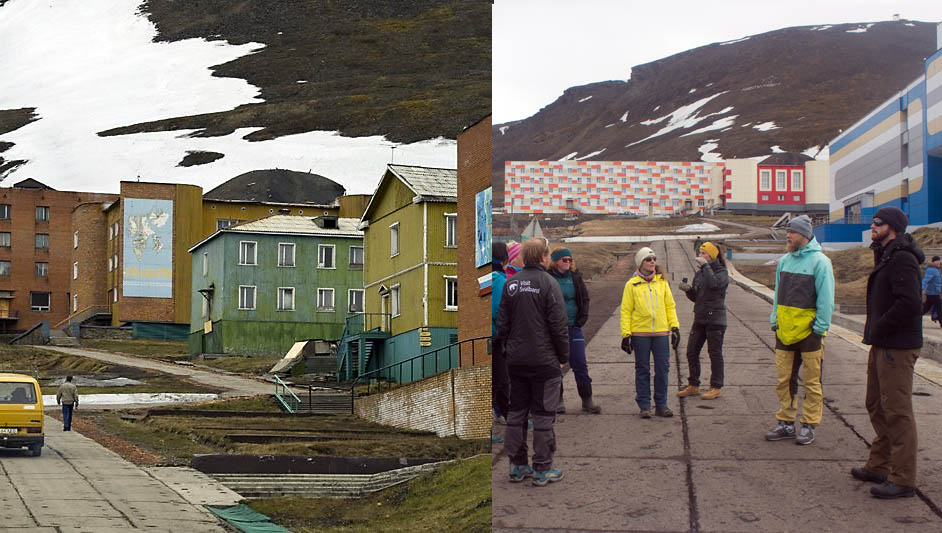 A hotel room without hot water or toilet paper (as for internet…surely you jest), buildings in full post-Cold War decay, and vodka flowing freely during breakfast before 8 a.m.

And there’s also plenty of modern shtick, including a guide’s pronouncement that “you must do” selfies with Lenin while walking through the town square, and feigned outrage about Barentsburg’s locally brewed beer being first and tastier than Longyearbyen’s better-known brewery.

What hasn’t changed since the author’s first visit nine years ago: visitors are still unlikely to encounter more than a few wary residents still laboring for low wages and living in housing largely unchanged other than the exterior coats of paint.

It’s the new face of Barentsburg which, like Longyearbyen, is hoping tourism can replace coal mining as a cornerstone industry. About 27,000 people visited in 2016, only 600 of whom were from Russia. Earnings from tourism surpassed mining during the past year and, while the shift in occupations is nowhere near as dramatic as Longyearbyen’s in the past couple of years, there are now about 100 tourism employees compared to 150 miners.

But while the Russian settlement has unquestionably become vastly most appealing and skilled in terms of mainstream tourism after nearly a decade of effort, there are still numerous improvements being sought for both visitors and residents.

Meanwhile, some are asking if the upgrades have robbed the town of the historical character that in essence made a visit a trip to the glory days of the Soviet Union possible without the need for a visa or time machine.

Tourism officials in the settlement featured a showcase of the latest upgrades while hosting a two-day trip for Longyearbyen tour guides and media (full disclosure: Icepeople participated in the “hosted” trip and therefore is perfectly fair game for accusations of favoritism…you, for instance, are unlikely to be plied with vast amounts of free vodka shots and locally brewed beer during those formal dinners).

Guides discussing the possibilities offered by the settlement’s upgrade in recent years had varying opinions in terms of how much interest their clients are likely to have. But those in Svalbard long enough to remember the “old days” no so long ago agree the difference is striking.

“It’s really different now,” said Marcel Schütz, a guide in Svalbard for the past five-and-a-half years. “In the beginning it was an old settlement and nobody took care of it. It had a lot of charm, but they have evolved the settlement and it has a different kind of charm.”

Until the past couple of years booking rooms and tours could be notoriously difficult since there were few online resources and a telephone number staffed by people who might only speak Russian.

Schütz said many of his estimated 800 customers a year come from Switzerland and at first his efforts of letting people know about options in Barentsburg consisted largely of giving them contact information.

But bookings online since last year have been possible through the Arctic Travel Company Grumant formed by Trust Arktikugol, the state-owned company responsible for managing the settlement. It is now a part of the network at Visit Svalbard, which works with cruise lines and other major companies to arrange tours.

“It is very important to get the updates to know the future and what their plans are,” Schütz said.

The settlement, for example, has just started offering walking tours of its coal mine which, unlike tours of Store Norske’s Svea and Mine 3 facilities, is a mine that remains in production. The tours aren’t for everyone since they involve up to two hours of strenuous climbing and descending, plus – since miners and tourists can’t be inside at the same time – visitors may have to get up early for a 7 a.m. tour after doing late-night shots of vodka.

“It’s a very different tour than Mine 3,” Schütz said. “It’s just interesting. The Barentsburg mine, the people earn much less. The standards are less with the mining equipment.”

Kai Müller – a German guide who called the tour more interesting than Mine 3, but less so than Svea – said he came away with definitive ideas of how to incorporate the mine into his photo tour offerings.

“I think we’re going to make a photography tour about the Russian mining,” he said, speculating it might include a tour of the settlement, the mine and the helicopter facility where coal is stored “I think that could work, especially because there’s nothing like it.”

But there’s still a key and rather obvious thing missing in terms of making Barentsburg a welcoming place for visitors, Müller said.

“For me the most disturbing thing is it’s missing life in the streets,” he said.

Even with many Longyearbyen families on the mainland this summer, the town is bustling with residents going about their daily business and kids playing in the town square (and selling coal and fossils to tourists on busy cruise days). But the streets of Barentsburg, despite its more than 400 residents, were as desolate during the guides’ two-day visit as the larger ghost town of Pyramiden, where a skeletal staff of less than ten works primarily in tourism-related jobs.

Even contact with many of those giving tours in Barentsburg is a bit awkward since many, such as a longtime miner giving the tours of his workplace, speak only Russian and therefore are narrated by an interpreter. One Barentsburg guide acknowledged the new infusion of tourists is a jolt for many locals who likely are staying inside.

“It’s something they are still getting used to,” he said.

But there are some peeks at everyday life not avaiable to visitors in years past. The grocery store with its stock of classic Russian goods is open to visitors, with rock-bottom prices for many staple items such as grains. In a new crafts center where classes are occasionally offered a local woman was engaged in a sewing project oblivious to visitors.

One problem the settlement faces as it tries to continue its upgrades is money. Russia provided $28 million in state subsides in 2009, but only $8 million in 2017.

“We are rich, but our government is so greedy,” said Timofey Rogozhin, the settlement’s tourism director, speaking through a translator during a tour for the guides. “So we are going to do everything without them.”