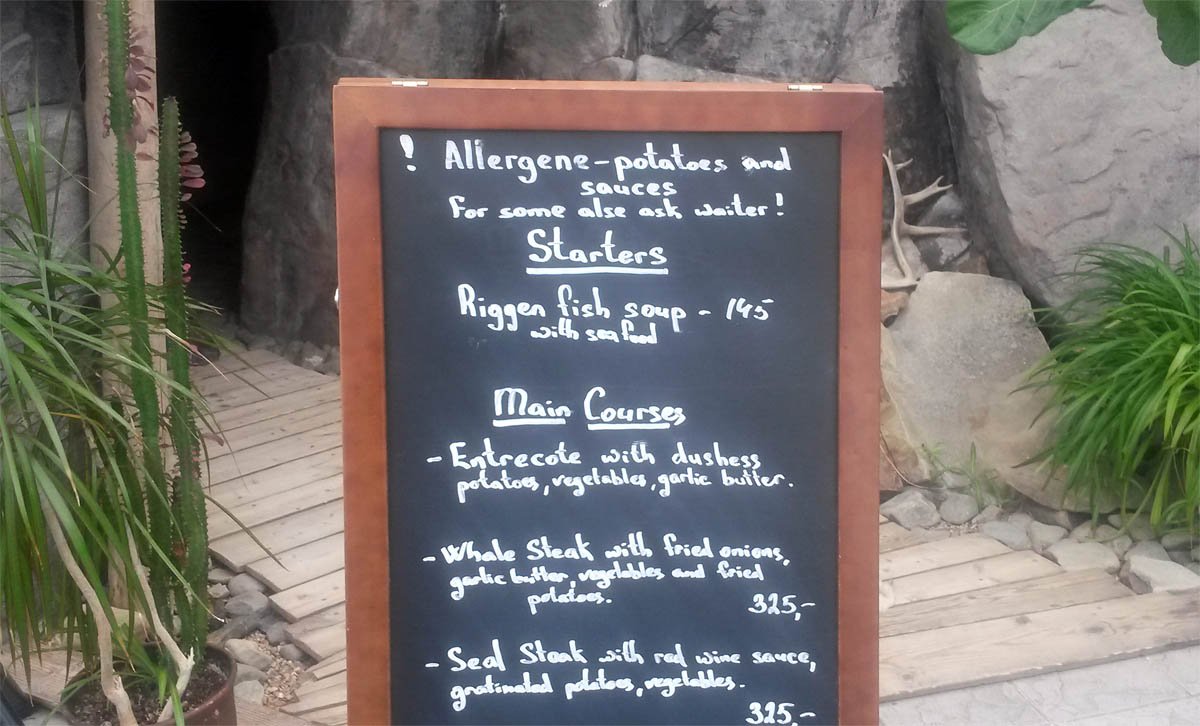 Isn’t that special? Nearly all of Longyearbyen’s eateries/shops adjust to increasing demand for various diets and allergens

Svalbard’s concept of a “special diet” historically meant staples such as whale and reindeer meat, and even in the modern day the archipelago is exempt from allergen labeling requirements that exist in the rest of Norway. But with Longyearbyen shifting in recent years from a mining-dominated town to a more diverse one where tourism and research is increasing, so are the requests from those with special diets and efforts by restaurants and stores to accommodate them.

Which means modern day explorers – whether going on marathon trips, doing an actual marathon or just making the marathon trip here to chill – have far more options when it comes to buying groceries and dining out compared to a few years ago. Longyearbyen’s lone supermarket now has entire sections dedicated to special needs diets, and virtually every eatery is voluntarily making an effort to provide vegetarian (and increasingly vegan), gluten-free, dairy-free dishes – or at least notify diners which items contain allergens.

“It’s a positive thing,” said Tove Eide, owner of Fruene since 2003, noting the cafe has seen an notable increase of customers with special diet requests during the past three to four years. “It helps us think more creatively. It means we also are thinking more about nutrition and what’s good for the environment.”

As is the case pretty much anywhere, advance notice of special requests are helpful so both the diner and chef know what to expect. Unlike many other places, Longyearbyen’s remote location means certain items may not be available due to shipping or other disruptions. With that in mind, here’s what to expect at the town’s various food stores and eateries:

The selection of special diet foods has expanded vastly in recently years to accommodate most needs for both staples and convenience products such as frozen foods, with such items generally grouped in their own sections. The main caveat – which applies to all of the supermarket’s items – is inconsistent availability is more noticeable here when shortages occur (there was, for example, a notably shortage of pasta during the Svalbard Skimaraton in April). The store also offers a hot deli and items that appear to meet obvious dietary needs are probably safe, although it’s best to ask if in doubt.

This convenience store has also expanded its food selection in recent years to the point where enough staples, canned goods, seasonings, etc. can be found make something to accommodate most diets. The options might not be numerous, but because the store is open until 10 p.m. nightly it’s a handy option when Svalbardbutikken is closed.

For budget-minded folks looking to add some zing to the always-cheap staples of rice or noodles, this store in the shopping complex across from the Radisson is worthy recommendation due to the novel selection and competitive prices without the high-season lines of Svalbardbutkken. Longyearbyen’s large Thai population means the selection of starches, proteins, produce and snacks at this small shop is highly authentic and diverse enough to meet most special diet needs.

Perhaps the most diverse and overlooked option for those looking for hot or cold prepared foods for everything from a fancy pre-race meal to a day-long hike, this company in the same complex as the Thai shop offers a broad range of dishes, à la carte items and food packages for any number of persons. Menus are at the kitchen’s website (svalbardcatering.no), but since they don’t list allergens people should inquire when placing orders.

Many of Longyearbyen’s restaurants are operated by the two largest tourism companies in town – Hurtigruten Svalbard and Svalbard Adventure Group – and both currently offer menus with special diets and allergies in mind, although offerings can be limited to a single dish, if that, depending upon a person’s dietary restrictions. Other eateries, most of them independent, also are increasingly offering special diet items and in general say they prepare items such as vegetarian/vegan foods separately from others to avoid cross-contamination.

All menus (except the chalkboard menu at Rabalder) note which items contain ingredients with the 14 allergens that are required to be disclosed in mainland Norway. The restaurants are generally willing to customize dishes to accommodate special needs when possible. Diners will likely find one or two options for most special diets, but menu updates and specials means accepting what’s on the plate that evening. A beet burger offered a few months ago at Coal Miner’s, for instance, was nowhere to be found a month before the race. Rabalder’s menu changes daily and usually includes a vegetarian option.

While not detailing all applicable special diet qualifiers for each menu item, the menu notes vegetarian items and also states diners should consult with servers about allergies (an employee at Huset said they are familiar with all 14 categories). As with the above restaurants, special needs options are limited. Huset’s bistro, for example, contains a single vegetarian risotto entry (and no appetizers) and those with special diets should contact the formal restaurant in advance about its fixed-course menu.

This restaurant operated by Basecamp Spitsbergen, popular as a “something for everyone” hangout, details specific allergens in each dish, although as with other places it might mean accepting a single acceptable choice (a recent menu offered lentil stew as the long vegetarian option, for instance). But daily specials and customization (leaving the the taco meat off nachos, for example, might offer more variety).

This restaurant, which opened in 2015 in a historic mining warehouse at Sverdrupbyen, serves formal multi-course meals (a recent menu includes preparations of scampi, cod, pigeon and cake with accompanying sides and optional wine parings). Allergens are noted on the menu, but the restaurant asks those with special diet needs to provide advance notice.

Several vegetarian sandwiches are on the regular menu at this cafe, and vegetarian pizza and other dishes are often among the daily specials. Vegan offerings include a tomato pesto sandwich on the cafe’s white bread (the whole-grain bread has eggs), soy milk coffee drinks, and homemade vegan chocolates with a vanilla and berry filling.

With a meat-dominant menu that generally includes whale and seal – not to mention all the pelts on display and the famous Peisen Bar where the owner collection of local wildlife penis bones are used as swizzle sticks – this might not be the first choice of the vegetarian/vegan crowd. But the chalkboard menu does list allergens and the kitchen is generally able to accommodate special requests.

A Taste of Thai

Offers three vegetarian Thai dishes (including one vegan) cooked in a separate wok from other dishes, plus a vegetarian pizza.

Vegetarian and vegan sushi options are available (as are instant miso packets for those craving it). The restaurant operated entirely by Japanese employees also offers gluten-free deep-fried chicken wings.

(Editor’s note: A condensed version of the article previously appeared in the Spitsbergen Marathon’s official magazine.)