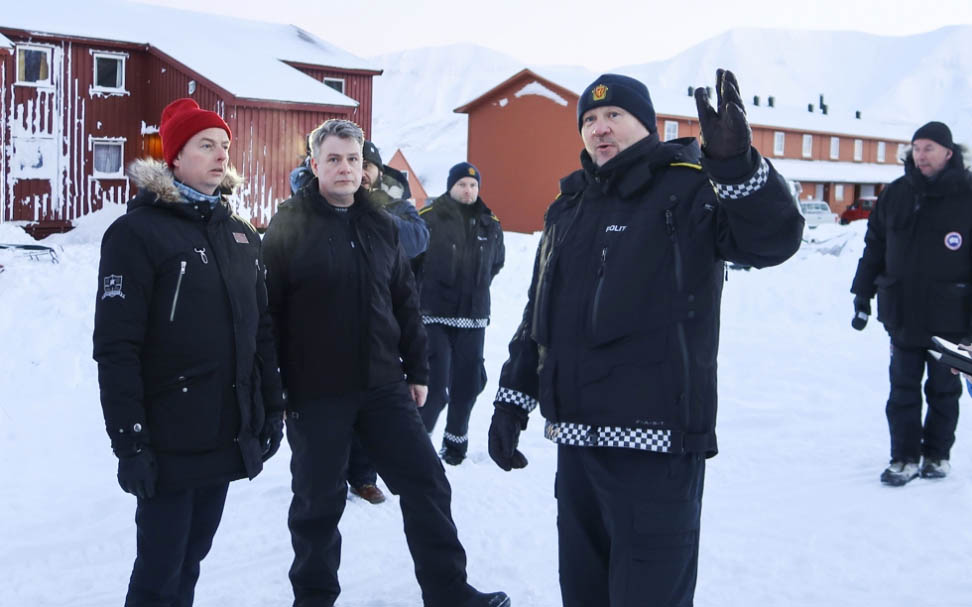 Guess who’s in the house? Workers aren’t sure where they can live after latest avalanches redefines ‘community in transition’

Eighteen months ago there were scary headlines about Longyearbyen losing 30 percent of its population and panicky questions about who would fill all those empty homes where laid off coal miners recently lived.

Now the panic is how to squeeze a non-declining population into a suddenly alarming shortage of housing being sold and rented at skyrocketing prices.

The new reality can logically be attributed to less than a minute of activity during those 18 months – two avalanches that destroyed or forced the abandonment of about 100 residences and killed two people.

But an ongoing series of related and unrelated events are contributing in a community-in-transition profile it seems safe to say nobody could have foreseen. Among those are a loss of confidence in the government’s ability to protect people and homes, a sharp increase in tourism employees who’ve largely replaced the laid-off miners, and an unexpected recovery in coal prices that may allow large-scale mining to resume.

On the upside, the solution is essentially the same: lots of money spent on major projects as quickly as possible. Only now the priority is housing rather than infrastructure and and industries. Also, the desired timeline is much shorter.

“The level of ambition is that we should already be starting this summer here so we can go into a new winter with greater security for buildings,” said Norwegian Minister of Oil and Energy Terje Søviknes during a visit to Longyearbyen several days after the most recent avalanche. “In the longer term is considering the permanent depopulation of some of the buildings and speeding up new residential construction in Longyearbyen.”

Longyearbyen Mayor Arild Olsen said he agrees the homes evacuated indefinitely after most recent avalanche on Feb. 21 should have some kind of barrier protection by next winter. But he joined his colleagues on the Longyearbyen Community Council who shortly after the avalanche unanimously voted against allowing city employees to ever occupy the buildings again.

“I think the best thing we can do is arrange new housing not in red zones,” he said.

Longyearbyen needs about 20 new homes built as quickly as possible to house city and other employees at official agencies, said Bente Næverdal, property manager for Statsbygg, in an interview with NRK. The Longyearbyen Community Council sent a letter last month to the Norwegian Ministry of Justice and Public Security, which has administrative oversight of the archipelago, stating 55 million kroner is needed to build those homes.

An additional 10 to 20 homes will be needed to house all such employees, Næverdal said. The Norwegian Consumer Council and Norwegian Health Network, for example, have put plans to establish offices in Longyearbyen on hold until the shortage is resolved.

While local leaders are urging the need for immediate action, Søviknes and Minister of Justice and Public Security Per-Willy Amundsen were non-committal about specific pledges during their visit other than to state it will be part of the normal budget debate this spring. Amundsen said he didn’t expect the ministers to show up with a suitcase of cash – or promise to provide it immediately – but the visit was still a promising sign.

“What I did notice is two ministers took the time to arrange their calendar and come to Longyearbyen,” he said.

The housing shortage is also posing dilemmas for private businesses and renters since, even if they can find vacant residences, many owners are seeking much higher rates. Erling Ormseth, who bought half of a duplex apartment last August for 1.95 million kroner, told Svalbardposten last week he’s advertising it for sale for 2.8 million because it’s a comparable to the town’s current per-square-meter rate.

Aleksei Frolof, who with his wife was forced to abandon his apartment after the recent avalanche, told the newspaper he’s staying at a friend’s place until he returns from the mainland, but is uncertain what the next move is.

“We have been offered an apartment that is significantly smaller than the one we had and that costs significantly more,”Frolof said. “It feels a bit unfair.”

The housing lost in Longyearbyen during the past year-and-a-half includes:

• 16 apartments when Gamle Sykehuset was condemned due to structural damage in February of 2016.

• 12 apartments when two complexes were destroyed by an avalanche Feb. 21 of this year.

• 55 residences evacuated indefinitely after the most recent avalanche due to fears of avalanche exposure.

The latter could theoretically be occupied again if snow barriers or similar protection was installed, but many residents are expressing reluctance to do so after experts errantly predicted snow conditions just before the February avalanche did not pose a threat to settlements.

“It is difficult to bring confidence back into the population after two such slides in two years,” said Knut Aune Hoseth, acting regional manager of Norwegian Water Resources and Energy Directorate, during a “National Avalanche Conference” last week in Tromsø.

Those losses don’t reflect several buildings in Nybyen that are also in “red zones,” according to a report released by the directorate late last year. Most are used to to house students at The University Centre in Svalbard, but the school is planning to relocate the students to new dorms adjacent to campus. Gjestehuset 102 is also in the red zone – barely – and Managing Director Karl-Eric Melander  has expressed a strong preference for a barrier to protect the lodge instead of relocating.

Longyearbyen’s housing market has always been tight, with virtually everyone living in residences arranged by their employer. But the situation appeared to be slackening in the fall of 2014 due to the construction of residences more family-oriented than the traditional miners’ housing and the onset of a coal price crisis that triggered massive layoffs at Store Norke and related companies. Some officials and media reports speculated that Longyearbyen’s population of about 2,100 in 2014 could drop to as low as 1,600 when the layoffs were complete.

But the city’s population remains at roughly the same level – and well within historical variances in recent years – due to 1) a significant increase in tourism employment as many companies are reporting record traffic, 2) a major boost in government grants and subsidiaries various entities, 3) a strong construction industry primed for quick growth, and 4) the actual loss of mining-related employees was a fraction of the total layoffs since many of them were “shift” workers who commuted to the mainland during their weeks off.

The mining crisis sparked an effort to launch and expand business and academic activity in Longyearbyen, which has seen results ranging from new small businesses (a call center, extreme-weather pain testing company and premium bottled glacier water company among them) to potentially major new industries (most notably seafood processing). Those efforts didn’t stave off putting the town into a technical economic depression – the new jobs generating much less gross economic output than the old ones – but a post.-mining path forward was developing.

But what was unthinkable recently may be happening again as an unexpected rebound in coal prices has Store Norske putting together a plan to resume its main operations next year. That won’t necessarily add significantly to Longyearbyen’s housing crunch since the mines are well away from the town, but many workers need short-term housing in transit.