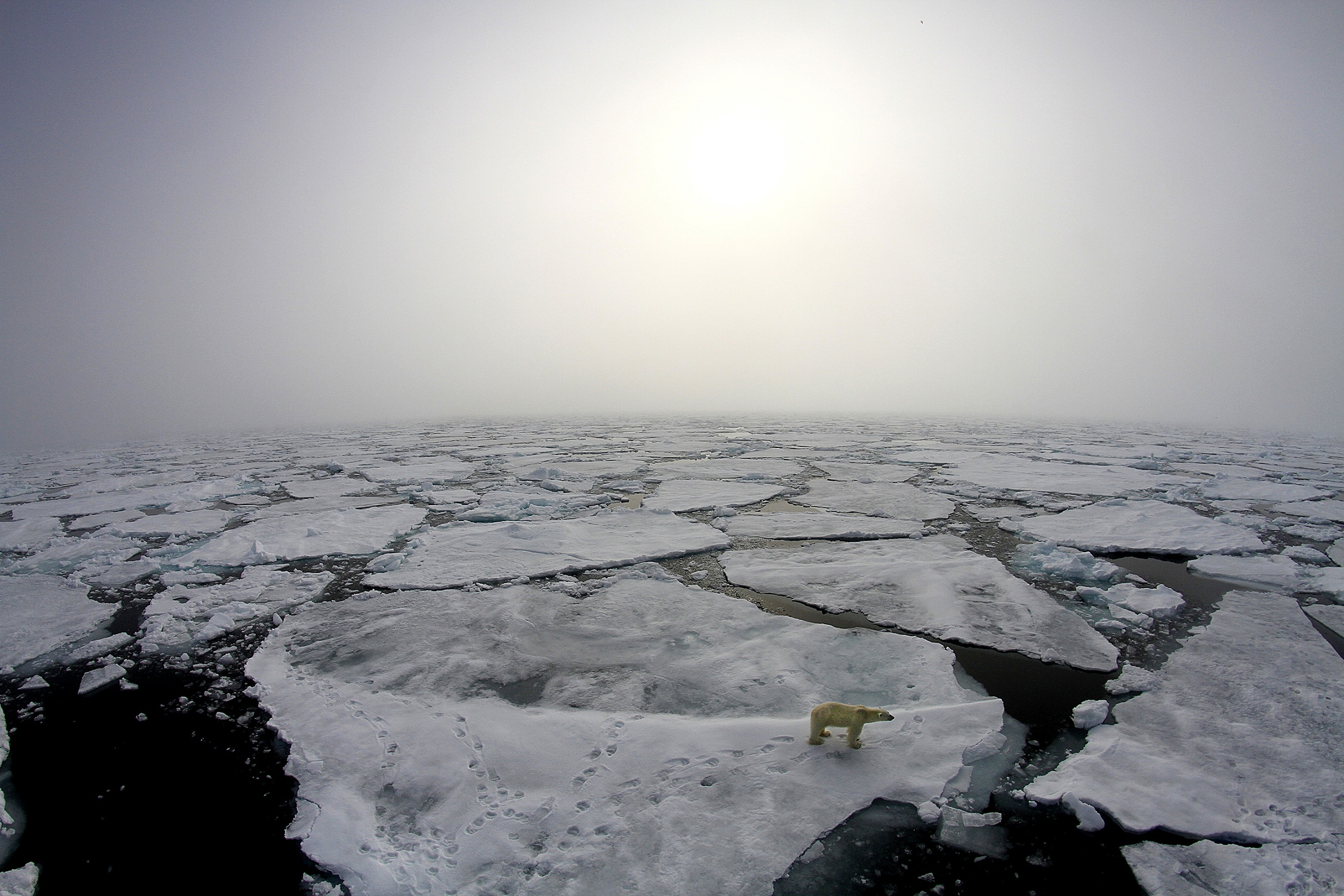 Drilling for oil in our backyard is good for the environment. Climate change is rich with blessings. Building up rival militaries is essential as we enter a new era of cooperation.

Those aren’t “alternative facts,” as such. Just the alternative way of thinking from politicians, scientists, business leaders and others pondering the future of Svalbard and other Arctic areas during the days immediately surrounding the inauguration of U.S. President Donald Trump. While his name wasn’t necessarily brought up often during conferences and other events – indeed, the administration’s presence at them was minimal – the aura of uncertainty from the election and other tumultuous events during the past year lingered heavily.

The official tone from most leaders remains upbeat about everything from climate change to economics to military conflicts, even if the so-called experts are considerably more pessimistic in their analysis.

But the range of world views are at times bizarre in their extremes. At one end Al Gore and other climate change activists are talking about achievements like the Paris climate treaty and the need for even further action as if the events of 2016 never happened. Last year’s Brexit vote in the U.K. threw the future of numerous international climate research projects into doubt. Trump during his first week has announced it plans to reject the Paris treaty, has erased the White House web pages referring to climate change, and largely frozen all environmental funding and communications – suggesting the long-term impacts could be far more profound than Brexit.

At the other end are those freaking about the likelihood of nuclear holocaust if  Trump faces a crisis that had far more level-headed leaders pondering Armageddon (yes, Svalbard gets a mention due to a rocket launched near the archipelago to study the Northern Lights in 1995 that set off a panic in Russia).

While such topics made for interesting debate, this year’s Arctic Frontiers conference was “one of the least significant Arctic conferences during the past few years,” but not because Norway’s Ministry of Foreign Affairs or other organizers are at fault, High North News Editor Arne Holm wrote. More ominously, it’s because developments in Russia and the U.S. – especially Trump’s victory – significantly reduced the importance of the conference’s discussions and goals (as one key official interviewed stated, “the Arctic risks drowning in global big politics”).

According to Holm, the only U.S. official participating in the discussions – Chair of the Arctic Council and Ambassador of the Arctic David Balton – said “I don’t know. I don’t think anyone really knows” when asked what Trump hopes to achieve in the Arctic.

However, some analysts have noted in recent weeks Trump’s designated secretary of state, ExxonMobil CEO Rex Tillerson, has an aggressive interest in the Arctic, including signing joint ventures with Russian oil companies to look for oil in the Russian Arctic that were put in hold due to sanctions imposed due to the Ukraine crisis. There has been widespread speculation Trump may be willing to lift this sanctions.

Russia, like the U.S., had a scant presence at the gatherings and was similarly silent about its ambitions, even though the country has made no secret for years about its grand ambitions of expanding its military and industrial presence in the far north. Among its areas of heavy expansion in terms of troops and infrastructure are Franz Josef Land to the east of Svalbard and the area north of Svalbard near the North Pole. The U.S., meanwhile, landed 300 Marine troops in Norway this month for a six-month deployment, reviving Cold War fears since it is the first such deployment since World War II. And Norway is “is making a conscious effort to enhance its stockpile of munitions, fuel and spare parts ahead of any potential conflict in the region,” according to a report by Defense News after a media tour of the Bodø Air Station where such activity is occurring.

In any event, Norway appears to be a willing partner with both countries for such activities – to some degree at least – especially if Norwegian Prime Minister Erna Solberg and her ruling coalition maintain power after this fall’s election.

A major cooperative effort to expand existing commercial fishing in Svalbard while adding new elements such as fish processing plants was among the areas of agreement by representatives of Norway and Russia during the conference. Also, while Norway is among the Western countries that has imposed sanctions on Russia due to its annexation of part of the Ukraine – which has touched off noteworthy political feuds in Svalbard the past two years – the area may benefit if Trump leads the way in lifting those sanctions since, among other exports, 10 percent of the country’s salmon market was lost when the sanctions were implemented.

In addition, both countries recently agreed to a pact allowing each to conduct seismic tests along their entire maritime border in the Barents Sea, which extends far north of the archipelago. Solberg repeated her position that, due to advanced Norwegian technology, drilling for oil in the Arctic may have fewer environmental and climate impacts than drilling that causes higher amounts of pollution in the Middle East.

Nina Jensen of WWF expressed opposition to such plans, echoing opinions by many environmentalists that such activities are not compatible with either sustainable management of ocean resources or Norway’s climate goals.
“Solberg maintains a faith and a vision that Norway can continue to be a dominant oil and gas player in the Arcitc,” Jensen said. “That’s at odds with the other message about protecting our most vulnerable areas.”

A push for local feedback was made by former Longyearbyen Mayor Christin Kristoffersen, now a leader with the consulting organization Arctic Advocacy Group, arguing there needs to be a balance between seizing industry opportunities when available and the impact on local populations.

“Should governments allow oil drilling or not?” she said “That’s a difficult question, but it’s really not the right question. The question ought to be, what do the people it affects directly want. If they want it, national governments need to accept that.”

Economics were the main source of discussion during the World Economic Forum in Davos, Switzerland, earlier this month. Winther of the Norwegian Polar Institute and other officials from northern Norway hosted the side event “Arctic Base Camp Davos 2017” focusing on the global impacts of climate change in the Arctic and possible solutions.

“An interesting discussion panel that I chaired centered on environmentally friendly, green shipping,” he wrote in a column posted at the institute’s official website. “Can we use the Arctic to develop green solutions?”

Commercial shipping through via various Arctic routes, including near and with possible port stops in Svalbard, is seen as a potentially booming industry during the coming decades as the sea ice disappears. Such voyages are already increasing and progressing further north, and Winther stated measures such as an international Polar Code that took effect this year imposing struck safety and pollution regulations can be a model for future agreements.

“The private sector argued (during the seminar) that they hold the key to the transition to a low-carbon society,” he wrote. “More and more people are realizing that green solutions can create a strong economy.”

A more blunt assessment delivered at the conference by Christiana Figueres, executive secretary of the U.N. Framework Convention on Climate Change, who helped broker the Paris climate treaty and now wants even more aggressive action.

““There are no jobs, no business opportunities and no profits to be made on a dead planet,” she said.

But such arguments clearly aren’t winning over the Trump administration, which replaced Obama’s climate change web page with one describing the “America First Energy Plan:”

“President Trump is committed to eliminating harmful and unnecessary policies such as the Climate Action Plan and the Waters of the U.S. rule. Lifting these restrictions will greatly help American workers, increasing wages by more than $30 billion over the next 7 years.”