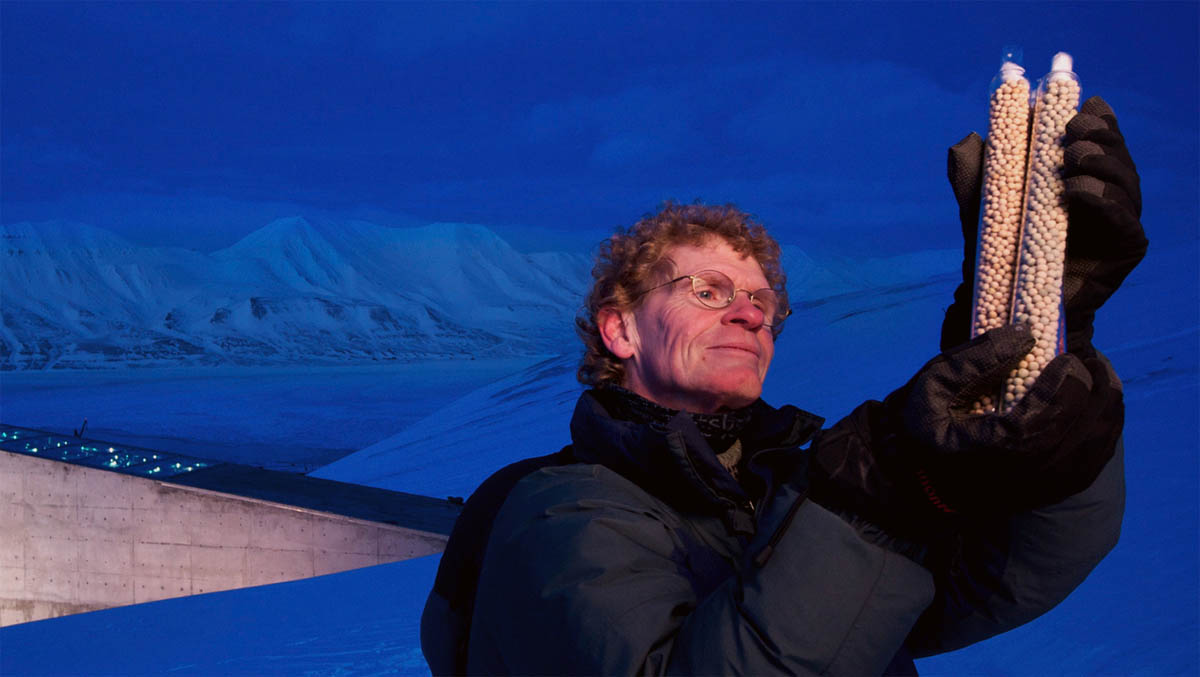 Seedy story: Review: ‘Seeds on Ice’ gets global raves – but does it reveal the ‘Doomsday Vault’s’ true secrets?

Nobody’s ever peed inside the Svalbard Global Seed Vault, which is a bit surprising given all the media/VIP tours and the fact there’s a chemical toilet in there. Then again, it’s not like a lot of normal human functions are happening in what staffers adamantly refuse to call the Doomsday Vault.

The “new Noah’s Ark” inside a Svalbard mountain – where zombies, aliens and mad scientist supervillains roam, if various video game and conspiracy scenarios are to be believed – is going through one of its biggest moments of fame right now with the release of the book “Seeds On Ice: Svalbard and the Global Seed Vault” by vault founder Cary Fowler. The 161-page hardback, hailed as much for its photos by longtime Longyearbyen resident Mari Terfe as Fowler’s narrative, has been the “featured book of the week” in major publications such as the Washington Post and the Los Angeles Times, the latter calling it “a cross between a coffeetable title and a TED talk.”

“(Seeds on Ice) opens the door not only to the Vault, but to a process that shows Norwegian leadership and international cooperation at its best,” according to a review by High North News, arguably the most intelligent newspaper cover the Arctic. “Beautifully accompanied by photographers Mari Tefre and Jim Richardson’s northern images, this book is a tribute to the Seed Vault, its unique history, and the nature and people of Svalbard. Read this book, and you will know why this is the most important bank vault of all.”

But is the reverence justified?

As a journalist on Svalbard for eight years, I’ve toured the vault with Cary several times and read more articles about his work there than I care to count. He indeed tells a captivating tale about seeds, the perilous future they face and the vault’s critical role in preserving Earth’s future food supply. And, yet, some immensely inaccurate factual claims in the section about Svalbard that take up the first half of the book (in itself a decision open to debate), I’m haunted about what other factual claims regarding seeds and the vault might be faulty. If nothing else, he’s certainly opened himself up to attack from skeptics (some of whom regard him as evil incarnate) who will be able to cite his inaccuracies.

Just to name a few examples: “some years, bears come into Longyearbyen several dozen times” and “everyone who lives in Svalbard has a polar bear story” (if I recall, one in three people here have actually seen a polar bear and far fewer have “stories” involving anything more than a glimpse of them). And he’s way off on some basics such as when the polar night occurs.

All this is buried in a narrative about Svalbard that takes up the first 75 pages of the book without mentioning the seeds or the vault. Good call or bad call? I can see the arguments in favor – notably it will appeal to a broader audience seeking a general book about Svalbard – but I also get uncomfortable reading passages about aspects of a supposed modern life here that no longer exist (i.e. a hotel offering polar bear on the menu after one was shot; as far as I know, that’s no longer a thing for many years, the least he could do it mention that). But all in all, it’s a decent summary – and the real highlight is Terfe’s photos, although they aren’t any better or worse than any other coffeetable book about Svalbard.

It’s the latter part of the book, divided into sections on seeds and the vault, where Fowler separates himself from the countless other photo-heavy books about the archipelago. And the question for those wondering whether to fork over 250 kroner (plus shipping) on Amazon comes down to a very simple question: is the subject of interest to you?

If the answer is yes, Fowler is unquestionably one of the world’s foremost authorities on the subject and his eight years of leading tours in the vault and giving interviews about it has given him definitely skills as a storyteller (which I’ve seen evolve over time as he’s dealt with all kinds of moronic questions and requests with infinite patience, including walking into the vault repeatedly so cameras could get the “right” shot and nonsense busywork such as carrying boxes of seeds to-and-fro).

His narrative about seeds and the vault is a mixture of passion, science boiled down to layman’s terms and witty stories I’m sure he’s told during numberous media tours (a bizarre example of comparing seeds to backyards overflowing with dogs when explaining how many seed species there are being being no mean example). While I lament his devoting almost half the book to Svalbard rather than the vault, I can’t think of anything about the latter that is overlooked.

The second part of the book is essentially an academic lecture about seeds and the evolving role they’re playing in an era of climate change. He notes the enormous dilemmas many countries are facing as there will be a need for far more food to feed the global population and a declining ability to do so on lands now considered fertile. It is, in all honesty depressing reading since past actions don’t suggest politicians in those regions will act quickly enough to respond to the needs, but he builds a convincing case for why facilties like the Svalbard seed vault are necessary when the effects of human failings are felt on a large scale.

The third section is all about the vault, detailing the efforts to build it and what has happened since it opened. Even for those familiar with the vault, there are a lot of tales that will inform and entertain (i.e. the no-pee history). He notes, for example, “airlines might lose luggage on a regular basis but, remarkably, 2,291 boxes have been shipped to the Seed Vault thus far and 2,291 have been received.” And, in one of my favorite passages, he notes the moment the vault essentially transitioned from thought to reality:

“I was ushered in to see Olav Kjørven, a tall and surprisingly young man considering that he was state secretary for international development at the Ministry of Foreign Affairs. The walls of his office were charmingly decorated with the drawings of his young children. I had a half hour to present the findings of our feasibility study. He listened intently, but silently, and I couldn’t read his body language. I had no idea whether he liked the plan or thought it was nuts. Finally he leaned across the table and said:

‘Let me get this straight. You’re saying these seeds are the most important natural resource on earth?’

‘And you’re saying that Svalbard is the best place in the world to conserve them?’

Then with a shrug of his shoulders and upturned palms he replied, ‘Well, then how can we say no?'”

Furthermore, Fowler excels at explaining the dilemma the world’s seeds are facing due to conflict and climate change, and – to a lesser degree –  addresses the concerns of skeptics about the vault. His book is unlikely to win the latter over, but for those looking for something different and more substantial than the usual picture book fodder of this lace, this certainly ranks in the top-tier options along with recent titles such as “The Ice is Melting” (a series of essays about climate change) and “Seeds of War” (OK, a sorta tongue-in-cheek option involving a highly-regarded paperback thriller about the supposedly dark side of the vault) depending on where your interests lay.

2 thoughts on “Seedy story: Review: ‘Seeds on Ice’ gets global raves – but does it reveal the ‘Doomsday Vault’s’ true secrets?”