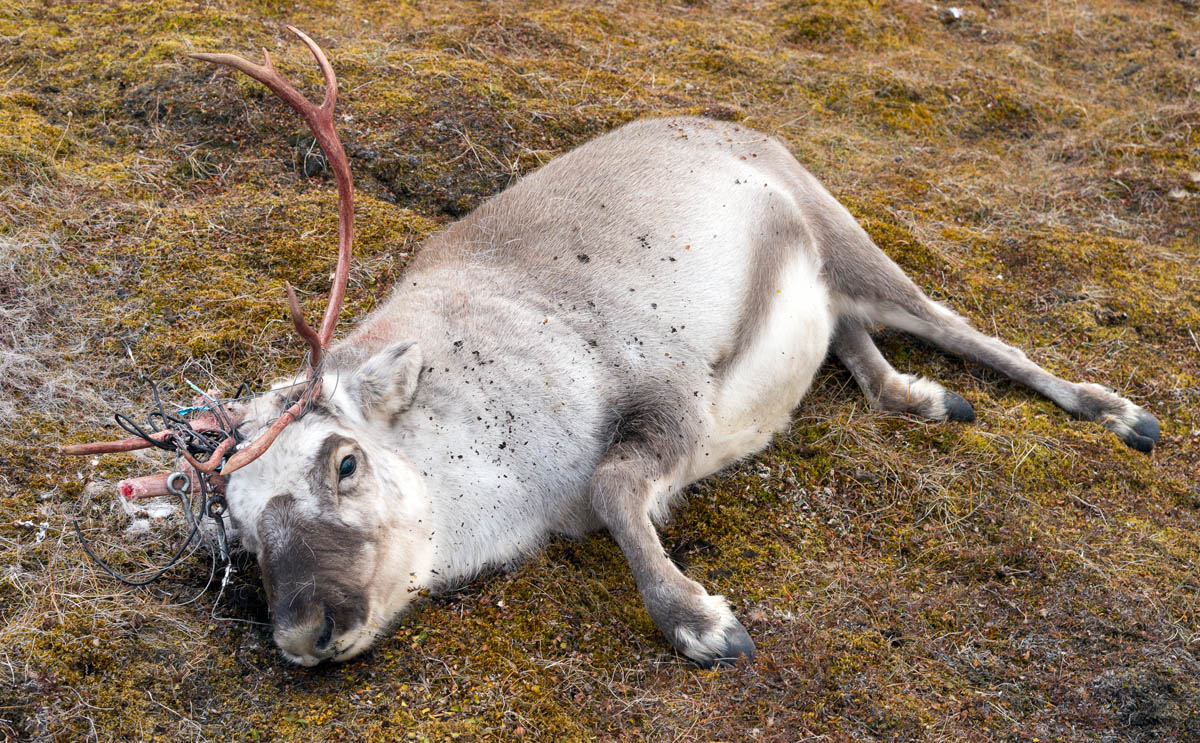 I’m driving into Adventdalen for one of my many enjoyable photo tours on a Tuesday afternoon. The weather is fine and I’m hoping to find the reindeer that lives below Mine 7, as I have done many times in recent days.

This is a column by guest contributor Dag Halvirsen. Like it? Donate!

Right where the ascent towards Mine 7 starts, I catch sight of a reindeer crossing the road at full speed. It looks like it’s running from something and looking a little anxious. Shortly thereafter, I catch sight of another buck which stops up for my car, as if waiting to get going across the road and run after the first deer. I retrieve my telephoto lens and take a closer look.

I realize immediately that something is wrong. Around its antlers are steel wires and cables, and a rope-bolt is dangling near an eye.

I continue observing for a few minutes to see if it really stuck and is in distress, or something has randomly hooked on and will soon fall off again. After a few minutes the panic begins to spread in the reindeer and it starts away at a torrential pace. It is very stressed, and running and jumping with its tongue hanging and threw out of his mouth. I now understand that this is serious. Nothing temporary. The animal is seriously troubled and struggling to get rid of the dangerous metal scraps.

I call the governor’s office, which thanks me for the tip and immediately sends out a crew. Meanwhile, the beast is rushing and back and forth, and will obviously cross the road. I run back and forth as well to keep the animal on the left side of the road so it will not go away after the first reindeer before the crew from the governor’s office arrives and assesses the situation.

After a short time, one of the governor’s vehicles shows up with three men who seem to be well-trained and well-equipped for the task. The reindeer has calmed down a little, standing and looking lethargic beyond the marsh. Via a powerful telephoto lens, pictures are taken and sent to the governor’s environmental manager. The crew assesses the situation very closely and considers several options.

The animal is a danger to itself and other reindeer, as it is now caught in what we see is a solid mix of wire and cables tight over the skull, with heavy bolts hanging down on both sides.

A sharpshooter approaches with a rifle. The animal is standing there exhausted and the advice received is that it need to be shot. It falls quickly and the drama is suddenly over.

I stand next to the dead body and think that this is both sad and tragic, and could have gone even worse if another animal had become snagged with the first. I realize that the whole incident was completely unnecessary and could easily have been avoided. A healthy, well-fed and protected animal had to be put to death because a few people do not understand how stupid and dangerous it is to leave litter behind.

I think back on fantastic boat trips around Svalbard, where we picked up several dozen kilograms of hazardous debris from fishing vessels that emerged on land and posed a serious threat to, among other animals, polar bears. Officials working for the governor confirm this is a major problem for fauna on Svalbard. It is also a paradox that one must organize garbage pickups every year in the middle of what should be a clean, Arctic oasis in the Barents Sea.

I turn and travel homewards towards the city. The photo tour and scenic adventure is over for now. It did not go quite as expected, to put it mildly. I sincerely hope that all who work, research and otherwise explore the nature here have second thoughts before they throw away junk, and realize that litter can be deadly. 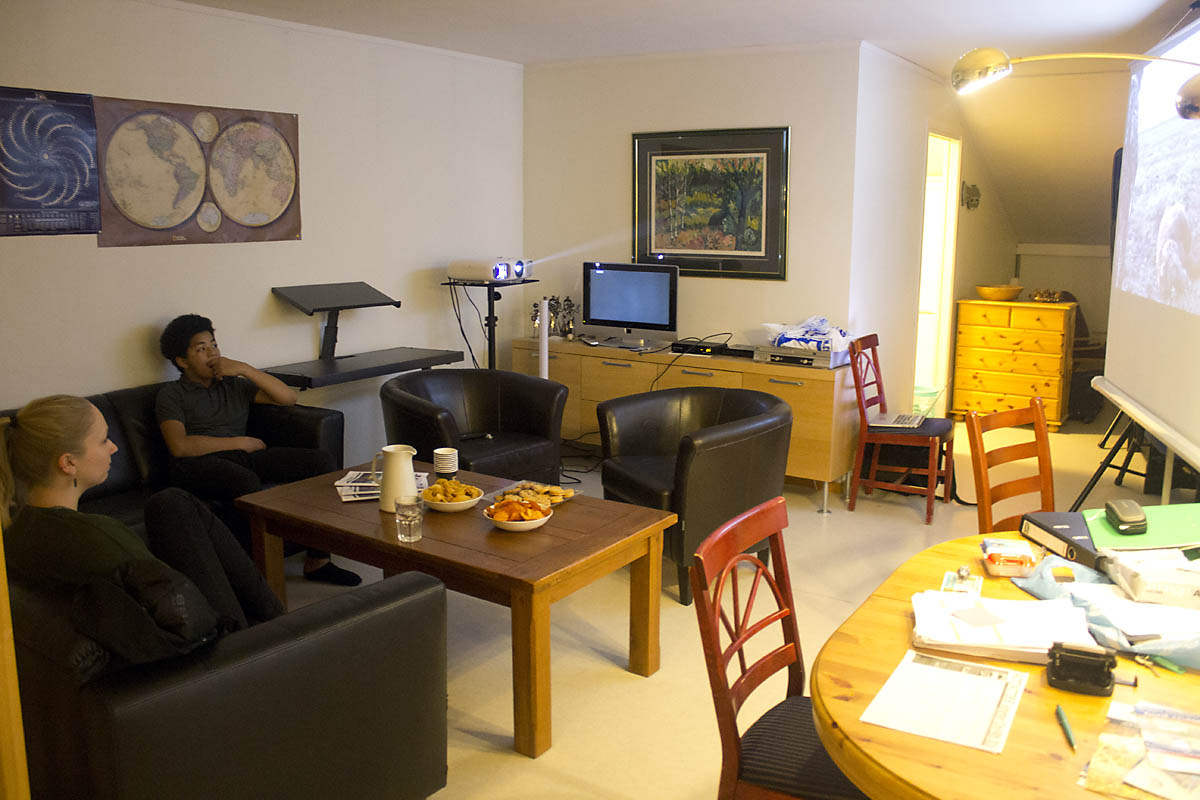 Previous post Liveblog: ‘Svalbard: Life on the Edge,’ Episode Three (‘Out of Darkness’) at Polar Permaculture 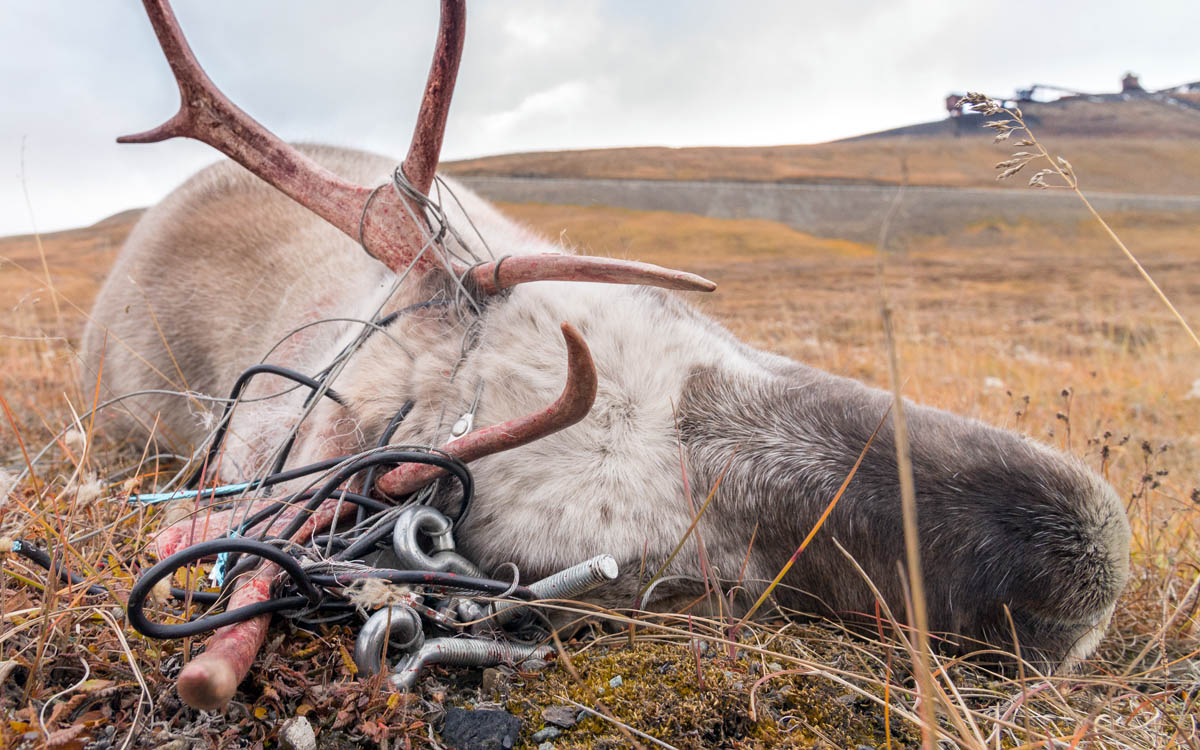 Next post Land and sea sick: Four more reindeer pay ultimate price for garbage; how much are we willing to pay so they don’t have to?