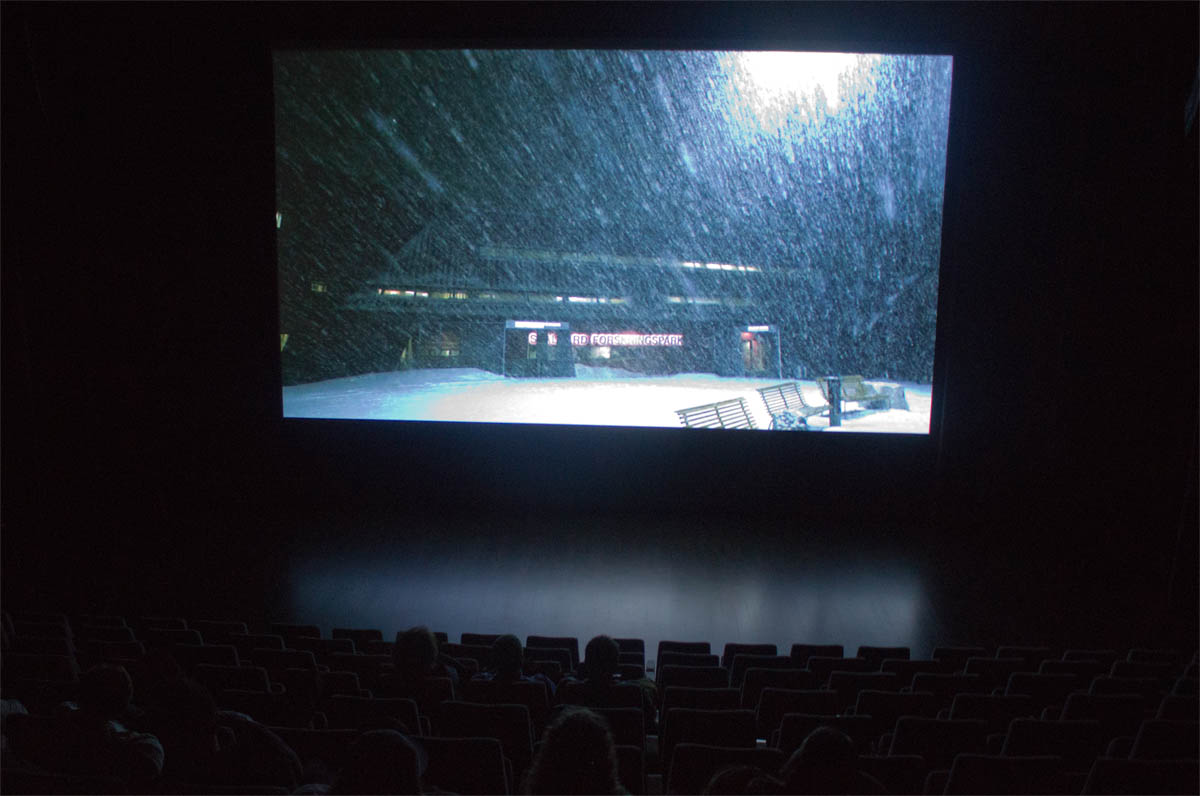 (Editor’s note: this was written in real-time as the debut episode aired at a preview screening, then updated to fix inaccuracies and add essential details after viewing a recording of the show several times. Future liveblogs will follow a similar path.)

2:52 p.m.: Kulturhuset is nearly full for the advance screening of the debut episode, which airs in Norway at 10 p.m. Monday on BBC Earth. Those who don’t want specific details of the show revealed should read my previous cast-only liveblog of the first two episodes.

3:04 p.m.: Wendy Rattey, executive producer of the series, addresses a packed house with cues written on the back of her plane ticket. “We showed it to the people involved last night. They all really enjoyed it so that was a massive relief.” This is mostly true – those reading my recaps from last night know I thought there were scattered meh and WTF moments, but nothing I envisioned in a worst-case scenario. Some of the other “characters” also said they’re reserving judgement until the third episode, which will be largely about last year’s avalanche that destroyed 11 homes and killed two people.

3:06 p.m.: Wendy: “Mostly we wanted to say a massive, massive thanks to all of you. We have several film crews here for seven, eight months. We tried to be discreet, but that’s not always possible when you’re carrying tons of equipment…we hope we’ve done this town that you call home some justice.”

3:07 p.m.: Opens with Alex Pilditch, SvalSat employee and tour guide from Britain, laying on the ground with a rifle talking about “the day you leave town without a rifle will be the day you meet the bear.” Mary-Ann Dahle, owner of Mary-Ann’s Polarrigg, cuts up seal meat and shows off a polar bear penis, Christine and Grace Ireland are dog sledding, and then there’s lots of scnenic shots of the usual wildlife/mountain stuff that grow increasingly dark (in the abaence of light sense). Quick thunp and blank out, then the titke screen. Title: “Ice Town: Life on the Edge,” (the one used in the rest of the world). So far, it very much projects a “real-life Fortitude,” in very good and very bad ways.

3:09 p.m.: Narrator talks about Longyearbyen being home to 2,000 hearty souls as Grace (that’s a nickname, BTW – his real first name is Graham) chops frozen fish with a hatchet for one of his dogs. His wife, Christine, is introduced as well. Their first scene together involves trying to get an old car with poor tires unstuck.

3:11 p.m.: Narrator quotes an outdated figure saying Svalbard has 3,000 polar bears (a census last year found far fewer), paving the way for Christine and Grace to do some rifle training. Christine: “This isn’t the typical thing I’d be doing on a Saturday” in her homeland of the UK. She’s something less than a heroic Arctic sharpshooter. “I kept closing my eyes when firing. That was really not the right thing to do.”

3:13 p.m.: Mary-Ann gets intro as owner of a lodge that’s “for people looking for something a bit…different.” She’s wearing her polar bear skin coat (with the head attached as a hood).

3:15 p.m.: We get a tour of the lodge with lots of polar bears. And then there’s the bar with the polar bear penis (and a fox and other animals). Name of the bar translates to “Penis Pub.”

3:18 p.m.: Mary-Ann shows off a new luxury room, designed with someone in mind: “I want Bruce Springsteen to come for at least one week. Bruce Springsteen is very sexy. He used to be sexy…I have a dream. Come to Svalbard.”

3:18 p.m.: Alex gets his intro in his role as a guide. He’s teaching guests the basics of driving snowmobiles. Takes them “50 kilometers into desolate terroitory on the east coast,” according to the narrator. Kinda sorta…compared to the outside world, yup, but during March and April the route is one of our “snowmobile superhighways” due to all the traffic.

3:20 p.m.: Alex talks about dangers of glacier crevasses while riding and the need not to wander. “There’s only two reasons you can get off. One, I tell you to. Two, your snowmobile is on fire.”

3:21: He talks about encountering polar bears: Good for guests, but a pain for him because he has to change his plans and route to avoid disturbing the bears.

3:22 p.m.: Back to Mary-Ann, who is cutting up reindeer for a big birthday party dinner. Narrator notes Svalbard cuisine is “polarizing,” with seal, whale, etc. “What is the difference between a whale and pork?” Mary-Ann asks, noting both are animals people kill for food.

3:24 p.m.: Back to Alex and his group taking a pee break and his musing how awkward shedding all that clothing is. Then it’s time for bags of freeze-dried meals for lunch.

3:27 p.m.: Back to Mary-Ann rushing around the kitchen and serving the birthday party guests.

3:28 p.m.: Narrator notes citizens from 42 countries can live here. One of them is “an ex-L.A. Times crime reporter.” Yup, I’m up, with cool jazz for background music. It shows me photocopying and stapling fishwrappers while I talk in an annoying, overly nasal voice.

3:31 p.m.: Me at Fruene, which I tend to use as an office a lot. Staple a few more issues, then “I get to play the role of paperboy.” Me at various dropoff spots…walking between then I mention my broken hip and there are lots of shots of me walking awkwardly.

3:32 p.m.: Me trying to get my snowmobile gong for the first time of the season. Battery’s dead, so I’m still bumbling about on foot.

3:34 p.m.: Christine talks about desire to move a long ways from town and live in the wilderness, which is why they spend lots of time working with dogs.

3:34 p.m.: They’re putting the harnesses on dogs. Christine laughs a bit as dog licks her. “They eat poo you know.” Names of dogs includes Texas and Penis.

3:36 p.m.: They take turns driving and riding a sled. Fun go-pro camera angle from the front of the sled looking back.

3:37 p.m.: Grace has to hop off sled to stop two dogs fighting. They start up again with nice snowscape, twilight and half moon shots. “We have a good life here. Sometime you have to pinch yourself and say, like, shit.” Narrator: “Speaking of” as the couple is forced to shovel up frozen chunks of dog doo.

3:59 p.m.: Feeding time for dogs at kennels. Obviously the couple of the focal point of this episode, with Mary-Ann getting plenty of airtime.

3:40 p.m.: Me again struggling to speak Norwegian. I get my first laugh from the crowd (at me, not with me). Arranging to get snowmobile battery charged.

3:41 p.m.: Me surfing the web at Kulturhuset cafe for story ideas. Nothing very exciting. Although I do mention a crime blotter item about somebody sawing tusks off a walrus in Ny-Ålesund. “How do you get away with that. It’s not like something you can just hide in your carry-on bag.”

3:43 p.m.: Talk about their affection and dependence on each other, and how that will be crucial when they move off the grid.

3:44: p.m.: Snowy, windy day and I’m commuting to work on my repaired snowmobile. Covering hotel opening next day – although it looks like there’s far too much work to be ready. I talk about weird stuff in L.A. like crime, jail breaks, etc. and my dislike of pack journalism in a big city. “To me a small town is a lot more fun to write in a lot of ways…because it’s more hands-on.”

3:47 p.m.: Alex finally returns doing target practice. Narrator: While many residents use a WWII-type rifle, but “Alex has a high-tech rifle and he likes to use it as often as possible.” Very serious thumping music as background. Echoing Mary-Ann, Alex notes “If you eat meat and you complaint about hunting you don’t have a clue.” He looks at target and finds results “very concerning.” Keeps working at it.

3:50 p.m.: Reminded yet again of polar bear danger – but in this instance there’s one a mile from town. The show plays this up as high drama, even if the locals basically treat it as a bit of a diversion, with some minor concern among those who know someone out on the trail. I’m covering it as a news story and talking about how there was not much ice during the winter and bears wander into new areas looking for food, including settlements. Great camera work by crew showing the bear being chased and tranquilized by officials in a helicopter.

3:53 p.m: Me talking about why I’m a journalist: “I’d much rather live in other people’s worlds than mine. In Svalbard we live in a a strange world where reality is often stranger than anything that can be invented, so every time I do a story it’s reminder of why I’m here.”

3:55 p.m.: And that’s a wrap for episode one. I’ll clean up the typos and fill in some missing details shortly. And stay tuned for a liveblog of episode two at 9:30 p.m. tonight.