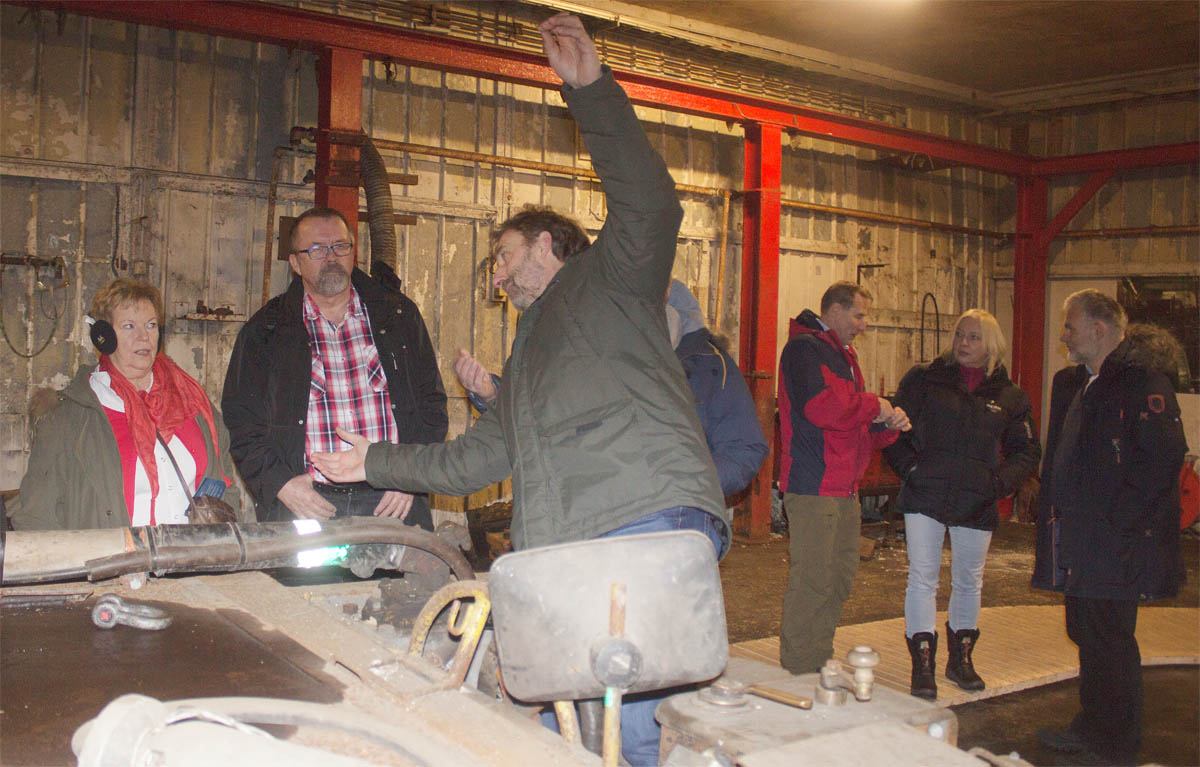 Old-time tough: Reunion of post-WWII residents relives a rough and roguish era with lots of laughs and sorrow

To an ordinary tourist it’s a rusting mine cart with an odd driver’s “seat” at the rear. But for Terje Nūbdal, 59, it marks the spot where a colleague was killed in an accident 34 years ago.

“The driver was standing and he fell out and was killed,” Nūbdal said while exploring his former workplace inside Mine 3 on Saturday with about 40 other former and current Longyearbyen residents participating in a weekend reunion. “He was on the switching track and thought it was going to go one way, but it went the other way.”

Nūbdal and about five others were among the many subgroups exploring the mine and reliving memories, humorous and tragic, without the presence of guides who began offering tightly-controlled tours of the mine that ceased operations in 1996. The result was a multi-generational reliving of Svalbard’s work and societal history dating back to at least the end of World War II far beyond what any normal tourist will ever get to experience.

One anonymous “featured” spot, for example, is a short and drab dead-end tunnel leading to a door that keeps visitors from venturing into the depths of the mine. For Nūbdal and his group, a bit of icy rock just before the door is where one of the most painful of many fatal incidents occurred.

“He had only 50 meters to go,” said Turid Telebond, Nūbdal’s sister-in-law and a current Longyearbyen resident who works for the municipal government. “There was a fire and he went in to rescue someone he thought was in there.”

Fortunately, the person in question was no longer in the tunnel where the fire was, but his would-be rescuer died before he could make it back to safety. The small group remembering his death Saturday went beyond the obvious talk about his persona and courage, discussing things like the person assigned to investigate the case and how Store Norske handled the incident.

But Nūbdal – who worked in Mine 3, Mine 7 and at Svea from 1978 to 1998 – said Longyearbyen’s old days are full of fatal incidents deep inside the mountains.

“One man every year,” he said, noting they were killed by everything from equipment mishaps to falling stones to collapsing parts of the mine’s construction.

When asked he worked for 21 years at a job where he saw so many colleagues killed, Nūbdal simply replied “I liked it.”

And the stories of camaraderie, odd incidents and often roguish behavior meant there were far more laughs than painful memories inside the mine and during the reunion weekend.

Anne Lise Sandvik, one of the reunion’s organizers, kept her fellow old-timers entertained in the break room of the mine by reliving stories from when the old mining men were rather uncouth toward the young women in town in words and mannerisms. Among the stories she shared later included a time when she was working as a waitress during the 1970s and got back at one of the men by giving him a nosebleed.

“It was one of the miners who suddenly put his hands under my skirt and I was carrying a tray,” she said. “I put down the tray and I used all of my force to slap him. Then I turned and saw blood was running.”

Sandvik said she helped organize the reunion, attended by about 50 people who overwintered at least once before the year 2000, because a lot of people on a “Gamle Svalbard” Facebook were interested on it.

“We have a a large group of 5,000 members, but luckily only 50 of them came,” she said, noting things might have gotten a bit crowded in Longyearbyen’s relatively few free rooms. “I know that very many more people who have liked to come, but we sent out the invitation very late.”

The group met for their first dinner Friday night at Stormessa (now known as Coal Miner’s Cabin, but none of them called it that). Beyond a couple more group dinners Saturday and Sunday, and a screening at Kulturhuset just before the mine tour of the 2011 “Polar Eufori” music/video profile Longyearbyen, the reunion was informal.

Various folks clustered at pubs and cafes, and wandered around the city taking in the enormous changes that have occurred since they’ve been here. On the bus ride to the museum they took photos of clusters of reindeer below the Svalbard Global Seed Vault like any other tourists and laughed appreciatively as the bus driver gave his standard tourist shtick about things like the purpose of the decaying mining cable car along to the road to the coal pier.

There were, as might be expected, mixed feelings about Longyearbyen now compared to Longyearbyen many years ago.

Albrigtsen’s father worked for Store Norske for decades beginning around 1946, but the rest of the family moved to the mainland because Longyearbyen only offered seven years of public schooling in those days. As a result, Albrigtsen and his three brothers only saw their dad at Christmas and during summer holidays.

Those and other limitations had some admitting that, nostalgia aside, it’s a good thing Longyearbyen has moved into the modern era.

“You couldn’t just pick up the phone” to call the mainland, Telebond said. “You had to order it.”

That would be followed by a wait of several hours while arrangements and connections were made. On the other hand, it was possible and relatively easy to send telegrams.

“I don’t think anyone would want to go back, actually,” Telebond said. “You tend to keep the good memories.”

Telebond who also helped organize the reunion, said she knew about one-third of the people who came, but many other names were familiar.

One thing there was little disagreement about was a sadness that Svalbard’s mining days are largely over, as the company that was once the lifeblood of the reunion participants is getting rid of most of its operations and dismissing all but a sskeletal staff.

“The coal is the most clean coal you can get,” Albrigtsen said. “The brown coal in Poland, they should stop that first.”

He said he’s encouraged to see an attempt to boost other industries as mining declines and believes “the society will grow further.” But he isn’t yet conceding Svalbard’s mining days may be nearing an end.

“Maybe the Russians or Chinese will step in,” he said.