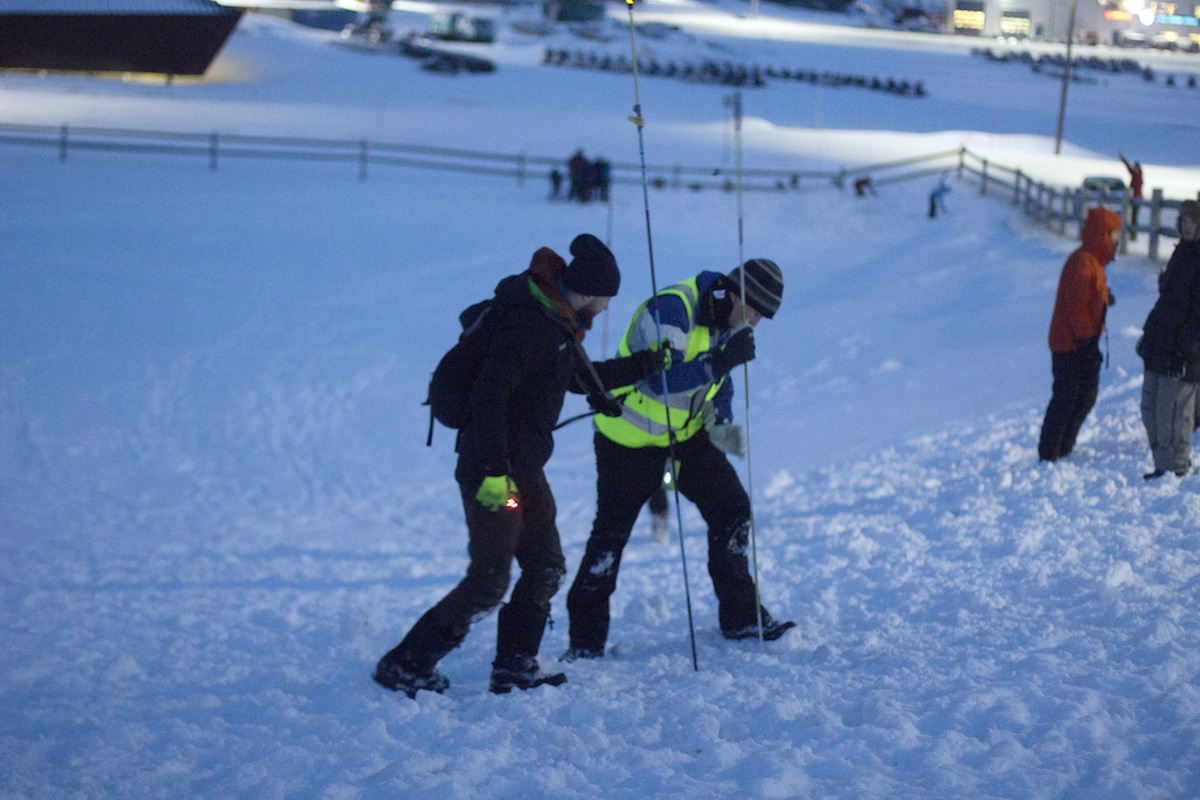 There’s not likely to be any laughter or casual chatter if they’re doing it for real in the future, but hopefully the habits they learned on a calm day with calm conditions will stick with them if another worst-case scenario hits.

“You probe here, here, here and here,” said Patrick Kunzet, a volunteer helping supervise an avalanche search exercise Saturday, indicating a small square of snow. “Then you work your way out.”

A scattering of participants spread out looking for avalanche transceivers buried in a large field across the street from The University Centre in Svalbard. Following the beeps and blinking lights of the transceivers they were carrying, they poked and prodded small sections intensely, digging down at times hoping to discover the hidden devices that meant prizes for those finding them.

Pavel Glukhenkiy, one of the searchers, said he hasn’t had to use avalanche rescue equipment before, but it only took about ten minutes to find the first of multiple beacons.

“It’s not that hard; you just have to follow your equipment,” he said. “It’s good to have a course with the equipment, but it’s not a proper avalanche course.”

The relatively smooth, slightly sloped surface was indeed a far cry from the chaotic mass of snow lumps, shattered glass, splintered wood planks and other debris from the Dec. 19 avalanche – not to mention the nine people buried somewhere under the wreckage. But organizers of the “treasure hunt” and a series of presentation about avalanche safety the night before at Kulturhuset said it’s a first step toward establishing a formal avalanche training program if there is enough interest.

Plus, it turns out there was an unexpected complication during Saturday’s hunt.

“We realize in retrospect that we probably had beacons buried too close to the nearby power lines, which seemed to be causing some interference with all of the beacons,” a message by Longyearbyen Avalanche Awareness, a community group formed after December’s fatal event, stated on its Facebook page. “If you were discouraged with confusing or erratic signals from your beacon, we encourage you to practice first with a single buried beacon in a location well away from any sources of interference (and remember that your cell phone and headlamp can interfere with beacons as well!).”

Another discussion hosted by the group about safety and possible training courses is scheduled Feb. 22 at Barents Pub. A separate meeting hosted by The Governor of Svalbard and other local leaders to discuss the recently enacted local avalanche warning system is scheduled at 7 p.m. Feb. 10 at Kulturhuset.

A capacity crowd of about 200 people attended Friday’s presentations. Chris Borstad, an associate professor at UNIS whose speciality is snow and ice physics, told the audience that – unlike the Dec. 19 snowslide – “90 percent of avalanche victims worldwide triggered the avalanche themselves or had it triggered by somebody who was in their group.”

“As the light is starting to come back and people are starting to get out more it’s a good time to be practicing with your friends,” he said. “If you’re caught in an avalanche without a beacon it’s like being finding a needle in haystack.”

That’s especially true in Svalbard, even though rescuers here are among the best-trained in the world, because many searches occur far from settlements.

He said during level four and five conditions – the most risky – “we just stay home.” But only one percent of all avalanche fatalities occur in level five conditions and 12 percent at level four, compared to 47 percent in level three and 34 percent in level two.”It’s in the middle of the scale, so a lot of people think it’s still OK to go out, and if you don’t have a lot of knowledge you can get into danger,” he said.

In addition to assessing snow conditions, weather and other factors, proper precautions while traveling are critical, said Wesley Farnsworth, a PhD candidate at UNIS specializing in glacier and ice cap research. Among the slides he showed was two skiers close together beneath an avalanche that had just been triggered by a third skier above them,

“If we’re putting ourselves in risky terrain we want to make sure we do it one person at a time so there’s somebody there to rescue you,” he said. 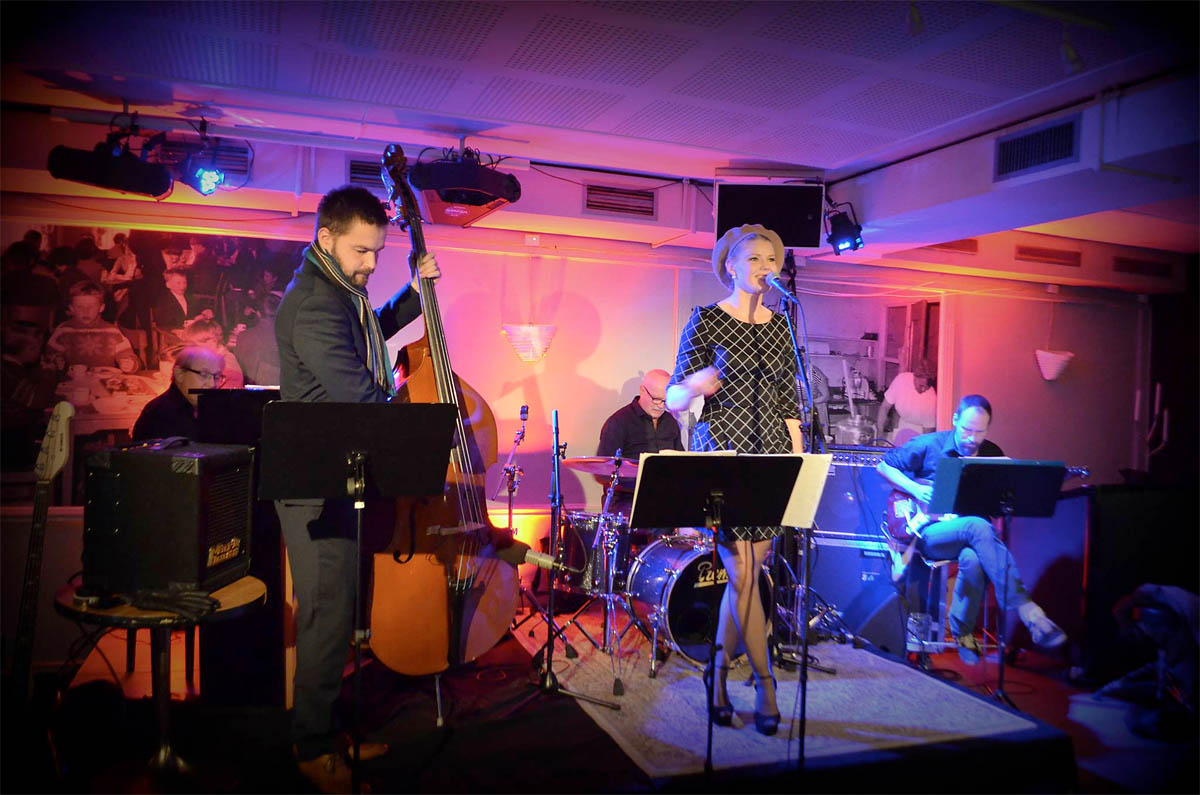 Previous post Defining moments: Polarjazz not bringing in many namesake musicians, but locals will provide plenty of cool vibes 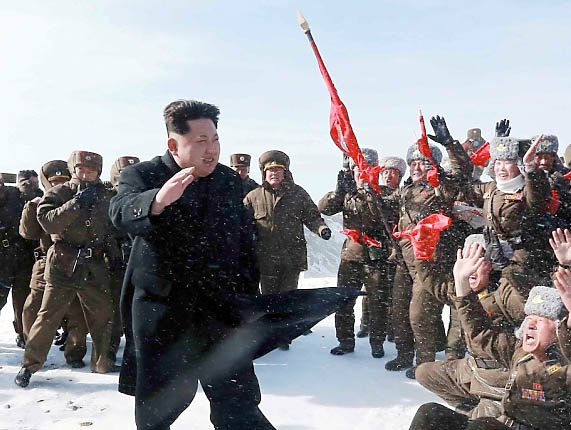