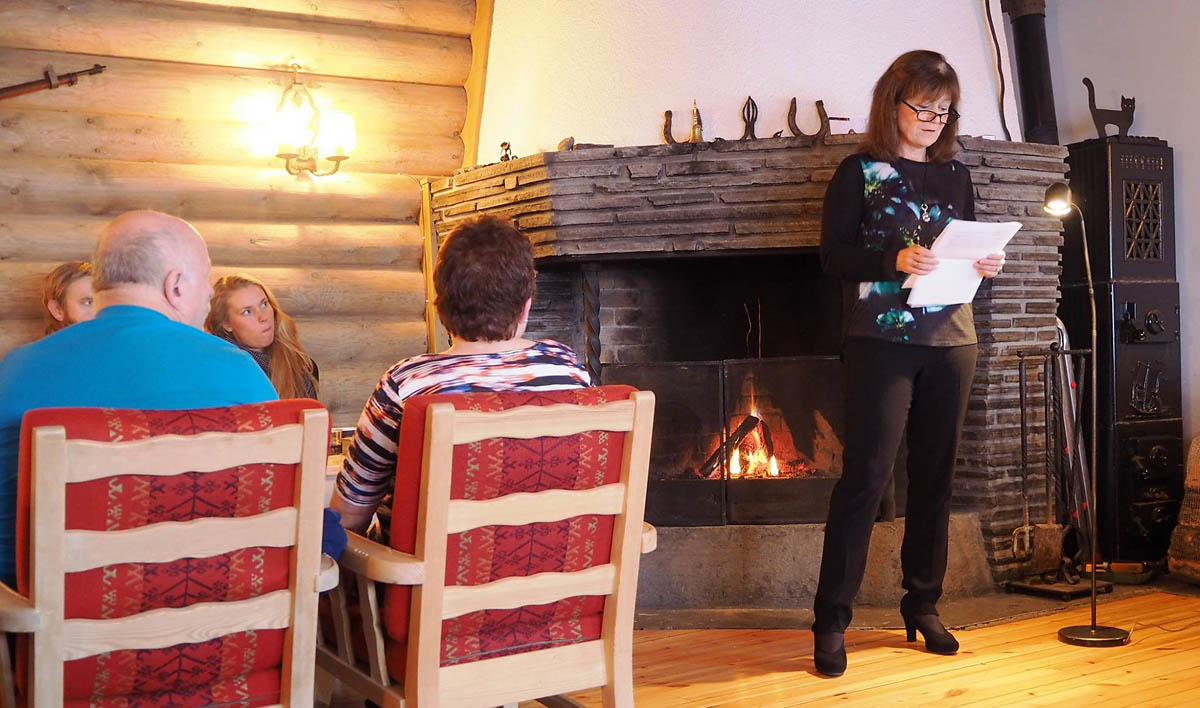 At roughly the same time Kjerstin Askholt was delivering a fireside chat to visitors about the historic home she just moved into, police officers under her authority were rounding up suspects in what may be Longyearbyen’s biggest drug bust in modern times.

The police were still making arrests when the biggest October rain and snow storm in 40 years hit, and just as it was ending her search and rescue team was asked to retrieve a patient on a ship beyond the helicopter’s fuel range.

When asked if her first three weeks as Svalbard’s new governor have been as busy as the past few days, Askholt was able to laugh about the hectic pace and learning process.

“I think it’s a busy position because the governor has to deal with a wide range of issues,” she said.

Askholt, 53, who started the first of a possible two three-year terms Oct. 1, is already familiar with Svalbard since she was head of the Norwegian Ministry of Justice and Public Security’s Polar Affairs Department for 13 years before becoming governor. The department is responsible for oversight of Svalbard and preparing the archipelago’s annual budget, but Askholt said her duties as governor will be considerably different.

“I know a lot about Svalbard policy, of course, but I haven’t had a lot of experience with environmental protection work or police matters,” she said. “I will need time to learn more about those.”

Busy as things seem now, Askholt said she was urged by her predecessor, Odd Olsen Ingerø, to arrive in Svalbard during the fall to become familiar with all aspects of the job since it’s a relatively slow time of year compared to the spring and summer months when the influx of tourists means a lot more rescues and other work.

Askholt said she’s been interested in the polar regions since childhood, when she was reading books about explorers such as Roald Amundsen and Fridtjof Nansen. She typically visited Svalbard six or seven times a year while working for the Polar Affairs Department, but said she applied for the governor’s job because she wanted to be a part of Svalbard rather than merely help shape its policy.

“I love the archipelago and I think it’s a very nice society,” she said. “I love the atmosphere, the people and the culture here. For me to have the possibile opportunity to live here was an opportunity I couldn’t pass up.”

“In the ministry you deal with a lot of papers,” she said. “In this position you meet people directly.”

Among her early encounters with the locals was welcoming them into the governor’s official residence Saturday afternoon for a charity fundraiser that included her presenting a history of the house – one of the many things she’s been studying since she got here.

“I’ve been sitting and reading these two books nearly every evening since I got here,” she said. One is Thor Bjorn Arlov’s notorious “Den Rette Mann” (“The Right Man”) detailing the history of Svalbard’s governors. The other is “North of the Desolate Sea” by Liv Balstad, the wife of Håkon Balstad, who was governor from 1945-56.

“Liv made a lot of efforts to get the residence built, and she and Håkon were the first couple to live there after it was finished,” Askholt said.

“When I came up here everything was organized for me,” she said, a comfort lacking in Svalbard’s early days since there was no official residence for the governor until 1950 (“Store Norske was not particularly interested in providing the new governor shelter,” Arlov notes).

“I can’t imagine how happy Liv Balstad she was to move in there,” she said. “I’ve tried to feel the way as she did.”

In addition to the recreational reading, Askholt is also rapidly getting acquainted with thick official tomes such as official police and emergency rescue regulations as they apply to the archipelago. While she has an extensive law enforcement background, including serving as an administrator and top official at various correctional institutions before joining the Polar Affairs Department, she said the differences between such work on the mainland and here are considerable.

“In Svalbard we don’t have a lot of crime issues – the crime rate is very low here – so the main issue for the police is search and rescue,” she said. “As a governor, there are a lot more details to consider than I’m used to from the ministry.”

While the pilots and police officers are obviously responsible for the actual rescue during an incident like this week’s nearly four-hour flight to reach the boat with the ailing passenger, Askholt has to make command decisions such as whether to ask the Norwegian Coast Guard for assistance and whether to send one or both of the governor’s rescue helicopters. In this instance, the helicopter had to refuel at Hopen before flying about 200 additional nautical miles to rescue the patient.

Similarly, during a police action such as the weekend drug raid, Askholt has to decide matters such as if the police should be armed (they weren’t in this instance), and be personally involved in what she said was a lengthy planning and investigative process that started in cooperation with police in Oslo before she arrived. Eleven people were arrested on drug-related charges, mostly involving marijuana, and the investigation of other suspects is still ongoing.

Askholt said the biggest issue she expects to deal with – both immediately and in the long term – is the same one local and national politicians are grappling with: the crisis resulting from the near total shutdown of coal mining, and how to maintain a stable and economically healthy community in its wake.

“This autumn there will be made a lot of decisions in the government when it comes to the coal company and what kind of other activities the government will support in the future,” she said. “As a governor it’s important for me to give sound advice to the government when they ask, to try to describe for the ministry the challenges this community is going through in an objective way, but in as good a way as possible.”

While some of those discussions have already occurred, Askholt said it’s improper to publicly discuss the details of her advice since “it’s not about political matters.”

“For example, when it comes to developing tourism, there may be regulations designed to address increases,” she said. “The political authorities have to decide for instance if they prefer tourism to be concentrated in the areas around Isfjorden and Longyearbyen, or if they want to spread the activities over a larger area. That’s a political question. I merely tell them it’s important to set as concrete frameworks as possible, for the governor and the local community council to manage within.”

In the long term it will also be crucial to make similar evaluations for expanding other activities such as education and scientific research, Askholt said.

While the Polar Affairs Department is involved in drafting a new “white paper” outlining the government’s policy goals for Svalbard, Askholt said she declined to work on the project because of her desire to apply for the governor’s job.

Svalbard, which is increasing both its international prominence and international presence, is considered one of Norway’s top strategic assets. Askholt said maintaining peace and stability remains an overriding part of the governor’s job even if – despite some recent diplomatic dustups with Russia – the threat of disruptions doesn’t match that of some earlier eras.

“It’s important to focus on it, even though Svalbard today is a peaceful and stable place,” she said.

As for being a host for the large number of world leaders and other dignitaries who visit, Askholt seems more comfortable about that part of the job than her predecessor.

“I’m looking forward to it, but I will need to prepare for it,” she said.

Even though her days are already jam-packed, Askholt said in some ways she hasn’t even started her Svalbard adventure yet. She hasn’t started handling any major regulatory cases or requests from the Norwegian government, and she still needs to get her weapons permit so she can wander out into the wild.