The village relied on the same communal bread oven for 50 years until soldiers demolished it. They brought a new one so the residents weren’t deprived of one of their main food sources, but then destroyed that one as well. And the next.

The oven tells the story of the village itself, which Svalbard Church Priest Leif Magne Helgesen narrates in his new book “Fra Vestbredden” (“From the West Bank”). He spent this summer in the Palestinian village of Susiya as part of an international effort to prevent it from being razed by Israel soldiers, a continuation of three months he spent in the West Bank at the end of last year. 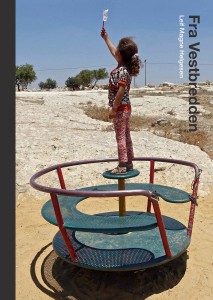 During a presentation and book signing Tuesday at the church, and in the book’s opening, Helgesen emphasized he is not taking sides against the Israeli people, despite his call for a boycott of all products from their country.

“I support the Israelis, he said. “It’s the policy I object to.”

Helgesen returned to the West Bank this summer at the request of Norwegian Church Aid when Israel’s Supreme Court ordered the demolition of Susiya, where about 350 people live. Israeli leaders say the village, which has been demolished several times in recent decades, was initially built on an archeological site dating back to biblical times and remains a “unrecognized” settlement. The village remains standing as of now pending a new court hearing.

“Fra Vestbredden” – published in Norwegian with no plans for an English translation as of now – follows Helgesen’s travels in both the Palestinian and Israeli parts of the West Bank, expanding on his blog of the same name. The linear narrative often portrays stark contrasts in the lives of each group.

A chapter about a Sunday in Jericho, for instance, features pictures and tales of food markets with an abundance of fresh produce, and gathering for worship in comfortable and calm surroundings.

On a subsequent Sunday in a Palestinian village, only a few simple staple foods and some canned goods are pictured at a barren food cart, and the sense of imminent threat is always present – but the residents are just as devout during their five daily prayers.

The following is from a passage in “Fra Vestbredden” titled “Women in Black,” read by author and Svalbard Church Priest Leif Magne Helgesen during his presentation Tuesday:

I am on the way to a demonstration. “Women in Black” meet every Friday at 1 p.m. at a roundabout in West Jerusalem. Year after year they have stood on the same place with their clear message. In Hebrew, Arabic and English they stand with posters shaped like a black hand: “Stop the occupation.”

“Women in Black” is not an organization, but a movement, In many cultures it is a black sign for women to associate. So they constitute a strong protest against war and everything that kills life.

This is a Friday demonstration. We are instructed about not entering into the discussion and to behave calmly. From several windows we get a finger that contains little nice language. “Fuck you” are the shouts in plain language.

“It is better to have a negative reaction than no reaction,” says Marylene Schuetz, 84, She had participated almost every week since the beginning of the 19 years of the demonstrations. Often she has been spied on and gotten jeers.

Many ask her if she is still a Jew since she demonstrates the way she does. She knows who she is. The women dressed in black are Israelis.

“People who are not Jews are also human beings,” says Marylene with a warm smile.
“We wish you dead,” shouts a young man passing by while showing his finger.

“I love Israel, but I’m afraid it will not last for my grandchildren. Extremists from both sides will destroy it. We don’t have good leaders and Palestine doesn’t have them either. It is difficult to make peace with extremists,” says one of the other Women in Black, Momi Morag.