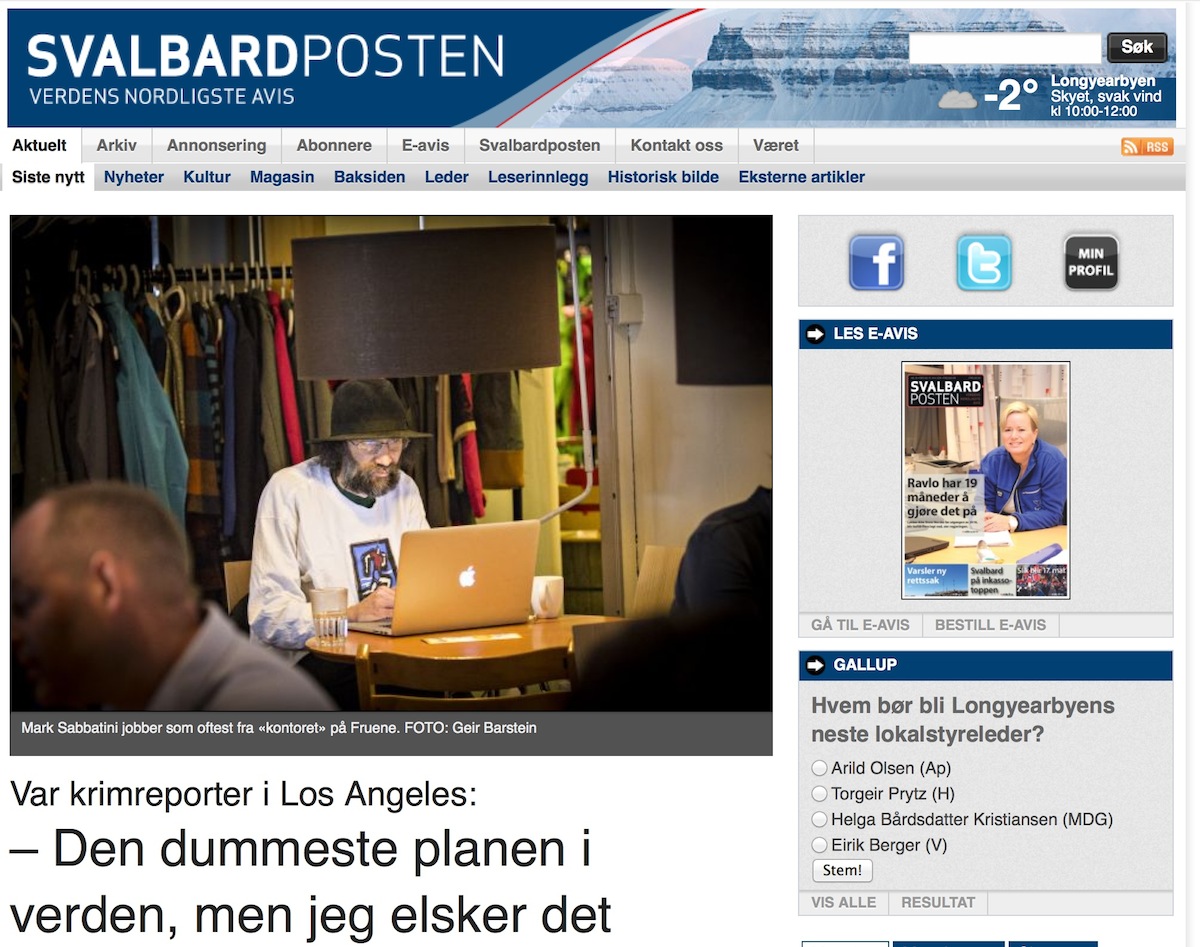 Rant: The most insane journalism ‘full discloure’ ever (win 10,000 Turkmenistan ‘dollars’ if you can prove otherwise)

To start with, I have to disclose I’m clueless about how to explain this without inflicting everyone with a fatal case of diarrhea of the word processer. It goes something like “the author of this article is the subject of an article the subject translated for a publication that pays him in order to directly compete with the publication founded by the subject which is now seeking to…”

OK, time to take a step back, breath deeply, maybe consume a great deal of alcohol and then declare what I have done on dozens of occasions raging from the time we went without butter during the entire Christmas season to the time I spent four days pathetically cuddling a couple of laptop computers in a hospital bed because the weather kept planes from getting me to Tromsø to operate on my broken hip: “It’s Svalbard.”

This is really two stories: how and why an article about me on the back page of this week’s Svalbardposten took almost exactly 30 minutes from a “would you be willing” phone call to the finished article being submitted for publication (and no matter what you think of today’s journalism, that’s a hell of a feat by the writer).

The second is about what I perhaps inappropriately refer to as a somewhat incestuous relationship between myself (mockingly referred to in first-person plural in most of my official scribes on behalf of the world’s northernmost alternative newspaper) and the official local paper of record (notice how I didn’t use any of my usual puns or other wordplay there?). As I’ve said to a few people, my writing often resemble the work of a lunatic, but my goal above all else is legitimately informing people and I take serious matters seriously when needed. So the second part of this may be less amusing than the first.

I was on one of those major deadline rushes at about 1:30 p.m. Wednesday when Geir Barstein at Svalbardposten called and asked if I’d be willing to be their back-page profile for the week. I’m not sure what my first response was since my brain circuits blew a fuse at the thought that 1) he intended to write it in the next 30 minutes before his deadline or, even more improbably, 2) a journalist completed all of his work before deadline and was getting an early start on stuff for the next issue. Essentially, it came down a few exchanges of us both declaring we were in the death-grip of deadlines and his declaration was more sympathy-inducing than mine.

I walked across the street, said nothing clever or witty during my 10 minutes, so you can blame me instead of him if you find I’m a dull subject (journalists frequently are – the good ones write/show what other people who are interesting are up to). I have no idea what madness occurred in the 20 minutes after I left and don’t want to subject Geir to possible trauma by asking him to relive it.

Anyhow, the next part is where it gets a step weirder.

One of the few responsible things I’ve done during the past year (and maybe ten) is translate some of Svalbardposten’s articles into English for their website. While that might seem like a sacrilegious thing for a guy publishing the alternative newspaper in town to do, I gratefully accepted the work because 1) I and some journalist folks back home I consult with (the masthead isn’t strictly a joke) agreed merely translating articles isn’t the same as doing journalism for them (althought that’s a subject for another “full disclosure” at some point) and 2) I really needed the money.

Of course, the powers-that-be across the street decided to include the profile about me in this week’s batch of articles, either because 1) they actually thought it would be of interest to English readers or 2) they decided it’d be fun to mess with me.

I’ve been the subject of many articles, TV and documentary interviews, and even once got featured in a coffee table book because I drive what’s probably the most impractical car in town (I look like your typical depressed guy suffering from a midlife crisis standing in front of it), and there’s always stuff I want to tweak. While that’s actually a good reminder I should be extra careful with my articles so the people I interview don’t feel the same way, obviously indulging in the temptation to do so with a profile of myself would be a very, very bad idea.

So I left it alone as much as possible, including one reference in particlar that stated my finances are such that I’m publishing this “week to week.” There’s a big “yes, but” to that – which didn’t get mentioned quite as well as I’d like  in that I have some emergency options like selling my tiny apartment to keep this going, but let’s just say I’d rather come up with something responsible like making this fishwrapper respectible enough (OK, forget that – crazy and amusing enough) to lure enough advertisers and supporters to keep it afloat. (And, as I’ve said before, if anyone want to give me a job washing dishes for 15-20 hours a week, that’d do the job too).

So the article’s out there if you’re able to break through their paywall. If not, the Norwegian headline basically quotes me as saying I created the world’s dumbest business plan and I’m loving it. That’s certainly true, so the rest is just details.

Meanwhile, in the spirt of that rushed article, I wrote this in about 40 minutes after turning in the translated English version, as much to spread the word Icepeople isn’t vanishing in the near future as much as to explain how the news business in Svalbard, like just about everything else, doesn’t quite operate as normally as the rest of the world.

P.S. Oh, yeah – about those 10,000 Turkmenistan “dollars”: If you can find a “full disclosure” more twisted than this one, I will hand you a bank note from my world travels that will trick you into thinking you’re quite wealthy, at least within the borders of that country. I actually came back from that tragicomical country after one of my more blundering jazz missions with hundreds of thousands of manat that I ended up not being able to exchange at any currency trading place in the civilized world. They reissued a “new” manat a few years later worth 1/5,000th of the “old,” so already you’re down to a couple of bucks, so to speak, if you try to use my note there. And those “bucks” are worth about five kroner, by the way, which might actually buy you a short cab ride there under their insanely subsidized system, but not much of anything else.

Published in Svalbard and Rants