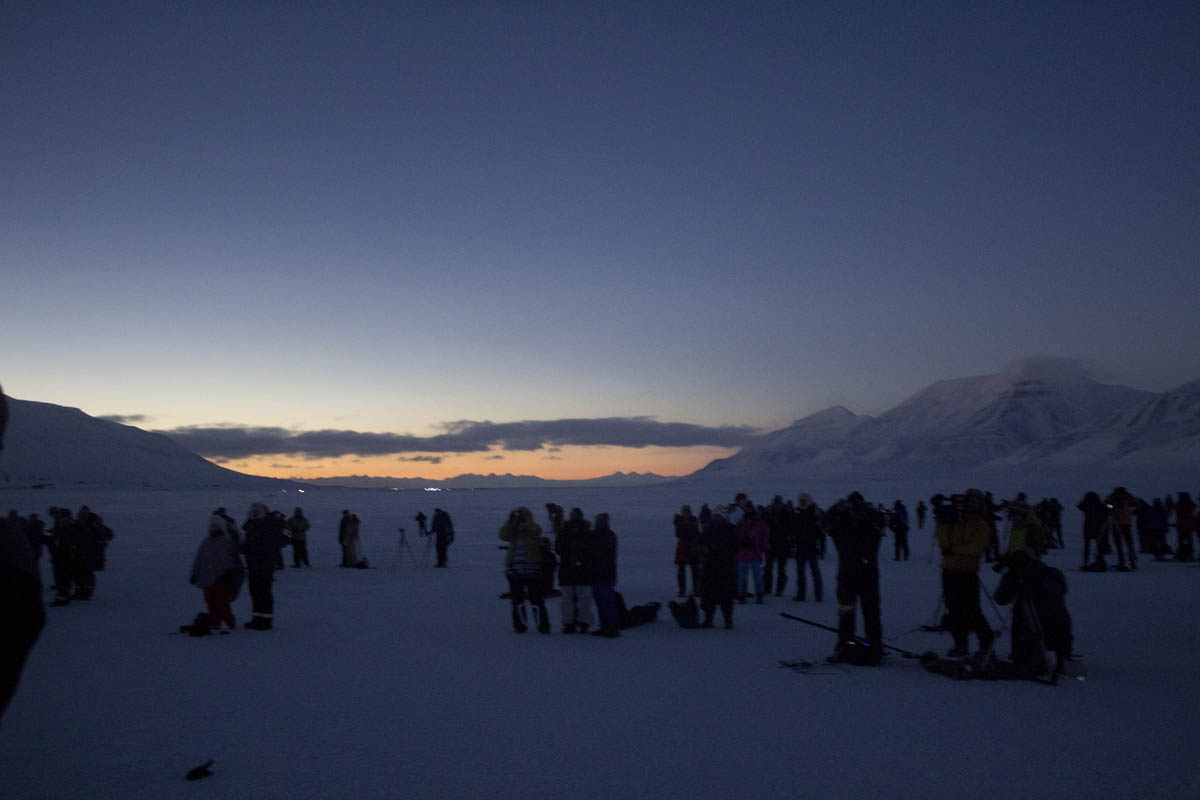 “I’ve never seen so many phenomena during an eclipse,” said Kathy Biersdorff, a Calgary resident watching her 11th total solar eclipse since 1979. “You picked a fabulous one.”

After a week featuring a near-hurricane blizzard, widespread and bizarre media inquires about things such as whether Svalbard would run out of food due to all the visitors, and a polar bear attack at a campsite that resulted in non-fatal injuries to one man, the biggest remaining question was whether the week’s cloudy skies would clear by Friday morning.

The odds of seeing the sun – or more precisely, seeing it completely blocked out by the moon – were described by forecasters as 50-50. But on Friday morning the sun – which only two weeks earlier wasn’t even visible in most of Longyearbyen as the surrounding mountains kept it hidden even after the official end of the four-month polar night – rose brilliantly over a mostly clear sky in a large valley just east of the city limits where the large crowd of eclipse watchers gathered in the -20C cold.

“I was so lucky. I almost can’t believe the weather,” said Kari Stokke, hotel manager for Spitsbergen Travel, who suddenly found herself serving hot dogs and hot chocolate to nearly 400 elated guests in a giant warming tent in the valley about 10 miles east of Longyearbyen.

A budget poll of questionable scientific value conducted by Icepeople (a.k.a. our editor shouting out “excuse me – is there anybody here who is unhappy with the weather?” at everybody in the warming tent) indicated 100 percent of respondents felt “very good” or “excellent” about the skies that were virtually cloudless when the eclipse officially began at 10:11 a.m.

Most of the viewers were with an organized tour group and while they shared certain similarities – most were fairly affluent and in their 50s and 60s – their nationalities and experiences with eclipses varied widely.

Among those describing themselves as a “serious amateur” was Rob Hawley, 63, a retired engineer from San Jose, Calif., viewing his 12th total solar eclipse since 1970. He said eclipse tourism “a good excuse to go places” and his “bucket list” for Svalbard included the hope of seeing the northern lights at the same time as the eclipse for the first time.

William Mangold, 65, on the other hand, was an outliner in the group since seeing Svalbard was the primary motivation for the trip and the eclipse merely a nice bonus.

“I was in Antarctica two years ago so I had to come here,” he said. “I feel a little bit weird the eclipse isn’t why I’m here because for everyone else it is.”

Clusters of observers talked mostly about photography techniques and previous experiences during the hour leading up to the moments of totality.

“Stand out there facing the crowd and take a picture of them using a flash right at the moment of totality – they’ll love you for it,” was Bob Justis’ “advice” to one bystander. The Germantown, Maryland, resident who was viewing his sixth total solar eclipse since 1970, hastily informed a total novice within earshot (our official pollster) the advice was an obvious joke to someone possessing a clue since, in addition to reflective strips on most people’s clothes making any flash picture useless, the flash would destroy people’s “eclipse vision.”

Many observers didn’t spend the hour leading up to the moments of totality exposed to the elements, ducking inside the warming tents or the still-running busses that brought them out to the valley. Inside the tent a trio of fabric tubes blowing warm air were used to heat everything from feet to camera batteries to food that had frozen during the wait outdoors.

“It’s like Thanksgiving,” said one woman nibbling a now-warm sandwich. “I roasted a turkey.”

The perceptible difference in daylight was small as the sun shrank to a tiny sliver of a crescent just minutes before the moments of totality, prompting some first-time viewer to speculate it might be because of the reflection from the vast white snow plain.

But Biersdorff said the extreme Arctic setting had little effect on lighting during the vast majority of the eclipse.

“That’s why people who see 99 percent of an eclipse say ‘I don’t see what the big deal is,'” she said. “My hope is we have the northern lights. That would be perfection.”

Joined by husband, Richard Patching, and a couple of friends, they began noticing a change in their surroundings about two minutes before the moments of totality.

“The lights have come on at the mine,” Patching said about a minute before the eclipse became total. The quartet speculated as to whether the scores of sled dogs in nearby kennels would begin howling and all around them a general buzzing intensified to a roar.

“Twenty seconds” a woman a dozen meters away shouted out. Those daring to glance in the opposite direction could see the lights of Longyearbyen come on and a brilliant “sunset” illuminate the far horizon in the fjords. “Here we go.”

“Oh man…this is so amazing,” Biersdorff said breathlessly, as she and her companions began shouting out a list of observed phenomena.

The 147 seconds of totality from 11:10:02-11:13:09 a.m. – in which the valley was dusk rather totally dark – passed in a flash almost matching the near-instant return of light to the valley as the sun emerged from view behind the dark side of the moon. A huge roar resounded from the crowd, many of whom immediately begin scrambling inside the warming tent and into the heated busses nearby.

Although the northern lights weren’t among the observances tallied by Biersdorff’s group, she was utterly and uniquely elated by the unprecedented number of things she experienced.

“OK, there’s only one thing missing: champaign,” she said. Fortunately that was covered too, as a cork popped almost immediately nearby and her husband returned moments later with two bottles (“no need to put them on ice up here” a passerby quipped) and 50 paper cups, and the couple began handing them out to the revelers heading toward warmer places to celebrate.

Anne Lise Sandvik, 66, a Longyearbyen resident for the past 42 years, watched the eclipse from another set of warming tents a few kilometers away in the valley. She said she’s seen a partial eclipse from Svalbard before, but nothing like Friday’s event.

“It was amazing,” she said. “I would not have gone across the Earth to see it, but I’m glad I saw it.”

Sandvik, known as one of the town’s most active organizers of community activities, is something of a local legend when it comes to unique stories to tell. But she said the eclipse will be among those that are most memorable.

“It’s among the most special things I’ve experienced,” she said. “Of course, it’s amazing to just lay out on my snowmobile at my cabin under the northern lights.”

Elin Anita Olsrud, 51, the head librarian at the public library since moving to Longyearbyen from Oslo 18 months ago, said she and a small group of friends watched the eclipse from the top of a  mountain a short snowmobile ride southwest of Longyearbyen since she, like nearly all Svalbard employees, closed their shops and offices to see the peak moments of the eclipse.

“It was just the five of us and nobody else, so that was amazing,” she said.

Like Sandvik, Olsrud said she’s seen a partial solar eclipse from Oslo, but Friday’s eclipse ranks with the best of her already numerous Svalbard experiences, including her first snowmobile trip.

“It was fantastic,” she said. “There’s nothing like it. It was hard to come to work afterward.”