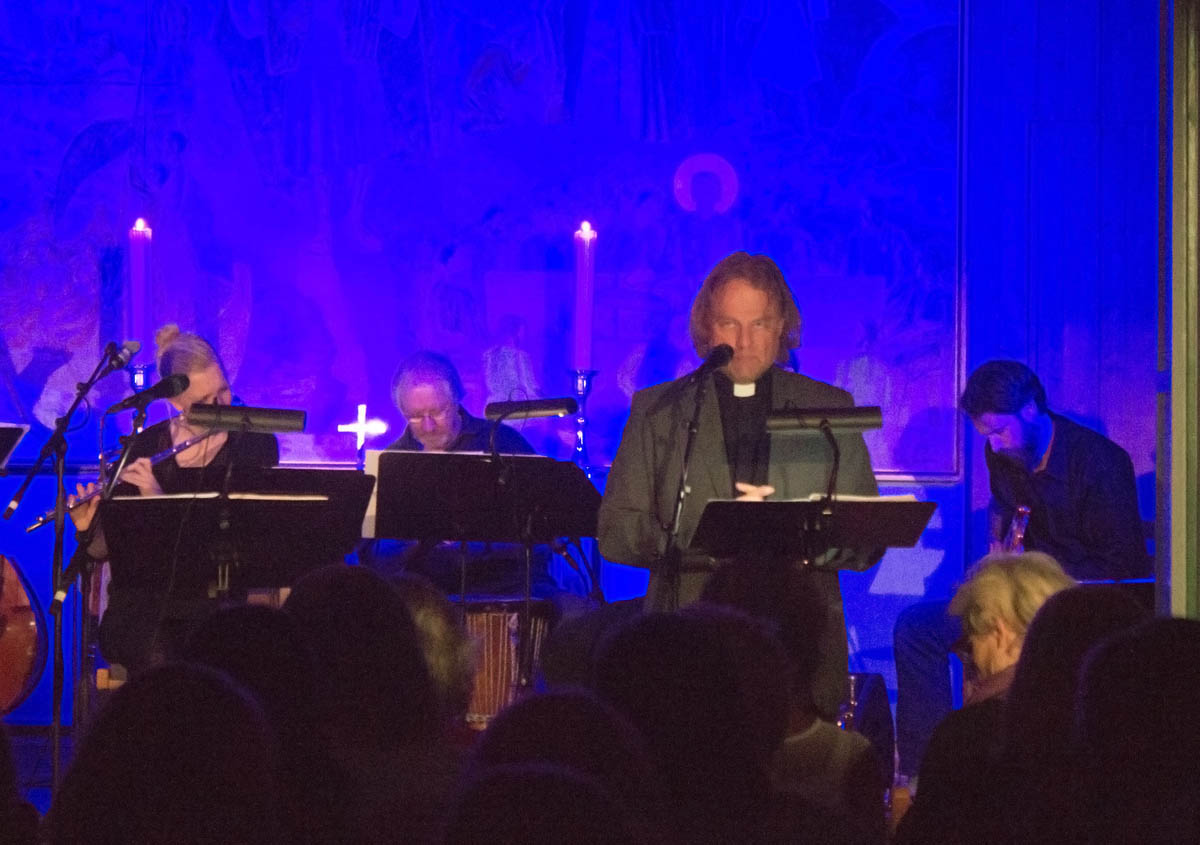 Spend 18 months writing a complex Mass and then bring in a handful of musicians to learn it during a week they’re busy with other projects? Challenging, certainly, but it’s not like trying to bring peace to the Middle East.

Leif Magne Helgesen would know. The priest at Svalbard Church returned home in January after spending the last three months of 2014 in the West Bank helping Palestinians and protesting illegal Israeli settlements.

As if that wasn’t enough challenge (and controversy) to take on right before the premier of his sacred suite, he also debuted a new book about the ethics of climate change three days before the show.

“It was a bit rushed this week,” he acknowledged of the rehearsals.

But the performance of “Svalbardmesse”  by the Svalbard Kirkes Trio and three guest instrumentalists at the church brought this year’s Polarjazz festival to a blessed end Sunday night. The 75-minute Mass, the subtitle of which translates in English to “Hymns Above the Frozen Soil,” was an ethereal leap in ambition and composition from the short and mostly a cappella works by the trio after they formed in 2011.

“When you start out you don’t know if you can succeed,” said Helgesen, noting they’ve “been working on it from time to time” when he hasn’t been away or involved with other projects. “This is what we could dream about.”

Helping make the show itself happen was another returning longtime Svalbard inhabitant, albeit from a different era and a much longer absence.

Finn Sletten, 62, grew up in Ny-Ålesund after moving there with his family when he was only a year old, then departing about a decade later following the tragic Nov. 5, 1962, accident that killed 21 coal miners. He played a djembe and other percussion during the Mass, as well as during a jazz/funk concert Friday night as a member of Bugge Wesseltoft & the Organ Club – only his second show with that band since joining it in December.

“That’s just how he is,” Sletten said of the Hammond organist who formed the band. “He tries lot of things.”

Festival organizers were hoping to send the band to Sletten’s childhood hometown for a first-ever Polarjazz concert there Saturday, but were thwarted by bad weather. It was one of two festival shows scheduled outside Longyearbyen, as yet another wayward local – Ragnar Ólafsson, a former student at The University Centre in Svalbard – returned after seven years as a member of the Icelandic band Árstíðir for a Friday night concert in Barentsburg.

“It was in Svalbard I found out I could sing,” the vocalist/keyboardist told the audience during a show in Longyearbyen the following night. He said his first gig was for a Store Norske Christmas party that got a little wild.

“I liked it so much I took off my shirt and started crawling on the floor like I’ve seen singers do, and I’ve been doing it ever since,” he said. “I’ve been waiting seven years for a chance to apologize. I’m here to try to make up for it, pay some dues.”

While Ólafsson said afterward his hands were shaking during the first couple of songs because he was nervous about returning to play in front of his friends from UNIS (and his parents, who are instructors there), Sletten said playing a couple of vastly different gigs on-the-fly was just part of the job. The drummer has played with a wide variety of mostly jazz bands since 1972 and in 2009 was awarded the biennial Stubøprisen, the highest honor given to a northern Norwegian jazz musician, for being “a significant pioneer and source of inspiration for several generations” of musicians.

Sletten, now living in his birthtown of Bodø. has returned to Svalbard regularly to perform concerts since 1986, when he “was hired to play in the kindergarten with a person who was signing.” He said he hopes to return during next year’s Polarjazz and play in Ny-Ålesund, which has made a drastic transformation into an international research community after the tragedy four decades ago brought a halt to mining there.

“I think what they do there is important,” he said. “In that way I’m kind of proud my hometown has become what it has become.”

Sletten was recruited for the “Svalbard-masse” concert by Espen Rotevatn,  a member of the church trio who composed most of the music with Deacon Torunn Sørensen. Rotevatn said the trio was seeking musicians with strong local ties who could relate to the theme of the suite and perform it accordingly on short notice.

“You have professional musicians,” he said. “You know how fast they can work when they are in working mode. I wasn’t worried about that.”

The bigger concern, Rotevatn said, was the trio’s ability to master the complexity of the Mass itself, written by Helgesen, and convincingly proclaim its wide range of spiritual emotions.

Helgesen said the Mass is about “Svalbard as a metaphor, using the nature, using the elements of dark and light.” While there are recognizable elements of a traditional Mass such as The Lord’s Prayer and “Gloria,” “it’s also totally different words and also the music is somewhat more local.”

A composition early in the Mass, titled “Isen Smelter” (“The Ice is Melting”), captures many of the conflicting spiritual moments in succession. A gentle a capella opening by the trio is followed by very deep and chaotic piano  sprinklings by Rotevatn, ominous percussion wisps from Sletten, faint horn warblings from Hans-Gunnar Skreslett (who said he improvised most of his playing during the show), and   Sørensen singing with a convincing tone of fear. Yet, from there the instrumentation and lyrics progressed into what Helgesen called “conflict, peace (and) hope we can change the future.”

Those are themes the priest is focusing on heavily these days, as three days before the concert (just as Polarjazz was getting into full swing) he unveiled his new book, which in English translates to “Melting Ice – Ethics in the Arctic.” Co-written with Kim Holmén of the Norwegian Polar Institute and Ole Arve Misund of The University Centre in Svalbard, it focuses on the impacts of climate change and ethical responsibility people have to limit negative consequences.

“I believe and hope that this is an important book,” Helgesen said during the launch, according to Nordlys. “That it is not only heavy in number of pages, but that it is actually something that could help initiate a process further where the Arctic is a barometer.”

The “Svalbardmesse” concert was an unusual choice for Polarjazz, which usually schedules a visiting artist for the finale. Attendance was modest compared to past years, with the church only half-filled, but Helgesen said  afterward they are hoping to do multiple performances, including some on the mainland, and possibly a recording.

Published in Svalbard, Audio and Video